Earlier this year, Maxis came up with a special kind of ang pow that you can plant and hopefully grow into a tree. We thought that was kinda impressive, and hard to top. But top it they did when we recently found out that they’re giving away special ang pow packets for Deepavali, called Deepagrams. In case you’re wondering, that’s a mashing between Deepavali and… holograms. Walao weh!

No, not the kind of hologram you see on genuine medicine boxes. It’s 3-D yaw! Normally, the excitement of receiving ang pow pretty much ends after taking the money out of the packet. But the Deepagrams also had a sort of extra gift inside: a piece of plastic that turns special videos on your smartphone 3-D. Watch the video:

Ok we know… you think it’s like those toys that you get with your cheap chocolates right? On TV dem amazing, but real life it’s a broken piece of plastic. But NO, we actually tried it in the office and OMG IT ACTUALLY LOOKS SUPER COOL. So basically you take the piece of plastic out of the packet, assemble it into a sort of pyramid, scan the QR code at the back of the envelopes to get the special videos, place the plastic thingie on your phone and watch the picture pop up. The QR codes lead to Deepavali-themed holograms, but there are a lot of other videos just floating around in YouTube you can bring to life as well.

Apparently they’re giving the packets out for free to Maxis customers since the 12th of October until they run out of packets. To get them, just go to a Maxis shop, do something like pay your bills or whatever, and ask for the packets.

“This Deepavali, we wanted to turn every money packet into a gift of light. Deepagrams make light shareable in a way that’s never been done before using technology. And most importantly, this light becomes a gift that brings joy to the people that mean the most to us,” – Tai Kam Leong, Head of Branding and Partnerships for Maxis.

But what if you’re not a Maxis subscriber? Well, the plastic thing is pretty easy to make, but it still takes a little bit of effort lah. A lot of pages on the Internet can tell you how to make one, but essentially all you need is a bit of hard transparent material like an old CD case, cut it up and tape it together to make a shape like a pyramid with the top cut off. 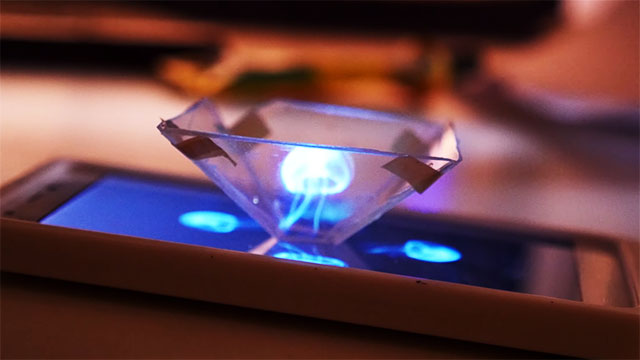 You can use any smartphone for this. Img from DeMilked.

Then just Google for ‘hologram videos’ to test your DIY project. Or, if you’re feeling lazy, you can buy some at Lazada for like 50 bucks.

Traditional celebrations are getting more modern

In recent years, we’ve seen how modern elements are slowly creeping into traditional celebrations. For Hari Raya and Deepavali, for example, more and more people are replacing oil lamps with fairy lights. Text messages and Facebook statuses are replacing old-fashioned greeting cards. And there’s this:

For those of you who didn’t watch the video, those are augmented reality Hari Raya cards sold by Pos Malaysia. In a sense, you’d still have to post the card, but once received you can see 3D animation playing on top of the cards through your phone by installing a special app. How modern!

Even though some may rue the fact that technology is slowly but steadily getting into tradition, like how youths today look at their phones more than their families during family gatherings, there is good in technology too. For example, people who can’t go home for the holidays may still keep in touch with their families. And although it may seem impersonal, sending the season’s greetings is a lot easier to all your contacts with texts and messages.

At the end of the day, it’s all about how you perceive and find the comfortable balance between modern and traditional stuff.

On another note, look! A hologram of the late Tupac!

Technology is awesome. Img from Tumblr.