Recently, an explosion at an MRT station in Bandar Malaysia was said to be caused by……. a World War 2 bomb?! Huh, really meh? Tragically, 3 foreign workers were caught in the blast, 1 is still in critical condition while the other 2 have died. The Works Ministry said they’d investigate more on how it happened.

For all of you conspiracy theorists out there crying “B.S, where got WW2 bombs that still exists?” it’s actually not the first time a WW2 bomb has exploded in the 21st century. Back in 2014, a German man accidentally knocked a digger against a WW2 bomb killing himself and injuring 8 others and destroying nearby buildings. You guys might think “Haiyah if somebody find a bomb right, of course it will explode lah”. According to the German police however, despite regularly finding WW2 bombs, it’s uncommon for them to explode.

Finding WW2 bombs back in Germany is nothing special, but how come can find in Malaysia?

For that we have to take a short Sejarah lesson.

How did these bombs come to Malaysia in the first place?

Waaaaaaaay back in the December of 1941, the Japanese began their conquest of Malaya. The main reason was, Japan was a small country with not much resources so they relied on trade. But when the Western forces stopped oil, iron and steel from reaching Japan, let’s just say the Japanese were super pissed.

So they decided, why not conquer the western colonies in Asia and have all these amazing resources for themselves?

The British naval base in Singapore though, was a major problem for them coz the defenses there were TOP-NOTCH. But they were all facing the sea, so the Japanese decided to attack by land from Malaya. The picture below shows how the Japanese invaded. After fighting many battles in China, the Japanese soldiers were too pro for the British soldiers and the fact that the Brits severely underestimated the Japanese caused them to lose Malaya. The Brits had no choice but to retreat back to Singapore. Photo from the Star 2

They decided to steal bikes from the locals and travel all the way down to Singapore. In less than 2 months, the Japanese won the war. It was the worst loss the British army faced in history.

October 1944, the British army finally struck back. Various strategic bombings and multiple navy attacks were carried out by the Brits throughout Malaysia. On 15 August 1945, the Japanese finally surrendered.

Coming back to the present day, the bombs that could be found in Malaysia are probably Japanese, British and American. Since the Brits and Americans were on the same team, they “shared” their weapons. For example the first strategic bombing by the British in Malaya during the Japanese invasion were done using American planes.

Quite a number of bombs have been found in the past 10 years throughout Malaysia but only 1 has been confirmed to be a British bomb.

Unlike London for example, when it was bombed 57 NIGHTS IN A ROW during WW2, Malaysia wasn’t as heavily attacked as other countries like the U.K, France or Germany. It’s not as if we have 300 million bombs in our backyard, so maybe we can chill a bit kot?

How come still can explode? Scratch that – why HAVEN’T they exploded?! 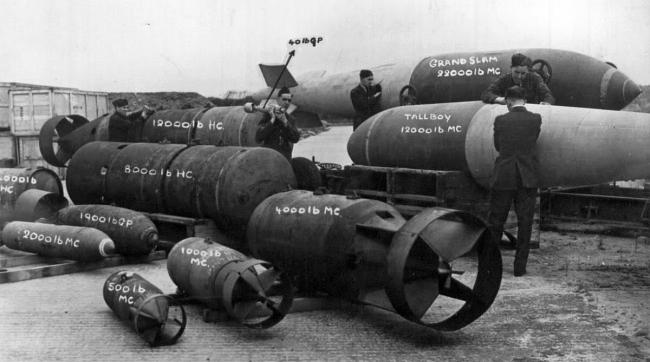 How WW2 bombs looked like. Photo from Daily Echo

During WW2, airstrike was all the rage, and that’s how most bombs were released. Because any hard jolt would make the bombs go KABOOM, a safety pin was placed through the fuze propeller so it wouldn’t spin. The pin would be attached to a string, attached to the plane and when the bomb dropped, the string would remain with the plane and yank the safety pin away. The propeller would start spinning as the bombs falls, which drives a screw to push the electrical connection into the detonator charge. The fuze also has timers built into it, so blasts would be more effective.

You might say “Nobody cares how it works, just tell me why didn’t they explode?”

“Some bombs were simply duds – casualties of fast, furious and error-prone wartime manufacturing. Others may have suffered damage to the fuse typically used to detonate the bomb, or to the clockwork time-delay mechanisms that were sometimes used” – Matt Brosnan, historian at the Imperial War Museum.

These unexploded bombs could’ve created a mini crater and been covered by dirt from nearby explosions or construction work, basically hidden from the world.

Experts say, that though unlikely to explode, these bombs are dangerous coz of their unpredictability. Over the years, these bombs have become very sensitive that even touching it might cause it to explode!

An antique seller from Penang though, defied the odds by not exploding when he carried a bomb he found in a plastic bag at Air Itam Dam all the way to the local police station. Wasn’t he a lucky guy?

NAH, BACA:
Has your dad ever done something brave for you? We want your story.

What does the government do about this?

There was a case in Frankfurt, Germany when 60,000 people had to be evacuated coz an enormous WW2 bomb was found on a building site and had to be defused. The bomb was too unstable to be transported and any attempts might cause an explosion!

Usually whenever a bomb is found in Malaysia, the bomb squad would be called to deal with it. The bombs are usually defused or detonated. 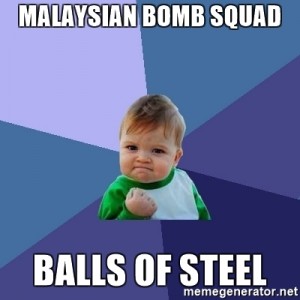 Sometimes it’s not always clear what’s done to the bomb. For example, when a WW2 bomb was found in a residence area in Batu Pahat, the bomb squad was said to remove the bomb 100m away from the area. Nothing was mentioned about what happened after.

But Malaysian bomb squad also got problem lah. A 250 kg active bomb was found in Sandakan, Sabah and it took the Sabah bomb squad 2 days to arrive at the crime scene.

In the U.K, a guide was released so that people know how to deal with unexploded bombs while in Germany, a special bomb disposal unit KMBD handles all unexploded WW2 bombs.

So… how to know if there’s a bomb under your house?

The thing is….. you don’t. Metal detectors can be used to detect bombs but, bombs aren’t the only thing made out of metal that could be hidden underground. Radiation detectors as well won’t really work, since the bombs that have been used during the Japanese invasion in Malaya weren’t atomic or hydrogen bombs.

There are ways that some people claim is a sure-fire way to find a bomb, but it takes SO MUCH TIME! You’d have to research where air raids done, then you’d have to use a software to find how deep the bombs might’ve traveled, do an electromagnetic survey, yada yada yada. Too much work basically. 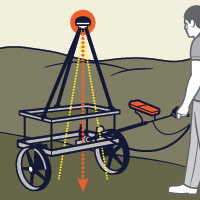 Step 2 on how to detect a bomb. Photo from The Wired.

Construction workers are most at risk to stumble on WW2 bombs since ya know, they dig a lot. Sounds weird, but isn’t that what they do? That’s why in Germany, any construction project has to be approved by the KMBD to make sure there aren’t any bombs at the site.

That being said, unlike Germany, Malaysia wasn’t bombed with 2.7 million tonnes of bombs, so it’s quite rare to find these bombs. As  Minister Datuk Seri Fadillah Yusof said:

“Normally, the developer will acquire the underground blueprint from the local authority but at the construction site, the situation is different.”

Although there aren’t any specific hotlines to call if you find a bomb, from previous cases in Malaysia, you just call the police. Also just back the hell away from that object that you think is a bomb coz what if it really is a bomb? You don’t wanna end up as barbecued human meat.