Have ugaiz ever pass by any construction sites like this… … and fear for your safety? Well, imagine those who work there!

Average working Malaysians like us have social security protection under the Social Security Organisation (SOCSO) which would financially aid us when we kena accident or infected by any occupational disease while at work la. However, foreign workers (who also work at construction sites like those pics above), aren’t protected under SOCSO (more on this later).

But just recently, the Cabinet decided to place foreign worker’s social security protection under SOCSO starting 1st January 2019. This would mean that foreign workers may get similar benefits under SOCSO like us too.

Although this sounds like a wonderful news, we actually found out that…

Foreign workers were protected under SOCSO a looooooonggg time ago

Orait, at this point, we know some of you have questions like what are foreign workers protected with (as of the time of writing) and why the sudden change.

The Cabinet decided to change foreign workers’ social security protection as it is reportedly in line with some conventions we ratified under the International Labour Organisation (ILO). One of it is called the Equality of Treatment (Accident Compensation) Convention 1925, which was ratified in 1957 in Peninsula Malaysia and 1964 in Sarawak.

Tell us why… Unedited image from Nepalee.com

The gomen decided to change this cos it was based on the concept of equity. It also claimed that a study revealed that the lump-sum pay under WCS was significantly higher than whatever payment foreign workers received under the previous scheme. But who doesn’t love getting lump-sum money? Image from Iluminasi

Well… if that lump-sum money is enough to support your needs and family, then okay la.

We got in touch with Joseph Paul, Director (Business Accountability & Responsibility) at a human rights group, Tenaganita, who told us that the current gomen may be getting a lot of pressure from NGOs like the Malaysian Trade Union Congress (MTUC) to treat foreign workers on the same footing as local workers, hence the decision to change foreign workers’ social security protection under SOCSO.

And he may not be wrong tho. We found out that ILO has been requesting Malaysia to change the legislation to adhere to the provisions of the convention we ratified. Because, at the time of writing, foreign workers aren’t protected like us.

For instance, we are entitled to have social security protection if we earn less than RM3,000 while foreign workers AREN’T if they earn above RM500 and are non-manual workers.

So, the current gomen’s move may be a good sign for the foreign workers la. But there’s something you may need to know and that is…

20% of foreign worker’s salary may be deducted for SOCSO!??

If ugaiz dunno how SOCSO works, here’s a TIL for you.

Basically, after you’ve become a registered worker, you may have to make small payments to SOCSO when you get your salary. That is about 0.7%, according to SOCSO, depending on how much you earn la. That’s not all. Your employer is responsible to contribute to your SOCSO. Check this table from SOCSO out to understand more: The table is actually longer than this. Click image to see the full rate. Screengrab from SOCSO

Alright, now that you have a basic idea on how it works, let’s move on to our story.

It was also reported that the deduction from foreign workers’ pay would be kept in SOCSO as savings contribution (pretty similar to EPF actually) and they would only receive it when they leave after their working permit ends. And, at the time of writing, it was reported that most employers welcomed the proposal. 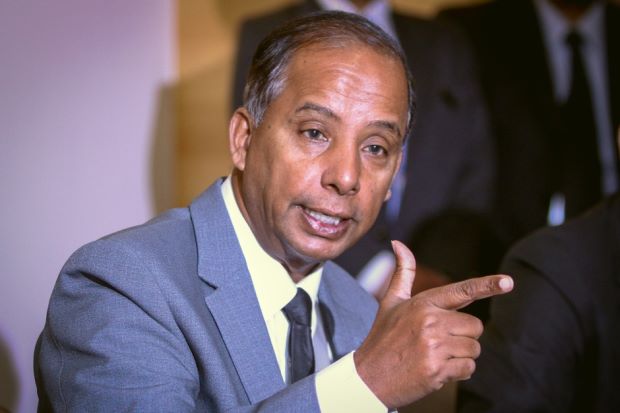 Of course, they would! Btw this is M.Kulasegaran. Image from The Star

When we got in touch with SOCSO, it was unable to give us comment as to how M. Kulasegaran came up with the proposal to cut 20% off foreign worker’s pay since it is still under discussion.

Some of ugaiz may think that since foreign workers may be getting the same benefits as us under SOCSO, it may be logical for their salary to be deducted that much. FYI, SOCSO shared that foreign workers would be getting benefits under the Employment Injury Scheme such as medical benefits and temporary disablement benefits, among other benefits.

However, we also found out that foreign workers wouldn’t be covered by the Invalidity Pension Scheme under Act 4. According to SOCSO, this would mean that they may not be entitled to education benefits, facilities for vocational rehabilitation and dialysis under invalidity scheme.

At the end of the day, it’s not only about how much foreign workers would earn after this 20% deduction (which is lower la considering they may only get RM880 if they were to earn RM1,100 by next year). Joseph Paul told us that most foreign workers who came here to work have difficulty in meeting the expenses at home and are in debt.

In fact, the MTUC secretary-general, J Solomon mentioned that foreign workers were only interested in sending some money back home to support their families. We’ve even wrote about this sometime ago.

“By the time they get the money, they’ll probably lose their home and their kids cannot go to school.” – Joseph Paul told CILISOS.

Just look at how much people at Merchantrade! It works somewhat like Western Union. Gif from TeknoRatz

But who will be affected by this anyway? Construction workers, kakak cleaners or expats?? Or all of them!?

According to Malaysia’s Immigration Department, foreign workers are people of a certain nationality such as Bangladesh, Laos, Indonesia and India, among others la. They could only work in a certain industry like constructions, factory, plantation, agriculture and services.

According to SOCSO, there are 1.98 million foreign workers in the country!

Joseph suspected that the expats won’t be facing this cut. However, SOCSO told us that although expats are included in this social security protection, domestic workers aren’t.

And if you’re an employer, you may wanna bear in mind that you can’t simply hold back foreign workers salaries. SOCSO told us that it would ensure employers are responsible to register and contribute about 1.25% of the workers’ salaries to workers’ SOCSO.

“It is compulsory for employers to pay foreign workers’ SOCSO contribution within 7 days after pay day. Failure to do so would be an offence under the Employment Act 1995 enforced by the Department of Labour.” – SOCSO told CILISOS.

Is this move reaaaaaallllllyyyy in line with the convention we ratified??

We mentioned earlier that the Cabinet decided to place foreign worker’s social security protection under SOCSO as it is in line with the Convention we ratified years ago.

Since the 20% cut from foreign workers’ salaries are considered savings contributions, The Federation of Malay­sian Manufacturers (FMM) thought it may be more in line with the Employees Provident Fund (EPF) instead. This may be why the organisation had requested more info on this.

But social security insurance, apparently, seemed to work in Japan and South Korea. For instance, in South Korea, all workers including foreign workers regardless of age and visa status must be covered by an Industrial Accident Compensation Insurance. And South Korean employers are solely responsible for paying the insurance contributions ranging from 0.7%-4.2%.

But dun worry la, our neighbouring country also dun have this. Singapore’s social security scheme only covers its resident and permanent residents but NOT foreign workers who are temporary residents. Not only that, Singapore made no social security agreements with other countries. Aside from getting paid less, foreign workers who are temporary residents also dun get social security wei! Click image to read why Malaysians are paid less in Singapore

And while this proposal may seem good for foreign workers, some NGOs raised some concerns they had over this idea. The co-founder of Tenaganita, Aegile Fernandez actually told the gomen to send foreign workers home if it couldn’t protect their rights. She also mentioned how Malaysia is known to have the highest number of foreign workers put in forced labour conditions.

Other than that, the Malaysian Bar also believed that the gomen could implement its proposal to develop a comprehensive policy framework for migrant workers. The president of Malaysian Bar, George Varughese proposed that our gomen to work closely with the country-of-origin gomens to fine-tune the recruitment system.

Joseph also suggested for the gomen to discuss the matter with foreign workers themselves. This is because he mentioned that foreign workers shouldn’t be discriminated in any way under this convention.

“You are concerned without deductions they will jump high and low, but we don’t respect that the migrant worker is a worker and has the right to tell whether any amount of money can be deducted and for what reason.” – Aegile Fernandez to FMT.

As of now, we shall just wait for the gomen’s decision, especially on the 20% pay cut.