[An earlier version of this article featured an image of Sabrina Tajudin. We apologise for the misunderstanding caused, as we didn’t mean to imply that her products were listed as illicit products. We’re really really sorry for any inconvenience caused.]

So why is the pharmaceutics division getting all up in our faces? Some Chinese companies using fake ingredients again? Someone mix up the recipe for skin products with salmon skin products? Well, the truth is… probably worse. Erm, why are you smearing soy sauce on my face?? Image from punyfish.qstore.sg

The Malaysian cosmetic market is flooded by poisonous products

First, we have to understand that “cosmetics” don’t just mean all the colour colour things girls use for make up. It’s actually any substance we use apply to our body for cleaning, perfuming, changing their appearance, or for keeping them in good condition. That includes toiletries like shampoo and toothpaste, and even hair sprays. So guys, pay attention.

Cosmetics are a huge industry in Malaysia, with more than 60,000 cosmetic products available in the local market. Malaysians spent about 407 million USD (about RM1.2bil in 2013 exchange rates) in 2013 alone on cosmetics, with more than half of that value (around RM687mil) being spent on skin care products. The local “backyard” market itself is estimated to worth RM2bil!!! So Malaysians really like to save skin in more sense than one.

During the end of December last year, New Straits Times revealed a string of reports from their deep investigations of the local cosmetic scene, and found that a lot of these products contained high amounts of toxic substances, even some homegrown brands! Though it’s not clear how many products were sampled, and what percentage of them had poisonous chemicals, it’s more concerning that they discovered that NONE of the poisonous brands were banned by the Ministry of Health.

We’re talking about ingredients like mercury, lead, and hydroquinone, which the ministry had already banned completely because they can cause a range of serious health problems like kidney failure, brain damage, and cancer. To make things worse, exposure to these chemicals and heavy metals will only surface a few years from now, rather than in the short term. So you wouldn’t really know until then. Even a seemingly harmless “vitamin C” injection can cause sudden death. In 2016, HUKM alone reported 100 cases of sudden deaths of patients with no previous medical history. While it’s not clear if they are related to toxic cosmetics, the hospital will launch an investigation into it.

How did we end up with so many illicit products in the first place?

Back in 2008, Malaysia decided to introduce the “notification system” as a initiative as part of the ASEAN cosmetic directive. Under the system, you would have to go online and notify the ministry of your product before you begin to produce and market them. The leniency was hoped to promote growth of the industry, and it probably worked too well. We went to busybody on the website and found that all you have to do is register online and fill up a form, and the processing can be done in 1-3 days. There’s also a RM50 payment, then you can proceed to sell your product for up to 2 years. The problem arises because sellers are abusing the good faith the ministry is placing on them to be honest,coupled with lack of monitoring, as confessed by the deputy health minister himself.

“It’s true that on part of the ministry, we monitor them through our post-market surveillance, where we pick up samples and test them for harmful substances… we admit that the current system is rather loose and the need for a change is paramount.” – Datuk Seri Dr. Hilmi Yahaya in an interview with New Straits Time

That means the product is only tested by the ministry AFTER it has been marketed and IF it gets picked up for testing at all. Otherwise, it’s completely up to the manufacturers to conduct the testing and ensure the safety of their product, which the unethical businessmen are obviously ignoring. Even if their products were found to be faulty, the only have to recall their product within 72 hours, and there are no other legal implications. “You must demonstrate a sense of dignity…”. Image from pinterest.

Dubious products are also coming in from countries like China and Thailand, that have their fair share of cosmetic related problems to deal with, and they’re subjected to the same notification system because all they have to do is appoint a local distributor. And while we’re on the point of manufacturing,

You can create your own line of products from RM1000 So ez. Original image from pricezilla.in

If you’ve ever dreamed of having your face plastered on shampoo bottles or deodorants, you could actually make that come true RIGHT NOW. If you google “cosmetic manufacturing”, you will easily find more than a few companies offering to make cosmetic ideas come true. Their services will cover all your needs from start to finish, from testing the product, to manufacture, to design and packaging, and even shipment. You could legitimately be manufacturing your products starting from 1200 USD (RM5292 by current exchange rates). Screenshot of chart from intercosmeticasia.com.

If you’re tight on budget, worry not! According to New Straits Times, you can start with just 100 pieces of your product, for as low as RM1000 (shipping included)! The Malaysian based company NST contacted will even take care of the online notification process for you, for a small fee of RM2000 (if you upgrade to the 1000 piece package). When asked about putting harmful substances in the product, the company said it would just display approved ingredients on the packaging instead.

Cosmetic manufacturers are of course regulated by the Ministry of Health as well, but then again, the same problem as with the cosmetic sellers also applies to them.

Did you know beauty saloons can’t actually give you injections? They are only allowed to handle treatments on the surface of the body. Invasive procedures such as the injection of Botox, have to be handled by medical practitioners a.k.a doctors… which is why even doctors get roped in as well.

After paying for their beauty products, the NST team received a 3 page list of doctors they can contact for their “treatment”, along with their merchandise. The list consisted of doctors from gomen and private sectors alike, and charged anywhere between RM 75 and Rm 150 for their services.

Chatting with regular “patients” that frequents a particular clinic, NST found one of them have been getting her monthly dose from 2 different clinics for about A YEAR now. Generally, the patients had full trust of the doctors. They were confident that the doctors would warn them if the treatment pose any danger, and they felt safe because some of these doctors were selling the products as well.

Working with the Pharmaceutical Services Division enforcement team to raid these clinics, members of the NST team volunteered themselves to be jabbed with the “beauty products” to catch these doctors in the act. One doctor made no promise to discontinue the illegal practice, as he said “the money was too good”, while the other revealed out of spite, that he wasn’t the only one offering such services. 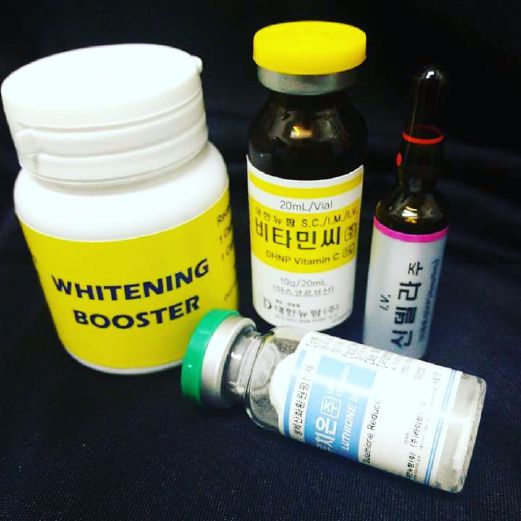 The products being brought to a clinic, with korean labels and everything. Photo from nst.com.my

Wait… so are the products I’m using safe?

The National Pharmaceutical Regulatory Agency (NPRA) keeps updated lists of approved and unregistered products on their website. The list of 162 products is complete with the specific ingredient within that is toxic, so you know what to tell your doctor if you’re feeling unwell. While the Ministry of Health has only proposed changes to their regulation of new cosmetic products, they will probably carry on raiding these illicit beauty saloons, clinics, and even online promoters. For instance, catching those relating their products to certain diseases, which is actually an offence under the The Medicines (Advertisement and Sale) Act 1956. Last year, 300 out of 304 cosmetic related websites and social media investigated by the Ministry were found to have violated some laws.

“They will also zero in on these sellers’ contact details and bank accounts. Banks and telcos will assist the team in securing these crucial details ,”- a source told New Straits Times

Meanwhile, since typical Malaysians aren’t equipped with labs to tests our own cosmetic products, the most we can do is to be aware. Despite being on the ban list, you can still purchase most of the listed products on the internet with some simple googling. Even a notable local cosmetic line had to pull a product off the shelves earlier this year because it contained mercury. So we’ll actually never know if that whitening cream that you’re using might be giving you cancer… until you read the news or some junk WhatsApp message with 50 emoji. That’s soooo reassuring. Meanwhile, if you want to report a specific product, you can do so here.