Alright Malaysia, let’s face it. It’s a difficult time right now with one thing dividing opinion between us like never before – Bohemian Rhapsody. We’ve got people saying it’s brilliant, some unhappy with the censorship and others lamenting the fact that the movie is, well, not actually factual.

That being said, if there’s one thing we can’t deny, it’s that the scene of the band Queen at the 1985 Live Aid concert was pretty darn good, and for some of us younger avocado-eating millennials, certainly makes us wish we were there in the moment. Incidentally tho, that Live Aid concert was in fact, partly the brainchild of a Malaysian businessman you’ve probably heard of but didn’t really know about – Ananda Krishnan.

The oil tycoon who got bored of oil

Tatparanandam Ananda Krishnan, better known simply as Ananda Krishnan, was born on the first of April, 1938 in Brickfields. He studied at Victoria Institution before making the move down under to study political science at the University of Melbourne, and later flying west to get an MBA from Harvard in 1964. Once he was back, he set up his very first company – a consultancy called MAI Holdings. However, it would be his next foray into the oil industry that would make him wealthy. 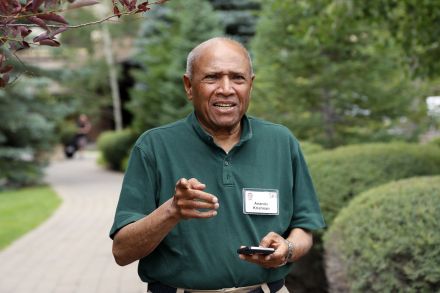 He would lead Excorp, an oil trading company that became huge in this region. Ananda would then also become a major player in setting up Petronas, apparently becoming a member of the company’s board of directors on top of having a seat on the board of Bank Negara Malaysia too from 1982 to 1987. He also ended up convincing Mahathir to build the Petronas Twin Towers too.

A life spent in boardrooms and office meetings can get a lil boring and dull tho, and Ananda would begin looking to try out different businesses. He wanted to broadcast sports and entertainment events to the world in the 80s, and judging by how he has a major stake in companies such as Astro and Maxis it’s probably fair to say he reached that goal today. However, his first real major shift into broadcast and entertainment was the 1985 mega concert, Live Aid.

The secret supporter of arguably the biggest charity event ever

Live Aid – for those of you who haven’t watched Bohemian Rhapsody and aren’t old enough to remember it – was a music-based charity event that was meant to raise funds for the Ethiopian famine that had killed over 400,000 Ethiopians.

Two concurrent concerts in the UK and the US with various independent concerts in other countries such as Canada, Australia and Japan were all linked up by satellite and television broadcasts, putting the live audience for it at approximately 1.9 billion people. Performers such as Queen, David Bowie, Dire Straits and Madonna all strutted their stuff to help generate funds for the Ethiopian crisis. The Live Aid concert would go on to raise a whopping £150 million for the famine victims. As a small gesture in return, the concert organisers placed an ad in the Wall Street Journal to thank the companies and people who gave significant amounts for the cause. Ananda Krishnan’s name tho was not there, despite him providing both the money and the idea for Live Aid in the first place.

NAH, BACA:
What were Malaysians searching for in 2017? We looked into Google trends for the answers

Remember how we said earlier that Ananda was looking to venture into broadcasting sports and events? Live Aid was his first major chance into that industry. He contacted Bob Geldof, a singer who was giving his profits from music to the famine relief effort at the time, and offered to help him fund a mega event to raise money. Geldof then responded with his idea of a super concert which would later be known as Live Aid.

“Instead of simply giving money to a charity, I wanted to invest it in someone who could raise large amounts of money,” – Ananda Krishnan, as quoted by Newsweek Ananda later provided USD 1.75 million to get Live Aid underway in the form of seed money and letter of credit. The concert itself was a huge success, both in terms of raising money for the Ethiopian famine as well as from a musical perspective, with the Queen performance in particular often voted as one of the best live performances ever. Who knew a Malaysian of all people would help kickstart it huh? Also, we couldn’t help but share this Briyani Wrapsody. Image from Nazrudin Rahman

These days, Ananda prefers to live a low profile life

Ananda Krishnan is quite known to be a shy person despite his billions, with some even calling him the ‘invisible dealmaker’. He doesn’t even have any executive positions in his four major companies, leaving his aides to be in charge. And perhaps in a somewhat fitting way, even his son Ajahn Siripanyo has seemingly given up material goods for a simpler life as a Buddhist monk. Ananda Krishnan and his son Ajahn Siripanyo. Image from Lowyat

Ananda is also perhaps well known as a man who often gives back. Maybe cos he himself got a uni scholarship to study in Australia when he was young, he now offers plenty of scholarships through three foundations as well as Astro and Maxis.

“Krishnan is contributing to the nation, building a pool of talented, skilled Malaysians, including ones who will be able to manage the new kinds of companies he has established,” – Josie Fernandez, founding director of Philanthropy Asia, as quoted by Forbes However, he’s still a businessman at heart whose job is to get profits. His charity might not be totally altruistic – it was claimed that Ananda believes that by lessening the suffering in this world, there’s a better climate for business, so it’s a win-win in some respects. He’s also had some legal trouble recently too, as a business deal between Maxis and India’s Aircel went sour, and following that the Indian govt has charged him for graft.

That being said, it’s perhaps fair to say that Ananda Krishnan remains a pretty important figure for Malaysians, especially those who benefited from his philanthropy. Now if only this writer can get him to help pay back that pesky PTPTN loan….