During your last trip to the bookstore, you may have realised certain stands dedicated to a particular comic like this.

Some of you may have even bought these comics and enjoyed them yourselves! Imagine back in the day we used to enjoy comics like Superman/Batman/Archie, or anime like Dragon Ball. We could even name some really Malaysian English comics like Lat or Kee’s World (in The Star newspaper wan), but after the glory days of these comics it seems as though the local English comic scene went underground for awhile. Many of you may have seen this Malaysian comic. Image from J&Y Productions official FB page.

But it seems that a new age is dawning upon us. The past few years have seen quite a number of local English comics make a name for themselves. The picture at the start of the article shows 2 local books on sale, “When I was a kid” and “Bro, don’t like that la bro”. Aside from that, there’s also popular web-based comics such as “J&Y Productions“, “Like That Also Can, Ah?“, and even “Miao&Wafupafu“.

Recently we even had the opportunity to speak to both Cheeming Boey, author of “I am Boey”  and Ernest Ng, author of “Bro, don’t like that la bro”., plus Ernest’s publisher, Daniel Khong of Keropok Comics! Ernest even demonstrated his love for us in a drawing!

And they believe there really is a resurgence in our local English comic scene.

So at one point in time our local English comic scene died or what?

Well, none of them actually said that it died la. But they do agree that there has been a surge in popularity for local English comics.

“In the past few years we have seen a resurgence in English comics that has coincided with the popularity of web comics.” – Daniel Khong

He said that the internet has made it easier for comic artists to get their work out. This is because the comic artists can now just upload their comic strips on Facebook or Instagram. Case in point being Boey and Ernest who both started out as webcomic artists before making the transition to actual comic books. Ernest’s first comic on his blog in 2010. Click for blog.

Daniel also said that during the dark ages of local English comics, it was never the case that Malaysians had lost interest in them, but a problem on the side of the artists.

“Not enough people took risks. There wasn’t a lack of artists, but a lack of opportunity.” – Daniel Khong

But Boey also adds that a reason why local English comics didn’t do so well for a time because comics in general didn’t have a very good rep among parents. Like we could very easily name a lot of fighting and action comics, but very few comics that actually were about life.

“When kids read these comics they start fighting each other using all these moves, the parents are going to be like what are they doing??? Then they think they (comics) are a bad influence.

It’s engrained in a whole generation of kids that comics are bad.” – Cheeming Boey But the thing is, both Ernest’s and Boey’s comics are about life! In fact, Ernest and Daniel pointed out that the local English comic scene right now is all about life stories! Doesn’t this contradict what the 3 of them just said?

Local English comics not so flashy also, so why do people like them?

Especially when local English comics have never been as flashy and action-packed as most people would probably imagine comics to be. In fact, they’re not just not flashy, but from Lat to Boey, their work is simple hand drawn comics. So what makes them sell?

“The content and the brand of humour is something only Malaysians can understand. It’s very contextual.” – Daniel Khong

Daniel explains that there’s always been a huge demand for the kind of content local English comics provide. Ernest explains further that only these comics can provide the mix that only our culture can understand.

“We like all kinds of languages, so English is just part and parcel of our culture. For English, we have that Malaysian yet westernised feel, something that’s very unique.” – Ernest Ng In fact Ernest said that an early challenge for him was getting people to understand his toilet humour, but it eventually worked out, because many of us do enjoy toilet humour (to varying levels)!

NAH, BACA:
We "know" that food naik harga during Raya... except it DOESN'T. Here's the data.

But Boey also adds that people started to realise that comics really weren’t the worst thing out there in the world. In fact, it could even be due to people believing they could not longer save the world….

“I think people now gravitate towards everyday heroes over superheroes. Something they can identify with. Because people no longer think they can save the world. The population of the world has grown too big and people are like “I can’t change anything”. But as an everyday hero, people can still make changes in their everyday surroundings. It seems more possible.” – Cheeming Boey

So basically, we love them because it’s relevant to us!

Even if the comics are relevant, can a comic artist make a living in Malaysia?

And his answer was yes, you can make money, IF you know what you are doing, and you can market yourself well. Ernest has sold over 65,000 copies of his book across Malaysia. As for Boey, well, he declined to provide figures but he tells us that his books have been on the best sellers’ list for years. Well according to Ernest and Boey, the answer to making money with comics is to….not think of making money……??

In the context of our conversation, Boey wasn’t even focusing on the money. He was actually saying that money should never be a motivation for a comic artist. And he points out that there’s nothing wrong with doing other jobs while you do what you love

“Maybe you need to be doing the same thing where you’re working for someone and taking time to do what you love as well. And when you realise that thing you love is able to support you, go for that.” – Cheeming Boey But that’s on the side of the artist. Ernest on the other hand, told us that often times, drawing is an art form that people don’t really respect, and if the audience appreciates it and enjoys it, they should show their support.

A lot of artists give up because they don’t get the recognition they are looking for. Although I’m trying to say don’t draw for recognition, in some ways, artists need to have that motivation when people share their work. It helps a lot. Because most artists I know, aren’t in it for the money. They do it because they love it. So click that share button!!! (on the comics, and also CILISOS‘ articles yea :P) – Ernest

Forget money, what if the comic resurgence is just a fad?

Ernest and Daniel both mentioned that the pioneer of the resurgence of these comic books was actually Boey’s first edition of “When I was a kid”. Daniel explains that Boey’s first book was what made him believe that local English comics could actually sell once again in Malaysia. 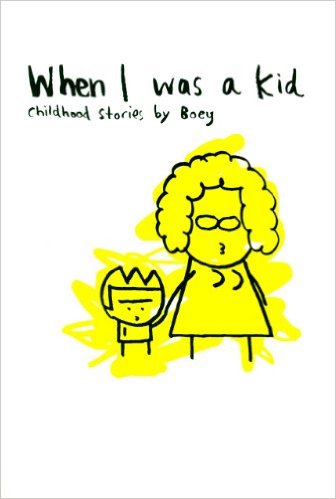 Ernest and Daniel also both agree that for the moment at least, most, if not all local English comics are of the slice of life genre. But that is something that Boey feels has to change if the local English comic scene is to progress.

According to him, none of his books have since surpassed the success of the first book, and doesn’t feel that any of his future books could either. He said this because his newer books lacked the element of surprise.

“After I wrote the first book, I thought I would have the same feeling writing the second, no man it’s gone! The reason you’re (referring to himself) writing a second one is because you now know that the first one worked! So anyone else that writes the same style coming in now, people have already seen something like this before. It’s not going to be as interesting.” – Cheeming Boey So it seems that the local English comic industry may really be having a resurgence, but whether or not it will continue to develop may depend on the artists themselves to innovate in the future. But that really shouldn’t stop any aspiring comic artist out there from entering the industry if they really believe that their work is good. In fact, Boey says that the thing about comics is that it isn’t actually about how well you can draw!

“Comic books aren’t about drawing, but about story-telling!” – Cheeming Boey

He also adds that the most important thing in the comic industry is to stay relevant. And if our comic artists can continue to do that, coupled with the ability to tell good stories, there’s no reason why our comic industry cannot go far in the future.

Related Items:bro don't like that la bro, cheeming boey, comic, ernest ng, keropok comics, when i was a kid