Earlier this month, Brazilians were rocked out of their sleep (or at least their former president was) when news of a huge corruption scandal involving a state-owned company, Petrobras and corrupt government officials including the ex-President and current President was leaked.

The police launched a huge investigation, named ‘Operation Car Wash’ to uncover and clean up the dirt in the car….err…I mean government.

Not this kinda car wash Since this leak went public, Brazil has experienced a huge uproar, with the economy slumping, citizens protesting, the government in denial, and becoming the laughing joke of the world. But hey, it’s Brazil – that’s their issue la right? We’ve got our own 1MDB to worry about now, so why are writing this for?

Well, it’s important because right now, observing Brazil, we realise that there are certain things we can learn from our Brazilian friends who are in the same boat (the sinking one) as us, lessons that may be extremely important (in case we ever decide to launch ‘Operasi Cuci Kereta’). But surprisingly… here are 3 very key differences in how our two countries have dealt with these massive scandals.

1. Their President isn’t part of the team set up to investigate….the President. 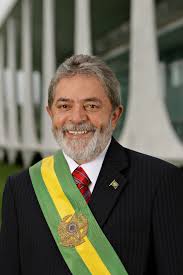 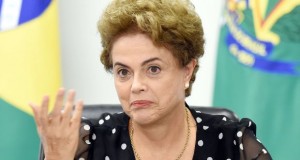 Before we go into the nitty-gritty, there are some simple terms we need to understand about how a government is supposed to work. See, most governments are formed out of three different ‘arms’, which, when put together, forms the government…kinda like how the Power Rangers form Zord, or for those non-geeks out there, how sugar, creamer, and coffee combine to form your 3-in-1 drink. So the three arms of a government are:

Now, normally, these three arms are supposed to be independent of each other, which means they cannot control or influence each other. So the people who make the laws ≠ people who interpret the law ≠ people who carry out the law. This is to make sure that there is no one party that can monopolize and take full control. This is known in legal-speak as separation of powers.

The investigation in Brazil taking place now is led by a Federal Judge named Sérgio Moro, who has been giving the authority to the Brazilian prosecutors and police to investigate, arrest, and charge all parties responsible like there ain’t no to-Moro (pun completely intended). 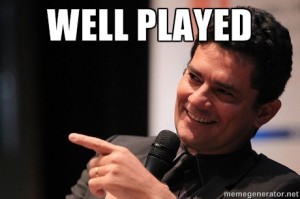 Judge Sérgio Moro, and what he would say to that pun. Probably. Unedited image from www.mises.org.br

In response, the Brazilian economy, currency, and stock markets rose after the detention of ex-President Lula as investors’ confidence returned.

Unlike Brazil, in Malaysia, the separation of powers isn’t so clear cut, and our Executive arm (Prime Minister) has quite a big influence on the investigative efforts granted by the Judiciary (our Attorney General) and our Police. As reported last year: 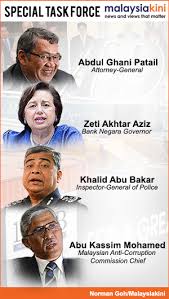 Two were removed, one helped to remove, and one more is about to retire. Guess who? Image taken from malaysiakini.com

As a result, the investigations into the 1MDB scandal in Malaysia is still largely unresolved, with several countries having to step in to investigate, and we are no closer to any conclusive answers about the issue. Wow. Who knew how important it is to set up a government with separation of powers huh?

2. Their media isn’t getting shut down.

Another lesson Malaysians can learn from Brazil’s own 1MDB-like saga is the importance of a free media. 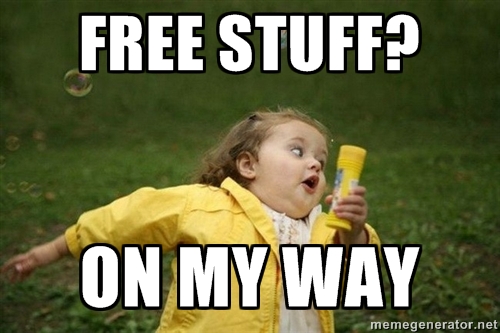 About half of you, when you saw the word “Free”

No. Not that kind of free. A free media is simply one that is allowed to report without worrying about their security, as long as they are reporting the truth. The media has been touted as the “fourth estate”, which, in simple English, simply means that the media is the “unofficial fourth arm” of good governance (refer to the three arms above), allowing us rakyat to make sure the gomen no hanky-panky by reporting it in the news so that we can hold them accountable. To put it in a slightly more inspiring way:

“Our liberty depends on the freedom of the press, and that cannot be limited without being lost.” – Thomas Jefferson, former (like waaaayyyy former) President of the United States:President of the USA

In this case, our Brazilian friends do it better than us. Ever since the scandal leaked in Brazil, the media has been a constant source of information, with two of Brazil’s largest newspapers (warning: in Portuguese) providing up-to-date information on the entire case. This has led to raised public awareness throughout the nation of Brazil, and increased pressure on the President to step down and be accountable for the scandal. As mentioned earlier, Malaysia’s press freedom is….not too good. Ever since the 1MDB scandal broke, several alternative medias who have reported on the issue have found themselves in trouble, including but not limited to:

NAH, BACA:
Artist arrested at Publika on Sat. Guess what he does on Sun?

Other news portals have been warned to be careful, or risk suffering the same fate.

Why is the media important? Because it is through the media that the public knows what the government is up to, and if the government can control the media, there will be no one left to hold the government accountable for all of their actions, because NOBODY.WOULD.KNOW. This can lead to ignorance, fear-mongering, and rumours being spread far and wide, causing unrest and panic among the population. Ironically, by banning media outlets for fear that they will cause panic, more panic is actually caused. What can we do? Well, for starters, we can begin by supporting our alternative media sources by subscribing to them or increasing their traffic (sharing articles, clicking ads, etc.) so that they have enough revenue to carry on.

We can also make it a point to join in solidarity when we see one of our media portals being bullied or pressured without good reason, and through that remind ourselves that media freedom is important and worth protecting at all costs, or we will only end up with more of this in the future: 3. They also kinda let their citizens complain  (until a certain point la)

Okay, to be fair, in this case, Malaysia and Brazil both have something to learn from each other. As news broke out all over Brazil (thanks largely in part to the media freedom in #2), Brazilians reacted in much the same way Malaysians do: by taking to twitter and online platforms to voice their displeasure, and also to the streets in protest against the government and the scandals. Brazilians from all 26 states took to the streets in a peaceful protest, with crowds peaking at 1.4 million!

In comparison, Bersih 4 only numbered anywhere from 50,000 (police estimates) to 100,000 (social media research Politweet), and only happened mostly in Kuala Lumpur. In fact, Cilisos even ran an article a while back trying to guess-timate the amount of people at Bersih 4 at it’s peak period, and came up to 67,564 people, which you can check out by clicking that link above (yes, this is another instance of self-advertising). 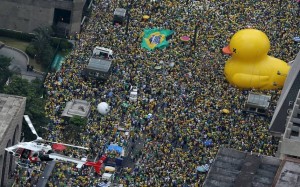 What thousands of Brazilians and a giant duck look like. Image taken from telegraph.co.uk 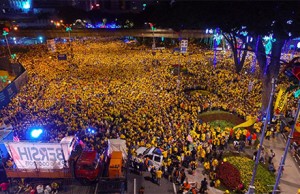 What thousands of Malaysians in yellow-duck coloured shirts look like. Image taken from asiapacific.anu.edu.au

Where Brazil can learn from us (proud Malaysia Boleh moment) is that there were reports of Brazilian police resorting to violence to disperse the protesters, whereas in Malaysia’s Bersih 4, the police were actually peaceful and maintained order quite well (credit where credit is due la huh..they had good practice from the previous Bersih rallies and learnt their lesson well). In fact, there was even a really heart-warming video where Malaysian protesters in Bersih 4 sang their thanks to the police for their efforts in keeping the peace throughout the rally (yay Polis Diraja Malaysia!).

While our street protests were more peaceful than Brazil’s, our online protests were most definitely not. In fact, we made news when our very own PDRM launched a Twitter account to investigate tweets, and Malaysians were warned against making immature comments on social media. One of our ministers even made a statement that freedom of speech is a privilege, and not a right…… despite our very own Constitution guaranteeing it as a right. Errr…awkward… 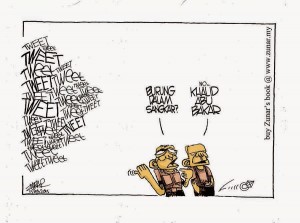 Why is this a problem? Well, Malaysians are the most active users of social media in the world. Logically, if you want to reach out to a Malaysian public, you should be encouraging discussions and allowing them to air their views, so you can engage with them. Threatening Malaysians online will only lead to a lot of pent-up anger, and some Malaysians will release that anger in very….creative ways.

The allowing of the public to air their views freely is important in ensuring that the voice and concerns of the people are heard, and lets the government work hand-in-hand with the people to solve their issues together, rather than just looking like they’re acting against the people. So, to our beloved Abang Polis, #ChillOutYo. #KitaSemuaKawan

Brazil and Malaysia has similar issues to deal with, but the way we (are allowed to) approach it is really quite different, resulting in very different outcomes. Brazil’s handling of the case has led to much more clarity about what has happened, and allowed the investigators to get to the bottom of the mystery, where close to a 179 people have been charged, and about 93 people have been convicted. The President herself is also about to be impeached (charged), and Brazil’s government and related institutions have become stronger from this lesson.

Meanwhile in Malaysia, the mystery only gets deeper and deeper, with more and more scandals being uncovered as time goes by, our country experiencing an unstable economic future and Malaysians being no closer to the truth. Still, maybe this article can remind all of us that it need not be this way. We can make a difference. Maybe if enough of us recognize the importance of what Brazil is doing (ensuring separation of powers, a free media, and freedom of speech), and act on it in any way we can such as campaigning with movements to demand separation of powers, supporting our alternative news websites, and claiming our rights to free speech and peaceful dissent (or at least demand that this be guaranteed by the government we vote in next) we can begin to effect what change we can right now, in order to guarantee a better future for all of us.

And that is certainly worth putting our fears and worries aside, along with all of the things that seem to drive us apart, and work towards it together, don’t you think? 🙂