It’s not new information that tigers are being poached to extinction in Malaysia. This country has long been used as a transit point for wildlife smuggling to other countries. And ironically tigers are our national symbol -__-  So much for being a.. Malayan tiger is the national animal of Malaysia

Did you know that there are only 3,890 tigers left in the wild based on IUCN estimates and national surveys? That is a yuuuge freefall from the population of 100,000 at the start of the year 1900!! 🙁  What happened?? Omg if there are no more tigers left, does that mean our Malaysia national emblem have to change animal?

All brands with tigers would also have to change logos 🙁

Our friends at Tiger Beer are naturally super worried about the plight of tigers coz, duhh, it’s the animal which represents the beer brand. Imagine if tigers really go extinct, what animal will some of Malaysia’s most famous brands change their symbols to? It would be half as cool as a tiger!

So Tiger Beer is collaborating with WWF on their global 3890Tigers Campaign, happening from 29 June-29 July. They’re bringing together six artists from six countries to uncage their creativity and create unique pieces of artwork. On the campaign website, there’s a tool which allows you turn your selfies into these cool tiger-inspired artwork. Upload your selfie to your own social media platform to unite with others worldwide on the stand against the illegal tiger trade.

This campaign aims to inspire people worldwide to send out a distinct yet universal message against illegal tiger trade by turning their selfies into art.

Then upload it on your social media platform

They are also donating USD1 mil (RM4.3 mil) to WWF train rangers to protect and manage national parks and areas where tiger populations are found, raise awareness and stop the illegal tiger trade, as well as other wildlife conservation efforts.

There are many reasons for their dwindling numbers, some more ridiculous than others, but it all goes back to the same answer… human beeens. But even the World Federation of Chinese Medicine Societies (WFCMS) have spoken up against the use of tiger products because the claimed medicinal benefits have NO BASIS!!

So here are 8 WTF reasons why Malaysians and other people around the world kill tigers.

*Warning: Some images may be graphic.

1. Tiger whiskers are fed to an enemy to kill him In Malaysia, people believe adding tiger whiskers to the food of their enemies will kill them. We learned from forums that some people think when the whiskers of a tiger are ground up and fed to a person, the results are the same as if he’d swallowed ground glass. This can probably be traced back to stories of 17th century China. It’s horrible to think that almost 400 years later, people still buy into this myth.

Peter Fleming, brother of famous James Bond author Ian Fleming, recruited an Indian spy codenamed Silver during WW2. Silver was almost exposed by an Afghan man but saved himself by serving the man a curry mixed with tiger’s whiskers – the last meal the Afghan ever ate. Of course, the whole thing was probably a story.

But the use for tiger whisker vary from country to country. In India, a guard working in a wildlife sanctuary poisoned a six-year-old Bengal tigress to death (oh the irony) for her whiskers coz he believed they would enhance his sexual prowess, The Sun Daily reported. Similarly, Indonesians believe tiger whiskers to be an aphrodisiac too. However, others in India as well as Pakistan use whiskers as an aid to childbirth.

2. Tiger brain is a cure for laziness and acne Most of us would have heard old Chinese people saying using or eating tiger parts can cure ailments or boost one’s health in general. But have you heard that some people believe mixing tiger brains with oil and rubbing that mixture on your body can cure laziness…and acne?!

Well, acne we understand since it’s a skin disease – even though there is NO medical or scientific proof of the efficacy of tiger medicines – but laziness, really?? Tiger blood also is supposed to boost a person’s willpower. How about just drink a strong cup of coffee? Or try these tips to overcome laziness instead. As for the acne, there are plenty of ways to tackle it that doesn’t involve killing tigers, from lifestyle changes, to retinoids and creams with benzoyl peroxide. This photo was taken at a Russian restaurant that served tiger meat. Image from Daily Mail

Kahang town in Johor is one such place known for its exotic food restaurants, including tiger meat. Regular customer Danny Chin explained that tiger meat is said to help people, ahem, perform in the bedroom, and was served either fried with curry powder or cooked with herbs.

“The price for a plate of tiger meat fried with curry power is about RM40.” – Danny Chin, customer of restaurants in Kahang, The Star Tiger penis for sale in China. Image from Daily Mail

Tiger penis too is said to act as a powerful love potion or aphrodisiac. Customers could buy a Malayan tiger’s penis with testicles for RM10,000-RM15,000. We discovered a penis restaurant chain in China!

“In terms of nourishing the yang, tiger penis is definitely top. If you handle tiger penis properly, and mix together with Chinese herbs, it really has the best possible effect – much better than Viagra.” – Zhang Yang, restaurant manager, Time

NAH, BACA:
Like your ex, this new JPJ system will now remember every kesalahan you make

4. Tiger claws and paws protects children from the evil eye

This tiger paw belongs to an anonymous friend of CILISOS. The things that look like entrails are actually tendons

Some of us would know about tiger uses in Traditional Chinese Medicine (TCM), but did you know that Asian countries, many still ruled by superstitions and myths, claim poor tigers as victims, because these big cats are believed to have mystical powers?

Even in modern times, parents in India would buy tiger claws and fix it to the necklaces of children to protect them from the evil eye as images of child deities are shown with a tiger claws attached to their necklaces.

In Malaysia, a Malayan tiger claw can fetch between RM500-RM1,000. Over here, claws and paws are considered sacred, also used for protection from the supernatural, according to a friend of CILISOS who would prefer to stay anonymous:

“My dad says, ‘Don’t ask me la, I’m not that old… It’s to keep the house safe from evil spirits’.” – our anonymous friend Another weird reason people kill tigers for is to obtain their hairs. Apparently burnt tiger hairs can drive away centipedes (no sources state it can drive away in-laws tho). We have no idea where this came from, and why, and how, and just what the heck are people thinking, coming up with this story – information is scarce, however many sources have pointed out this belief on the subject of tiger killing. So maybe it exists, but it’s not very popular?

Aiyo, how about using insecticide and keeping your home clean and dry instead. Use these real tips to keep centipedes away.

6. Tiger’s skin is used to cure a fever caused by ghosts Officials seized tiger skins in Kedah, near the Malaysia-Thai border. Image from dawn.com

The Indonesians believe tiger skin has magical powers. Not the kind of skins you’d use on Friendster. It is used to cure fever caused by ghosts. The sick person must sit on the tiger’s skin, but not too long! If someone sits on it for too long, legend says the user will turn into a tiger himself. 😆

Typically, small pieces of tiger skin are used to protect the owner from black magic in Indonesia. These pieces are also used shamans to cast spells on others. Additionally, the skin can be turned into a belt with a magical code to protect the wearer from all dangers posed by wild animals or evil spirits. Some locals say that the skin will have no power if it is blocked by a human shadow before the trapped tiger is killed.

Whole tiger skins could go for RM15,000, and with the head, it could cost RM35,000. By far, the most expensive part of the tiger we’ve come across for this list.

7. Tiger eyeball pills are a remedy for convulsions For illustration purposes only. Image from Uni of Michigan Pinterest

Rolling tiger eyeballs into pills is an alleged remedy for convulsions and malaria, more specifically epilepsy. This is what TCM doctors in China will recommend for those who have that condition. In fact, in India, parents might tie the small bones in a tiger’s feet tied to a child’s wrists also as a cure for convulsions, while others would use tiger bile. If you were to buy a pair of eyes in Taiwan, you might have to pay $170 (approx RM700).

8. Tiger bones are preserved in wine as a health tonic 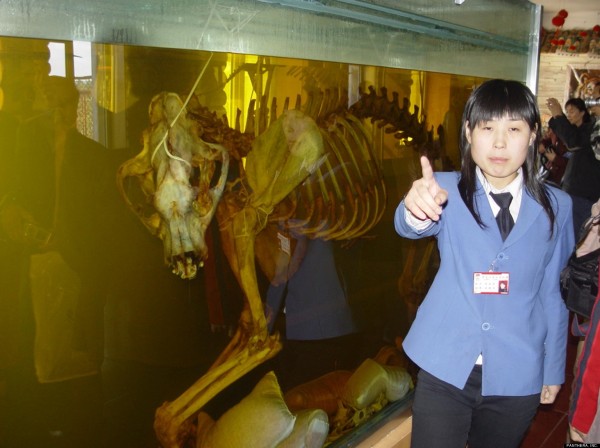 A tiger skeleton soaks in rice wine in Harbin, China. Image from nationalgeographic.com

Out of the 8 points in this article, tiger bone wine is perhaps one of the most popular and widely known of the TCMs, aside from tiger meat and penis. Farms in China sometimes starve tigers to death, then steep their bones in rice wine for up to eight years. Drinking it is believed to boost one’s sex life or even acts as a general tonic, as taken by the Taiwanese.

In other cultures, tiger bones if ground into powder and taken with a glass of warm water is a treatment for rheumatism and headaches. Ground bones could cost up to RM800-RM1,500 per kg in Malaysia.

Recently, the World Federation of Chinese Medicine Societies (WFCMS) urged people to stop drinking tiger bones because the claimed medicinal benefits have no basis. Hopefully, this will make some people realise that there is no use wasting money on these things.

Three tiger species are extinct already. What happens when others die out too? Of the original 11 tiger subspecies, Bali, Caspian and Javan tigers have become extinct thanks to hunting-mad people. Now the world is left with Bengal, Indochinese, Siberian, South China, Sumatran and our very own Malayan tigers. So the remaining six subspecies are classified as Endangered.

How did this magnificent animal, the largest of the big cat species and an apex predator, dwindle so cat-astrophically in numbers? 🙁

For an animal that is so iconic in Malaysia, it’s sad that they are dying out because of ridiculous beliefs and human greed. So if you want, you can show your support on the 3890Tigers Campaign.