Just last week, some 200 to 500 estate workers staged a protest at the Parliament. The estate workers were members of a coalition of NGOs called the Estate Society Support Community (Jawatankuasa Sokongan Masyarakat Ladang). They were demanding the govt to enact an estate housing law to guarantee estate workers permanent housing even after their contract ends (more on this later). This comes after many estate workers found themselves homeless after a certain age, as apparently they would have to leave their houses once they retire.

But that wasn’t always the case for them.

There was once a national housing scheme for estate workers…

And this was all thanks to… Najib’s father, Tun Abdul Razak. Now the fight for estate workers to have their own homes has been going on for over 30 years(!). And according to the Estate Society Support Community’s national coordinator, Karthiges Rajamanickam:

“We started (fighting for house ownership) in 1973. It has been made a policy but until now, it has not been made law.” – Excerpt from FMT.

And indeed it was during the 70s that the then-Prime Minister, Tun Abdul Razak introduced a housing scheme called the Estate Workers Revolving Fund for House Ownership that helped estate and mine workers to own a house. Under this scheme, employers aka plantation owners are responsible to allocate some land to build home, particularly terrace houses, for the estate workers. According to Parti Sosialis Malaysia (PSM), the payment for the houses would be deducted from the workers’ monthly salaries. We couldn’t find any images of the homes from the Tun Abdul Razak scheme so here’s a house that is apparently provided by the Human Resource Ministry. Img from mohr.gov.my

Although this scheme was successfully implemented in about 33 estates (some reports claimed it was only 17 estates) out of 1,000 plantation estates in Peninsula Malaysia at that time, it was said to be a failure. This is because it wasn’t turned into a govt policy nor was it enforced properly a few years later.

So what happened to the estate workers after that? Apparently, the Selangor State Executive Council came up with a new policy in 1991 which required estate owners to implement estate housing ownership for their workers.

Buttttt this didn’t work out as well since it was not mandatory for estate owners anyway. And because it was voluntary based, it was said that most estate owners didn’t observe this policy. No wonder estate workers are angry… Img from FMT

There were a few other initiatives that were supposed to be implemented, according to PSM, like…

There is actually a law that provides estate workers houses… kinda

As it turns out, under the Workers’ Minimum Standards of Housing and Amenities Act, employers in the plantation and mining sector are required to provide housing facilities to their workers. This includes things like nurseries too.

Normally, these houses are centralised like a small kampung – which may be why there would be facilities like nurseries and schools. And just recently, the Human Resource Ministry had amended the act to include other sectors like construction and manufacturing. But Kulasegaran also reportedly said that the new amendment won’t be focusing on making it mandatory for employers to provide housing facilities for their workers.

“On the provision of centralised accommodation, this is among the accommodation options, other than any type of building for the purposes of human habitation available to the employers to accommodate their employees.” – Kulasegaran told The Star.

This would mean that employers may or may not be providing workers to own a house since it’s not compulsory for them to do so.

But fret not. The govt is actually doing something about this. Apparently, the Human Resource Ministry has come up with a scheme that may help estate workers to own a house under the Skim Khas Pembiayaan Rumah Pekerja Estet (SKRE).

The govt would be financially helping estate workers to own a house. We stumbled upon what seem like a pamphlet by the ministry which explained a lot of things regarding the scheme like the process of applying for the scheme and a breakdown of the payment. Click screenshot from mohr.gov.my to see the full pamphlet.

And one of the things that stood out from the pamphlet was how this scheme is only applicable to confirmed estate workers. This would mean that contract or retired estate workers are not eligible for this scheme. In other words, they won’t be able to afford to buy a house.

But this scheme is different from the cases where estate workers were evicted from their own homes. 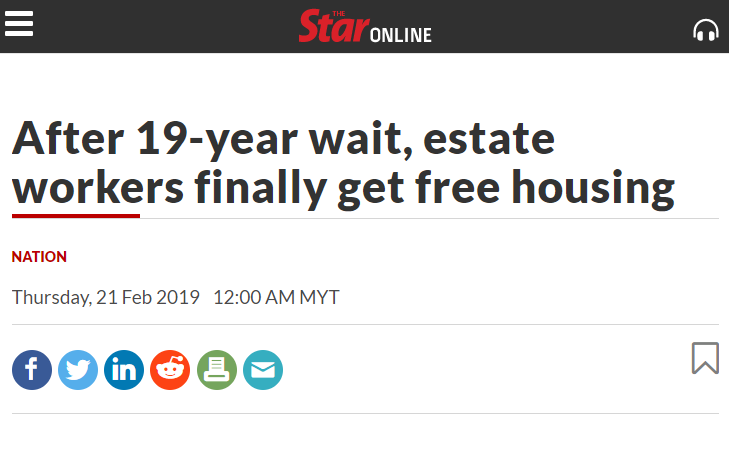 Wah, free houses some more. Screenshot from The Star

At times, estate workers were evicted from their original settlement as the estate plantation has been turned into other plantations or towns. We’ve written a story like this and you can read it here.

And these cases oftentimes point to a trend: the companies, oftentimes govt-linked companies (GLCs), are the ones responsible to provide these estate workers with a new home. Having said that…

For some, it may make sense as to why the estate workers had gathered to stage a protest at the Parliament the other day. Besides urging the govt to enact an estate housing law, they had also demanded the govt to raise the minimum wage to RM1,800.

At the time of writing, the Human Resource Minister, M Kulasegaran has apparently replied, saying that the govt may partner with GLCs and the private sector to provide houses to estate workers. It was reported that Sime Darby agreed to provide 10 acres of land in Sungai Siput, Perak to build houses for estate workers.

“The ministry has handed the land over to the state government for it to be divided into sub-lots.” – Kulasegaran to FMT.

In addition to the 10 acres of land provided by Sime Darby, the govt is looking at providing 40 acres of land in Pulau Kamiri, Perak to build houses for estate workers. While this sounds like good news, the govt was like… 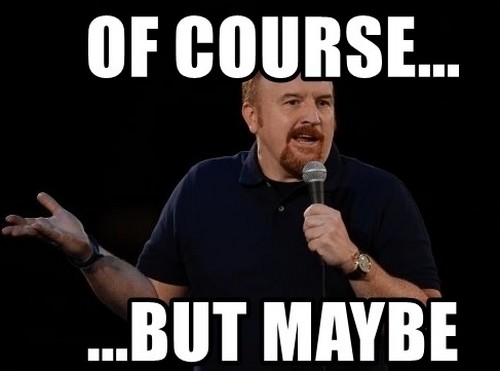 Besides providing land to build houses, Kulasegaran also added that the govt may be providing estate workers some RM30 million in loans to purchase homes. Similar to the SKRE scheme we mentioned earlier, this loan would be handled by the Bank Simpanan Nasional and the govt would give discounted rates with interest set at 2%.

While all this sounds pretty good, let’s just hope that the govt would actually help the estate workers because, at the end of the day, all they wanted is to be treated as a community.

“We are asking the government not to treat estate workers as if it’s an employer-employee thing, but to treat them as a community.” – PSM’s S Arutchelvan told FMT.

Share this article:
NAH, BACA:
Malaysia just became the world's 4th best hockey team - and a lot of them have day jobs!