Did you know in July this year, Malaysia’s human-trafficking ratings dah naik?

If you are cynical about it like some people are.. you should know that it’s the US government that upgraded our status through the Trafficking in Persons (TIP) Report. It’s like an annual report card that evaluates foreign gomens on their “perceived efforts on tackling human trafficking”. Or in other words, looking at what they claim they did.

Before the upgrade, Malaysia was listed as a “Tier 3” (blacklisted in the report card) human trafficking violator – putting us next to Syria, North Korea, and Russia, countries that are notoriously femes for forced labour and cray cray dictatorship. But this year, we got bumped up to Tier 2!

OMG AWESOME! What did we do to improve? 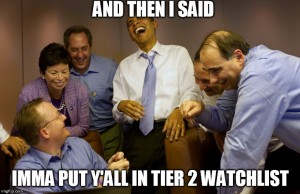 So now we’re joining some of the cooler kids in the Tier 2 watchlist playground like Cuba, Sri Lanka, and China. To qualify for it, the country’s human trafficking situation is technically still at Tier 3 teruk (may not be at minimum standards yet), but is making significant efforts to meet those standards (hence, “perceived efforts”). In our case, the gomen made recent amendments to the Anti-Trafficking in Persons and Anti-Smuggling of Migrants Act (Atipsom) 2007, but that has yet to come into force. In what should be positive news for our country, critics and human rights groups have spoken out against it saying that there’s still a lot more to do for human rights in Malaysia.. Especially when mass graves were found near the Malaysia-Thai border at 28 suspected human trafficking camps! Some believe it to be the Rohingya Muslim refugees that were fleeing Myanmar. 🙁

But what happened next is even worse…

Ironically, just a few months after the upgrade, Malaysia’s one and only national human rights body SUHAKAM’s budget went down south with a budget cut of nearly 50 PERCENT, from close to RM11m to RM5.5m.

Other NGOs and SUHAKAM themselves came up and told the gomen to review the budget cut so that the commission can run effectively because SUHAKAM is super duper important as Malaysia’s human rights taiko.

Wait. Who da heck is SUHAKAM?? It’s one of those names that we read here and there but don’t really know what it is…. kinda like the word ‘bespoke’. Woops, turns out IT IS the past tense of ‘bespeak’. 😳

First thing’s first, we must clarify that SUHAKAM is not an NGO (don’t feel paiseh, cause you’re probably not the only person who thinks so). SUHAKAM stands for Suruhanjaya Hak Asasi Manusia, or Human Rights Commission, and is an independent statutory body established by Parliament. Statutory bodies in Malaysia are like companies under the gomen that are created to achieve certain responsibilities and duties. 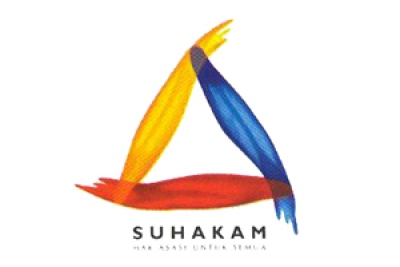 The institution functions to:

With that function, they are given kuasa to:

So.. would you believe us if we were to tell you that SUHAKAM got a bit tak syiok with the gomen because they WEREN’T CONSULTED on scary-azz laws like POTA, Sedition Act, SOSMA dan semua yang sewaktu dengannya!

So what does SUHAKAM actually do then? Here are some of the things they’ve done recently, starting with the image above

We mentioned above that one of SUHAKAM’s roles is to advise the gomen matters relating to human rights, and it is their legal responsibility to do so. When the gomen was drafting out laws for anti-trafficking and persons-with-disabilities, SUHAKAM was consulted and most of its recommendations were accepted BUT…

When it comes to laws and amendments that have direct impact on human rights such as the recent POTA, Sedition Act, Prevention of Crime and SOSMA, SUHAKAM was not consulted before the passing of these laws! Walauuu, the gomen bypassing the agency on such important matters is like marrying a trophy wife and that’s about it – she’s just there for show only.

NAH, BACA:
These 5 ex-BN leaders started their own parties. Where are they now?

But SUHAKAM is not just going to sit there and be pretty. The chairman expressed regret over the decision and said the gomen were morally and legally bound to consult the agency before any amendments or passing of such laws, especially since the alarming number of Sedition Act arrests and charges.

“They (gomen) said they had consulted us, but it is not true. … They just briefed us,” – Tan Sri Hasmy Agam as quoted in The Star.

WAH if like that then why gomen even bother keeping SUHAKAM around? The presense of a watchdog agency like SUHAKAM is to make it seem that MALAYSIA actually cares about human rights. Kinda like marrying a pretty girl so you can show her off to your friends. For the past 15 years since it started, the watchdog agency has been fighting for more authority, and to have its annual report debated in Parliament. Hasmy even said that our parliamentarians have not been disciplined enough to engage in discussions on human rights issues.

But they’ve not always been tak ngam with the gomen lahh.. SUHAKAM has successfully collaborated in starting a human rights education programme in 2009, and now with over 144 participating schools throughout Malaysia as of May this year, so they have definitely done some good.

But then when Putrajaya decides to slash SUHAKAM’s budget by nearly 50 percent, what does this mean for the nation’s biggest, arguably most important human rights watchdog agency?

So how bad is SUHAKAM’s budget cut? Having a budget cut is not surprising in the economy, especially with falling oil prices and to reduce the gomen’s overspending like boom boom pow. But can you imagine if your sole income got halved!?

With the current budget, they can only cover fixed expenses, and not even taking into account the programmes they run. We contacted SUHAKAM and they told us that the Commission currently has 85 officers and staff members, and the seven Commission Members. Let’s breakdown their fixed expenses to see if they really can make it with the budget slash.  ASSUMING the officers each receive an average of RM3000/month and the top guys receive roughly RM7, 000/month (pretty safe estimates no?)

With offices not just in KL, Sabah and Sarawak plus bil telefon la, bil Internet, sewa ofis (okay, one unit of 20, 000 sq. ft. is RM91k per month, it looks like they might have to move their main branch to Port Dickson or something.

The Commission has raised concerns that it will not be able to function effectively without enough money. If they cannot be effective in carrying out their core duties, the purpose of establishing the institution in the first place seems a bit…  meaningless now. RM54 million budget and this is the standard of Powerpoint slides ah? #smh. Image from freemalaysiatoday.com

But did the other agencies get the same kind of cuts?

Well.. let’s have a look at another agency – Biro Tata Negara (BTN) under the Prime Minister’s Office. If you remember.. BTN got pretty infamous this year for its alleged racism and brainwashing tactics, in the name of instilling patriotism. And yet, even with negative publicity, the federal gomen allocates RM54 million to BTN for their 2016 budget! Again, FIFTY FOUR MILLION! And what exactly does BTN do? They organise top secret “national building” kursus but their mission failed that one time when proof of BTN’s racism surfaced online with leaked presentation slides (in their own website summore, but was removed shortly after).

So why did the US raise our human rights rating then? Sure, a cut to SUHAKAM’s budget is not a cut to human rights, but it could be an indicator of the importance the gomen is placing on human rights. In case you’re wondering, budget cuts for human rights commissions is not cerita baru. Our friends in Australia got a 30% slash in budget. Their SUHAKAM-equivalent inquired into children in immigration detention and the Aussie government responded with financial restrictions that put their accountability in question.

Perhaps SUHAKAM hasn’t been performing? If so, it would be nice for the gomen to tell people why. When there is no official word on why their budget has been slashed so drastically, naturally people would jump to conclusion with our gomen’s priorities on human rights.

Well, another more popular theory is that regarding something called the TPPA (we talked about it yesterday). It’s a Trade Agreement between the US and a few other countries that is aimed at improving trade in the Asia Pacific. And in fact, one of its goals is to improve human rights, with new labor laws and other conditions such as…

“US laws prevent the country from signing trade agreements with nations that are rated Tier 3, the lowest ranking in the TiP” – The Malaysian Insider

So when the announcement of our tier upgrade was made, critics questioned the credibility of the report, claiming it to be politically-motivated to fast track Malaysia.

At the end of the day, we can’t rely too much on Americans to help Malaysia be a better country (they’re not much into invading these days). But what we can ask for is for them to be genuine about their human rights concerns. Maybe Obama doesn’t know about this budget cut?

The picture above might help get his attention 😉 Thanks JN!

Or you can sign a petition here that protests Obama’s thumbs up of Malaysian human rights.