Anwar’s been back in the news again for awhile now. From his initial full pardon to his latest attempt at getting into parliament, he’s one of Malaysia’s most well known politicians for various reasons with fans and critics alike. One reason why he’s so infamous is perhaps that he’s been accused and jailed for not one, but two separate cases of sodomy. But recently, there’s been accusations that Anwar’s back at it again with the unnatural sex, according to UMNO Supreme Council member Datuk Lokman Noor Adam anyway. 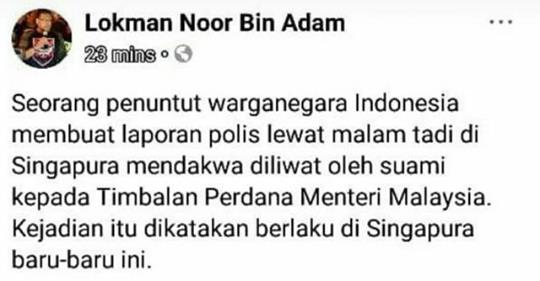 So according to the above Facebook status from Lokman Adam, the husband of the Deputy Prime Minister – beating around the, um,  bush maybe – was apparently accused by an Indonesian in Singapore of sodomy, and that it happened pretty recently. It somewhat matches up, as Anwar was indeed in Singapore recently for the Singapore Summit.

Is Anwar involved in yet another sodomy controversy? Or is this just another one of those political ploys to affect his chances in the upcoming Port Dickson by-election?

Well, for you Anwar supporters anyway, there is some good news because as it turns out…

It’s fake news that spread with a supposedly real source

So in Lokman’s full FB post, it ends with the line ‘Source: Berita Mediacorp’. Well, Berita Mediacorp – a legit Singaporean news source – actually saw the post and we can only assume that they reacted like this: “wtfbbqptptn?”. We say so because Berita Mediacorp actually published an article debunking the claim that they were the source of the whole Anwar Sodomy 3.0 shenanigans.

“Berita Mediacorp was informed of the viral status on social media and Mr. Lokman claims it was sourced from Berita Mediacorp. This is completely untrue and the news spread by Mr Lokman in his status is fake news,” – Berita Mediacorp, translated from their article

When your supposed source of info tells you your info is wrong, your info is probably wrong laa. Lokman perhaps knew this too, and later deleted the status. He then uploaded another Facebook status correcting his previous claims, admitting that Berita Mediacorp informed him that it’s fake. However, that’s not the end of Lokman’s woes following his Sodomy 3.0 allegation. PKR strategic communications chief Fahmi Fadzil made a police report regarding Lokman’s claims. Lokman was then called in for questioning by the police over the issue. On top of that, another three people also made police reports against Lokman over his Facebook status.

“The irony is that the previous BN government, in which Lokman was part of, had asked everyone to check before spreading news. But he himself has failed to check. This highlights the failures of the previous government,” – Fahmi Fadzil, as quoted by Channel News Asia As for the the guy implicated in this – you know, Anwar – he seems to be taking it quite lightly to say the least, probably due to some by-election coming up. He did however have this to say about the sodomy claims that Lokman made:

“This (being accused of sodomy) has been going on for 20 years. Enough lah … please cari modal lain. I am not affected and least bothered,” – Anwar Ibrahim, as quoted by The Star

Now you’d think that this is the end of the Sodomy 3.0 story, and you’re actually right #ihatecilisos. However, while looking up on Lokman for more info about the guy, we found some interesting stuff about the UMNO Supreme Council member, such as the fact that…..

He was a leading figure in the Reformasi movement, and was jailed for it

An UMNO Supreme Council member being a former Anwar supporter and Reformasi leader? Hey, weirder things have happened such as, um, GE14. But anyway, yep, Lokman used to be a leading figure in Anwar’s reformasi movement, and was even jailed for years under the Internal Security Act (ISA) for it.

Lokman first entered into mainstream politics in his teens, joining UMNO and becoming the Youth chief of his local UMNO division by the time he was 18. He would later rise up the ranks, holding positions such as being part of the Rural Development Committee of UMNO and Secretary of the Arts and Culture Movement of UMNO Youth. However, before y’all roll your eyes and complain that he’s an overachiever, in 1998, his time in UMNO would come to a halt.

Amidst the Anwar-Mahathir controversy that happened during the late 90s, among those in Anwar’s camp included a young Lokman Adam. He criticised Mahathir, resulting in him being sacked from UMNO. He would then go on to lead a series of demonstrations during the height of the Reformasi movement as well as to fight for the release of Anwar. This ended up with him being put in jail under the ISA twice, first in 1998 for two months and then again in 2001 until his release in 2003. 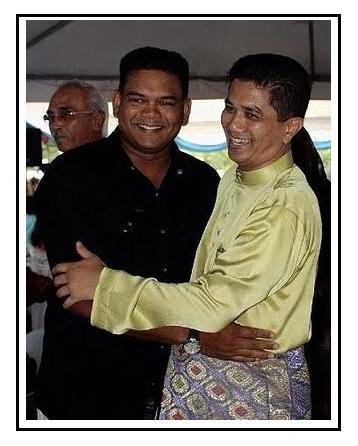 He was also still involved in politics despite his sacking from UMNO, albeit this time in PKR (known as KeADILan back then, but we’ll just use PKR laa k). He was made the leader of the Johor PKR Youth in 1999 and was even a PKR Supreme Council member following the party’s first election. However, like how every teenager has their ‘angsty emo phase’ the young PKR party would also succumb to some drama of its own. It was during this serious infighting that his time PKR would come to an end.

By 2004, he was the secretary to the then PKR Youth chief, Ezam Nor. Ezam sacked Lokman, claiming that Lokman was plotting a sort of mini coup in PKR by rejoining UMNO and bringing with him several PKR leaders. Lokman also made claims that Ezam was doing the same thing (he and Ezam would both later rejoin UMNO). Incidentally, Lokman also made claims that Ezam was receiving funds from a certain George Soros, which we would later hear about again in 2016. Ezam Nor. Image from Malaysia Gazette

In the end, the then party president Dr Wan Azizah suspended him from the PKR Supreme Council, and later sacked Lokman from PKR altogether. Despite some calls for him to rejoin PKR following Anwar’s release from prison after the first sodomy case, he refused, saying:

“What for should I rejoin Keadilan? I was fired with my dignity insulted and spat on… I won’t join them again as I heart isn’t with them anymore,” – Lokman Adam, in 2004, as quoted by Malaysiakini

These days, he seems to be UMNO through and through

Lokman would later rejoin UMNO in 2006. He would again rise thru the ranks super quickly, becoming an exco member of UMNO Youth in 2008, director of the Special Affairs Department in 2010, Finance Ministry strategic communications director in 2016 before winning a spot on UMNO’s Supreme Council earlier this year. He was also BN’s candidate during the recent Sungai Kandis by-election, altho he lost that to Pakatan Harapan. Not bad for someone who got sacked from the party a while back huh? Kandis guy win the by-election? No, he lost. Image from UMNO Online

Coincidentally, his brother has recently been charged under the Sedition Act for posting a disrespectful photo of Mahathir. Needless to say, Lokman criticised the govt’s actions, pointing out the hypocrisy of using the same tools to harass dissent that they promised to get rid of prior to the elections. Gerakan and NGO group Anti Sedition Act Movement have also come out criticising the arrest.

Regardless of what’s currently happening to Lokman, his history makes him quite a unique story in our political scene. With more twists to his tale than a gymnast doing extreme yoga, his rise to the upper ranks of UMNO means that Lokman remains a character we should perhaps pay attention to.

Share this article:
NAH, BACA:
Malaysia's SOSMA vs USA Patriot Act… Which one is worse?