*If you have already read this article, click here to skip to the update*

We all know Proton, right? Either as Malaysia’s national carmaker or the positively charged subatomic particle. Thankfully for everyone involved, this article is about the carmaker.

We’ll get into all the nitty-gritty details later in the article but, as a quick summary, Proton is in the middle of serious negotiations with foreign car manufacturers looking to buy into the company. While the details are a secret for now – to the point that only one of them confirmed that negotiations were happening – they are expected to finalize an agreement by March 31st this year. The two foreign manufacturers currently in the lead are Geely, a Chinese manufacturer that bought Volvo in 2010; and Groupe PSA, a French manufacturer most known for Peugeot and Citroën. And what they’re negotiating isn’t small potatoes either – Geely is rumored to be leading the negotiation with an interest to buy a 51% equity stake in the company. If you haven’t watched Shark Tank, this means that they will basically own enough shares (Majority shareholder) to have a major influence on how the company is run.

Of course, this news has resulted in some criticism with the brunt of it coming from the guy who started Proton in the first place – Dr. Mahathir.

“My fear is that if we do not own Proton any more the Malaysian automotive industry will suffer a great loss. … Having a strategic partner is okay. But once Proton is sold to foreigners it will cease to be a national car. It will just be producing foreign cars in Malaysia.- Dr. Mahathir, as quoted from his blog by Malaysiakini.

So what’s the deal here? Is this another (alleged) bailout by China to cover the massive lubang left by the 1MDeBacle™? Or is PM Najib trying to kenakan Mahathir back by getting rid of another one of his legacies, especially since Mahathir was also taken out of Petronas for not supporting the government?

Actually, it’s because Proton is losing a lot of money. Like a lot. Of Money.

Sorry, but sometimes the truth is so boring it hurts.

It seems that Proton has been more of an electron since the company’s been in the negative for a while –  losing close to RM650 million in 2015. And in 2016, their losses were so bad that it actually made DRB-Hicom, Proton’s parent company, post a loss of RM992 million. DRB-Hicom themselves have said that their performance that year was actually commendable… if Proton was excluded.

But that’s not the worst of it. It seems that Proton is having trouble paying their suppliers and service providers, so they’ve allegedly gone to the point of offering unsold cars as payment – which apparently isn’t too hard because they have an estimated 30,000 unsold cars sitting in a parking waiting to be loved 🙁 .

Considering how Proton has a natural advantage over foreign brands thanks to protectionist policies like the super high import duties placed on imported cars – even the foreign brands that are locally assembled (read more here) – that makes a local car more affordable for most Malaysians, the problem is that Proton cars just aren’t selling. And we’re not making this up either… it was revealed in Parliament that, between August and October 2016, 22,800 Perodua Bezzas were sold compared to 7,500 Proton Personas (2016 model). Considering that these two cars are competing in the same price category, the difference in sales is too banyak ber-Bezza to ignore la. 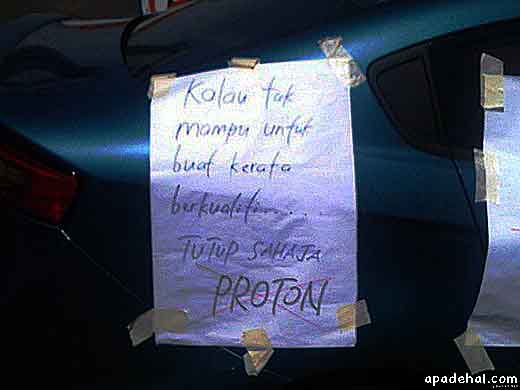 It’s no secret that Proton has received a lot of help from the government since the first Proton Saga rolled out over 30 years ago (including an annual RM200 million R&D grant from the gomen), and now many are of the opinion that these protectionist policies have made Proton too comfortable – leading to bad quality control and underwhelming cars. There’s a window of opportunity for a joke here, but it got stuck.

One person who holds this opinion is PM Najib:

“Proton flourished, yes, but only due to a very high level of government help. … There has been too much political interference in Proton’s strategy, [management], and business model. … We cannot put the people’s money into ventures that cannot support themselves.” – PM Najib, as quoted by New Straits Times.

Between 2004 – 2007, Volkswagen and General Motors actually discussed a similar sort of partnership with Proton, but it was apparently turned down because the government didn’t like the idea of giving up control of Proton to a foreign company. This time though, when Proton asked the gomen for a RM1.5 billion soft loan to pay their suppliers, the gomen approved it – on the condition that Proton find themselves a foreign partner and turn their business around.

So…. why does China want Proton?

So now that we know why Proton is so eager to get a foreign partner on board, the other question is why a foreign partner would want to be on board? We’ll focus on Geely/China since they’re the ones leading the race.

Now, China has a bit of a problem in the international market for two main reasons – they’re a bit behind on research and development, and there’s a perception that Chinese brands are inferior. Their solution?

We’ve seen this in the tech industry such as Lenovo buying over IBM and Motorola, but cars are a lot more complex than that… it’s an expensive investment that relies a lot on brand recognition and trust. Time Magazine summarized China’s problems with the automotive industry as “lacking technology, experience, and brand power,” where even Chinese consumers associated local brands with bad quality. So to play catch-up, Chinese companies started buying over established car companies starting with Geely’s purchase of Volvo in 2010. You might say some of their car designs were quite… geely. Image from AllCasBrandList

Proton has some pretty strong reasons for any car company who wants to expand in this region to sign up with them, such as not having to actually build a factory. Proton’s Tanjong Malim and Shah Alam plants can churn out 400,000 cars a year, not to mention agencies and other services already set up. Not just that, these cars can be shipped off tax-free to any of the ASEAN member countries – a huge advantage to anyone looking to expand their business in this region.

So is this why Geely wants that stake in Proton so bad? Well, according to sources interviewed by The Star, what Geely really wants is… 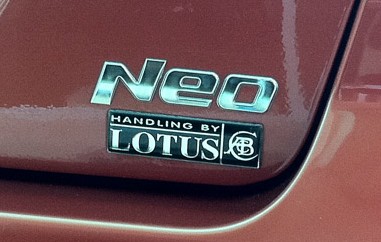 This badge is a common sight on Proton cars nowadays. Image from CarsIHaveOwned.

Lotus is a British sports and racing car company that Proton bought in 1996. Since then, they’ve been helping to improve the handling of newer Proton models as well as making their own cars – the Lotus Elise being the most common one in Malaysia. The Star’s sources claim that Geely is buying Proton to get access to Lotus’ sports car technology while Groupe PSA is more interested in Proton’s manufacturing facilities:

“Proton is of no use to Geely. It wants Proton because of the auto technology in Lotus. And for PSA, which is strong in sport-utility vehicles (SUVs), it is not keen on Lotus.” – Unidentified source, as quoted by The Star.

Why should we be happy Proton getting sold? Tak sayang negara ke??! When the first Proton Saga rolled off the production line in 1983, it wasn’t just a car coming out of a factory – it was the representation of the future of Malaysia as an industrialized country. In fact, the Proton Saga was named as Malaysia’s ‘Man of the Year’ in 1985 despite not being a man. It was a symbol of national pride – a sign that Malaysia could stand among the other industrialized nations during a time when the only other Asian country with it’s own automobile industry was Japan.

“The Proton Saga is more than just a quality automobile. It is a symbol of Malaysians as a dignified people.” – Dr Mahathir in 1985, as quoted by Mantle Jonathan.

And if you look at it this way, then yes, the idea that Proton will no longer be wholly Malaysian-owned can be quite a kick to the undercarriage.

But like it or not, there are two things that never lie – Shakira’s hips and numbers. Without a foreign investor coming in, it doesn’t take a business guru to tell you that the other alternatives are that Proton will have to gulung tikar – resulting in at least 70,000 jobs lost from both Proton and their suppliers and agents – or continue to rely on assistance from the government to keep themselves afloat which, considering the economic slowdown (and budget cuts), would look something like:

On the other hand, having any foreign company coming in would mean that Proton would not only receive the injection of funds it desperately needs, but also to improve their technology, strategy, management, and production methods in order to become competitive again – not just locally, but on the global scale. And of course, this would translate to more jobs in the future.

“The strategic partner can help enhance Proton’s technology and ability to compete in the international markets and produce high-quality cars.” – Johari Abdul Ghani, Second Finance Minister, as quoted by Malaysiakini.

Perhaps former minister Rafidah Aziz, who had a hand in coming up with the National Automotive Policy, puts it better:

“Look, national pride will have to justify that pride – very important. If our national pride is a failure, then no point la kan? … [If Proton] can compete in those areas that matter, the fact that it is a national car is just a bonus.” – Tan Sri Rafidah Aziz, in BFM interview, as quoted by Carlist.my.

So from a purely practical standpoint, yes, perhaps we should be happy that Proton now has a chance to stand on its own four wheels rather than be known as The National Car That Still Needs Government Assistance 33 years Down The Road. Either way you look at it, the only thing Malaysia will lose from this deal is national pride; and national pride doesn’t put food on the table. But let us know what you think in the poll below:

*UPDATE: Geely pulled out of Proton and will probably not call in the morning According to the South China Morning Post, Geely President An Conghui confirmed that the company was withdrawing from the bid to acquire Proton. While he didn’t elaborate on the reasons, Geely’s Chairman told Bloomberg earlier in March that he was planning to pull the company out of the bidding race because Proton was flip-flopping around more than a fish with slippers:

“They keep changing [plans], today it’s this, tomorrow it’s that … They haven’t decided what they want.” – Li Shufu, Geely Chairman, as quoted by Bloomberg.

Considering that the government has already said that they won’t interfere with the bidding process, the explanation on Geely’s withdrawal would likely go back to the Proton’s management team, which at the time of writing has not released a statement. However, this might possibly be tied to a statement made by International Trade and Industry Minister Datuk Seri Mustapha Mohamed in April last year:

I have been informed that there were instances when Proton appeared to be unprofessional in its decision-making process. … it is important that a competent leadership team be appointed in the company. – Datuk Seri Mustapha Mohamed’s statement on Proton, full text available on New Straits Times.

On the bright side, this update does come with some good news… Groupe PSA is still planning to stick around and come up with a deal. With the March 31st deadline fast approaching, it would be interesting to see how Savvy Proton can be from this point.