With the haze getting smoke into our eyes and Indonesia channeling their best Billy Joel impression, it might be a while more before the haze crisis disappears. Like, we’ve already got schools closing, parents worrying, Indonesia blaming, and face mask sales going up faster than a Myvi otw up to Genting Highlands. It’s even led to some people in Twitterjaya to get as many fans as possible to blow back the haze to Indonesia.

So besides blowing back the smoke to Jakarta, what can we do? Well, the govt has actually been taking the initiatives to not only speak to Indonesia, but also to help alleviate the situation in some of the worse-affected areas in Selangor, Negri Sembilan and Melaka. How? By a (not so) simple process called cloud seeding! According to Meteorological Department director-general Jailan Simon, there was a cloud seeding operation held just a few days ago managed to get rain in places such as Cheras, Bangsar, Petaling, Kuala Selangor, Hulu Langat, Klang, Gombak, Seremban, Tampin, Jelebu, Alor Gajah and Jasin.

“Although the rainfall was not as comprehensive as expected, we are glad the operation was fruitful, ” – Jailan Simon, Meteorological Dept D-G, as quoted by The Star

If it’s good enough to combat the smog, why don’t we hear more about it? Well ekcuali….

We have actually been seeding our clouds since the 1980s!

Well, we’re not sure exactly how far back, but according to the government archives, the first time Malaysia ever used cloud seeding to address water shortage was back in 1988. We’ve actually done cloud seeding even before that, but only to lessen the effects of haze. The one in 1988 was the first to use rain to fill up several dams in Selangor that have reached critical levels, and it was done and paid for by Puncak Niaga (M) Sdn Bhd. Cloud seeding over Sumatra by RMAF personnel. Img from The Star (2005).

Kewl! So how does it work? To answer that, let’s look at how clouds and rain work. You can read about it in more detail here and here, but basically the air is filled with water vapor, and at the higher (and/or colder) parts of the sky, the water vapor condense into liquid water droplets, forming clouds. It’s easier for water vapor to condense when they have a surface to collect on, so they often condense around tiny specks of impurities in the air, like dust, pollution or even salt particles from the sea.

These impurities are commonly called condensation nuclei, and together with water vapor that condense on them, they form the tiny water droplets that make up clouds. Rain happens when these droplets combine with each other, becoming too heavy to stay afloat. The actual scientific explanation is a bit more complicated, but basically this is the gist of it. 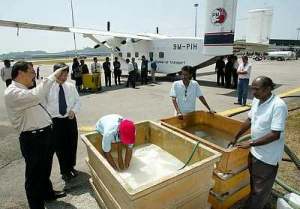 Salt being mixed with water, before loading on the waiting plane. Img from The Star, 2005.

Cloud seeding basically gives the water vapor in the target cloud more nuclei to cling to, and according to Malaysia’s Meteorological Department (Met), we currently use two types of seeding: dry and wet. Wet seeding is usually done on higher clouds (between 5,000 to 8,000 feet), and it involves spraying clouds with common table salt (sodium chloride) diluted in water.

Dry seeding, on the other hand, involves strapping several flares onto an aircraft and lighting them along the bottom of suitable clouds, usually at altitudes of between 3,000 to 5,000 feet. These flares release hygroscopic (water-attracting) materials like table salt, potassium chloride, and/or magnesium oxide into the target cloud.

Leaked footage of a cloud seeding. Gif from Gfycat.

While there seem to be cloud seedings by private companies, news of those are rare, and they’re mostly done by the government. According to this news report, the order comes from the Cabinet, and it is usually carried out by both Met and the Royal Malaysian Air Force, using funding from the National Security Council (NSC). And while the cost differs from report to report, cloud seeding seems to be more expensive in recent years.

According to the book “Indonesia’s Fires and Haze” by David Glover, during the 1997 haze each cloud seeding-flight is estimated to cost about RM8,000. 118 flights were carried out in Sarawak at that time, bringing the total costs for flights in Sarawak alone to RM944,000. Adding to the cost are the RM20,000 Met paid out in staff allowances and RM6,300 spent in creating the salt solution (diluting 50kgs of salt in every 1,000 liters of water), bringing the estimated cost of cloud seeding operations in Sarawak at that time to RM970,000. 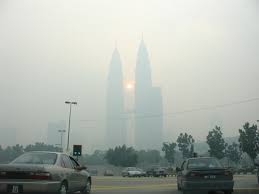 Which seems quite reasonable, in such circumstances. Img from ExpatGo.

It may not seem like much in the grand scheme of things, but we don’t just do one or two seedings per year. In the 1997 haze, the Malaysian government carried out a total of 252 cloud seeding operations, including 39 in Indonesia, which brings the total cost up to RM2.08 million. The 2015 haze, on the other hand, saw the government carrying out 29 seedings nationwide, which cost them RM1.45 million, which means that the average cost is RM50,000 after all.

While we can’t find the total for 2016, Met’s annual report said that 85 cloud seeding operations happened that year, which assuming the cost per operation to be RM80,000, totals RM6.8 million. Wah lao literally making it rain weh! However, despite the price tag, one might wonder…

Does cloud seeding really work, or are we better off doing a rain dance?

It might seem to be a strange question to ask, but consider this. A report had quoted that there are several pre-conditions that must be met before a cloud seeding can happen, including stable atmospheric conditions, high humidity in the air and the presence of towering cumulus clouds. So say a huge cloud appears, it was seeded, and it rains soon after. Would it still have rained anyway if the clouds haven’t been seeded? And would the rain be just as heavy?

Those are tough questions to address, since we can’t find any concrete data to say for sure whether or not cloud seeding did anything. On one hand, the government had been doing this for a long time and spent millions towards it, so if it doesn’t work, they would’ve logically stopped a long time ago. One report said that rain did fall in several areas and cloud development did happen after some cloud seeding operations, and another quoted Met’s cloud seeding division to say that the success rate could reach 70%, but that rate is for reducing haze. An example of a towering cumulus, aka cumulus congestus, if you’re curious. Img from Mapio.

On the other hand, plenty of articles that speak of cloud seeding approached it less optimistically. In Dubai, where creating rain is serious business, their National Center for Meteorology and Seismology (NCMS) found that cloud seeding success rates globally are between 15-30%, and no more.

“There is no particular percentage of cloud seeding success; it depends on the size and intensity of the cloud. Throughout the previous studies, it was showing out the success of rainfall enhancement is on order 10 to 15 percent in turbid atmosphere, while it is in order of 25 to 30 per cent (in non-turbid conditions),”- an NCMS official, to Gulf News.

While cloud seeding had been around for a long time, proving how effective it is or if it even works at all had been hard outside the laboratory. For one thing, an instrument that can measure the size of the water droplets in seeded clouds in real time had been scarce, and as have been established before, weather can be pretty chaotic and unpredictable, so you can’t really replicate the exact same conditions in nature to rule out coincidence. Some had tried to compare the amount of rainfall instead, like a recent research in Israel which compared the rainfall data from periods of seeding and non-seeding, as well as the amount of rain in nearby non-seeded areas to see if cloud seeding using silver iodide and frozen carbon dioxide work. They’ve found that it’s not really that effective in increasing rainfall, and most increases happen by chance.

Despite the uncertainty surrounding cloud seeding, it’s still around as it is seen as a cheap way to add additional water to an area. According to Arlen Huggins, a cloud seeding expert at the Desert Research Institute in Nevada, USA, even a 10% increase in rainfall is economically sound for a large area. And recently a team of scientists used radar to detect large water droplets in a seeded cloud and found that they appear along the path taken by a seeding plane, so maybe cloud seeding does something after all. But exactly how much effect does it have? That we don’t know for sure.

Regardless of whether cloud seeding works or not…

Maybe we should all ‘sediakan payung’ before it ‘hujans’

According to a 2016 report, Malaysians have one of the highest water consumptions per capita in the world, even higher than countries like the US and Australia. On average, a Malaysian uses up 300 liters of water a day, or 109,500 liters a year, almost double the UN’s 165 liters a day benchmark.

“In the span of one year, the ‘extra’ water we use is about 50,000 litres (per person). Without hesitation I can say this is a form of was­tage and does not fulfill the Government’s desire for its citizens to lead a green lifestyle,” – Datuk Seri Dr Maximus Ongkili, former Energy, Green Technology and Water Minister, to the Star.

It is estimated that every Malaysian have access to more than 5 million liters of renewable water every year, yet we still face problems like water shortages. While some of it may be due to bad governance, it’s hard to ignore the 300 liters a day thing. We’re not going to go all WikiHow on y’all and list out the various ways you can save water, but it you want to you can check it out through this link. Aiyo. Img from The Star.

Getting back to cloud seeding, according to Arlen Huggins from earlier, since you need a cloud for seeding it probably won’t save you if you’re already in a drought with no clouds in sight.

Nevertheless, the government seems to hold off cloud seeding operations until things get really critical (such as the haze crisis currently going on), and looking at the price tag, it’s quite understandable. In any case, the cloud seeding can only help alleviate the symptoms of the haze, not fix the problem at its source *coughIndonesiacough*.

Share this article:
NAH, BACA:
OMG Malaysia so hot, but why did it rain ice in Shah Alam?!