*This article was originally written in BM. Click here to read it on SOSCILI.

We tend to think of the first PM of Malaysia, Tunku Abdul Rahman, as well-loved and respected by the rakyat. After all, he was an icon. But just 10 years after Merdeka, on 3 March 1967, an angry mob set fire to an effigy (paper cutout) of Tunku! Along with it, they burned an Utusan Melayu article written in Jawi and branded the newspaper “pengkhianat” (traitor) and “pengampu UMNO” (UMNO puppets).

“One guy who couldn’t control his emotions even tried to push Utusan Melayu photographer, Hussein Nor, into the flames, during the burning of the article, but was he held back by Utusan reporter Taib Ahmad.” – Zainuddin Maidin, former Utusan Melayu Editor-in-Chief 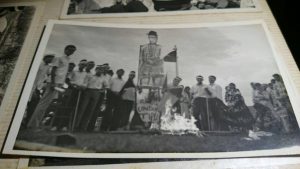 Protesters set fire to an effigy of TAR. Img from thepatriots.asia

In the climax of the protest, the crowd of 2,000 people carried a coffin painted with the words ‘Perkara 152’ from Dewan Bahasa Pustaka (the government department responsible for upholding use of the Malay language and literature), and marched it to Tunku’s house and to Parliament.

But what was everyone so furious about?

Merdeka from the British already still want to use English? Carrying the coffin on their shoulders, they marched to Parliament. Img from puisikabur.blogspot.my

As the part about Dewan Bahasa Pustaka (DBP) would’ve clued you in, the protest was about defending the Malay language. In the 10 years that Malaysia had achieved independence, there was a burgeoning community of Malay writers, advocates and nationalists. DBP itself was established on 22 Jun 1956 for such a purpose.

These people were dissatisfied because English was still being used in official government business, when Article 152 in the Federal Constitution (the boss of all laws), states that Malay is the national language! Now what’s interesting about Article 152, is Clause 2, which allows for a transition period of 10 years from Merdeka Day (31 Aug 1957), for the continued use of English in all official purposes.

But when Dewan Rakyat tabled the Language Bill 1967, the transition period was abandoned. During the 10 years, it was said that the country (in general) failed to improve BM vocabulary, there were not enough BM teachers and lecturers in schools/unis, and BM was seen as worth teaching only as a language subject, or for literature, not the science field. Malay NGOs were furious to find that some provisions in the Bill maintained English in some areas, especially in the court system. So, the literary community formed a movement, Barisan Bertindak Bahasa Kebangsaan (BBBK), to uphold Article 152… hence the words ‘Perkara 152’ on the coffin, symbolising the ‘death’ of the Malay language.

They marched to Parliament led by Syed Nasir Ismail (DBP Director), Abdullah Hussain, Usman Awang (both novelists and National Laureates [aka Sasterawan Negara]) and a number of language advocates. Addressing the crowd, Syed Nasir’s voice was choked with emotion as tears rolled down his face:

“I cry not because I am afraid, but my tears come from my heart, as I ponder the fate of my nation. I cannot do and say anything right now. I am bound. One day when I’m no longer bound, I will pour it out to the people. Now there are attempts to destroy me, to degrade me…” – Syed Nasir, DWP Director, quoted from Utusan Malaysia (28 Feb 2010)

He only got that far before his voice was drowned by the claps and cheers of the fiery crowd. They were all the more encouraged by Usman Awang’s poem: ‘Keranda 152‘. It goes: Nevertheless, the Government was adamant in keeping English as a second language. So did the incident really come to nothing? Not quite…

Two months later when May 13 happened, everything changed. It was a catalyst to make BM the main medium of communication. As a result, English SJKs were abolished and turned into Sekolah Kebangsaan. Additionally, Universiti Kebangsaan Malaysia (UKM) was formed as an alternative to the British-established Universiti Malaya. This was DBP’s greatest victory to date… but is it really over?

Actually, there have been repeats of Coffin 152 protests throughout our history Meanwhile in 2009. Img from Wikipedia

You know that at one point, schoolkids learnt Science and Mathematics in English. This programme was called the Dual Languauge Programme (DLP) or Pembelajaran & Pengajaran Sains & Matematik dalam Bahasa Inggeris (PPSMI). It was implemented during Tun Dr. Mahathir’s time as PM in 2003.

However, some people were against this policy, specifically a group called Gabungan Persatuan Penulis Nasional (GAPENA), which at first protested with a soft approach. Later they became more aggressive in protesting PPSMI, forming the more hardline Gerakan Mansuh PPSMI (GMP), led by none other than A. Samad Said.

Keranda 152 surfaced again on 7 Mar 2009, when thousands marched in protest from Masjid Negara to Istana Negara carrying a, yep, coffin with the words “Keranda 152”. It was chaotic! There was clashes with the cops and tear gas. This was A. Samad Said’s first time experiencing tear gas: 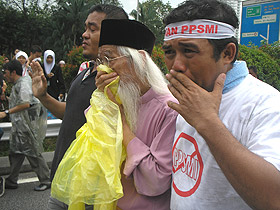 The protesters submitted a memorandum detailing the ‘suffering’ of students having to cope with learning in English throughout those 6 years. In the end, Education Minister Muhyiddin Yassin announced PPSMI would be abolished by 2012.

Then there was another incident in 2016, when PEMANDU proposed a secret idea to implement DLP in 300 public schools. They would teach Science, Mathematics, IT and Design in English and use the language as the main medium… but secretly. When word got out, well there was a big hooha, then start again la the protest. This time the protests were decidedly less chaotic, more of a peaceful nature, but the Coffin was still the main feature. It just refuses to stay buried! The hate for English is strong in these guys. Img from Malay Mail Recently on 28 Feb, Mahathir said that they might consider bringing PPSMI back if Pakatan Harapan wins in GE14.

Honestly, the argument FOR and AGAINST the dual language programme has been discussed to death. You know la, how it goes. People who dowan it say it will split the next generation in half – one will be thinking in an English language-based culture, and another thinking in our native language. Others say teachers can’t cope with teaching in English coz their own grasp of the subject is poor. Advocates on the other hand state that having PPSMI doesn’t mean they’re disrespecting or challenging BM at all! Parents believe learning in English is the good for their children’s future, especially since it’s a global language. In fact, the Parent Action Group For Education (PAGE) discovered that 95% of parents support PPSMI. Not to mention, one of the main reasons grads find it hard to get jobs is because of poor English. These groups too have held rallies to show their support. Why people support PPSMI. Image from The Star

K, let’s not go down the rabbit hole with the fors and againsts.

At this point in time, we don’t have PPSMI, but we have MBMMBI… what dis?? The Memartabatkan Bahasa Malaysia dan Memperkukuhkan Bahasa Inggeris (MBMMBI) policy does as its name suggests, to uphold BM as the official national language but also to strengthen English among students. It has two programmes under its belt, High Immersive Programme (HIP) and Dual Language Programme (DLP). With HIP, it’s all about having English language activities and stuff, while DLP gives schools the option to teach STEM subjects in English.

For Mahathir, he supports PPSMI because he worries that Malaysians will be left behind as the world progresses in science.