[This article was originally written in BM by Soscili. Click here to read.]

As most of us would be so engrossed with New Year and other news about new policies, it’s easy to overlook this recent little news story about the less known Gunung Stong State Park, a forest reserve in Kelantan (sadly, this is not sponsored content). It explains what this reserve has to offer for eco-tourism and one of the things we noticed was the mention of the sightings of certain animals. Being the curious writers we are, we decided to find out more about some of these animals and came across some bad news about one of them, with calls to save this species before it’s too late. So, here we point out some of the endangered animals in Malaysia.

1. The problem with rhinos seems to have more to do with… themselves?

In Peninsular Malaysia, most of the Sumatran rhinoceros population live in protected areas such as Taman Negara, Endau Rompin State Park and Royal Belum State Park. But the population size is dropping because rhinos are hunted for its horns, which have been used in traditional Chinese medicine, priced up to $75,000 (RM310,035 at the time of writing) per kilogram.

According to the IUCN Red List, the Javan Rhinoceros has already gone extinct in Malaysia while the remaining Javan rhinos can be found in Indonesia and Vietnam but critically endangered lah.

And it’s not just the poaching that’s causing rhinos to face extinction. It turns out that they don’t wanna have sex! Yeah, it sounds weird but this is why the rhinos in Malaysia are not multiplying. Main reason is that the gender ratio is not balanced enough for mating. Like how male rhinos are too old while the female rhinos are too young, and vice versa. If only rhinos could find their matches on a dating app. Image from Daily Express.

Female rhinos that don’t get pregnant for too long might experience fertility problems. That’s what happened to Iman, Malaysia’s last female rhinoceros. Iman was diagnosed with uterine tumour and couldn’t reproduce again.

Before Iman, our country also had another female Sumatran rhinoceros named Puntung, who was captured in 2011 in an attempt to breed her with another rhino named Tam but was euthanised in the middle of last year after suffering from major health issues. :'(

2. A local scientist learned something astonishing during a study on black panthers The destruction of their habitat by logging to make way for oil palm and rubber plantations makes the panther among the many species on the verge of extinction, with the panther population declining throughout the country. That’s why panthers are categorised as Vulnerable in the IUCN Red List of Threatened Species. Don’t you just feel like patting it? Image from The Guardian.

Because of this, Rimba Co-founder Reuben Clements and his team conducted a study called Project Black Cloud to collect and analyze the population data of black panthers, tigers and clouded leopards in 60,000 hectares of the Kenyir Lake area, using about 200 cameras to monitor these big kitties.

In that study, they found that there were three black panthers in every 100 square kilometers (10,000 hectares). That means, if you multiply the number of panthers by 6, there were just about 18 panthers in the whole area of ​​60,000 hectares! Looks like the threat of extinction to this species is at a serious stage already.

“This study is very important in making people aware of the importance of preserving wildlife not only for future generations but also for the stability of the food chain. This is because if the panther (the predator) population decreases, the population of other species of animals will increase and this is not good for the forest. “- said Reuben. Our black panther is also known as the melanistic leopard (because it has so much melanin that it’s darker than other leopard species). Image from Rimba.

3. The sturgeon fish is where super atas restaurants get this fancy dish from The sturgeon fish. Image from Oceana.

This fancy dish is caviar which can be found in the sturgeon beluga species, which is a very ancient group of fish that has existed for over 200 million years, since the dinosaurs were still around wei! Although commonly found in Eurasia and North America, there was a sturgeon fish farming project in Malaysia (to be exact, in Kuala Tahan where Taman Negara is), which had to be stopped because it was done illegally.

If you think that caviar is super duper mahal, then you’re not wrong, since it’s priced around $120 (RM496.80 at the time of writing) for 100g of sturgeon caviar. Walau! That’s like more expensive than the current gold price. But what makes this atas food so expensive? Well, it’s due to the very small number of sturgeon fish. Since it’s hard to find this fish, it’s hard to find its eggs. How caviar is harvested. Image from Al Riyadh Blog.

The sturgeon fish tho are exposed to illegal fishing and trade, causing this species to be categorised as Critically Endangered in the IUCN Red List. The number of sturgeon beluga has dropped to 90% over the last 20 years and are estimated to go extinct in 150 years!

NAH, BACA:
The weirdest gifts ever given to Malaysia

Sounds like a long time, but the sturgeon fish takes a long time to mature, so reproduction happens slowly. So, to conserve the sturgeon population, a study by Uni of Miami suggests that fishing quotas be set in such a way that it prevents overfishing. Image from California Dept of Fish and Wildlife.

4. The dugongs’ crucial role in the seas seems to be ignored

Dugongs, which can live up to 70 years, are found mainly in Johor and East Malaysia. They’re also known as sea cows since they’re the only known herbivorous marine mammals, which feed on 30–40kg of seagrass a day.

There are several things about this cute creature that makes it so interesting… Like how ancient dugongs are since there’s a 5,000 year old wall painting of a dugong in Tambun Cave in Ipoh. And how dugongs are polyandrous species because female dugongs have multiple baby daddies at the same time. :3 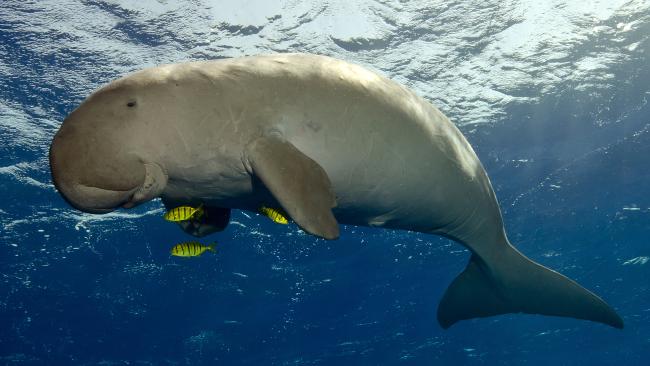 Who can resist the cuteness? Image from Fraser Coast Chronicle.

And you know how human adults have several physical features of varying magnitudes that make our genders distinguishable like facial hair, voice and so on? Well, for dugongs, besides their sex organs, you wouldn’t be able to tell since they’re monomorphic species (one form) unless… you look at their tusks. Both genders have it but it’s more visually predominant in mature males.

And did you know that dugongs communicate with each other using vocalisation and visual cues? Visual cues are only used when they’re near each other because they have poor eyesight. So if these fellas are far away from each other and don’t wear spectacles, they have to vocalise with chirps, whistles and barks underwater! And each sound they make has its own amplitude and frequency.. like words in human languages, but for dugongs.

But sadly, the dugong is listed as Vulnerable in the IUCN Red List since there are about 100 of them left in Malaysia. Dugongs face lotsa threats which include (but are not limited to) getting tangled in nets, boat strikes, destructive fishing practices, illegal trade of dugongs and water pollution, which not only kill dugongs but also reduce seagrass habitats (which take a long time to regenerate).

Seagrass is important because it serves as carbon storage, filter and feeding ground for other marine species. And seagrass needs dugongs because dugongs are like ‘ecosystem engineers‘ who constantly “trim” seagrass by eating them resulting in regeneration of more seagrass and using its own, erm, waste product as the fertiliser.

But another problem related to dugongs could be that not much research has been done on them in Malaysia. And although Malaysia has a National Plan of Action for Conservation and Management of Dugong and other natinoal and international legislation protecting dugongs, there are still no specific terms on protecting dugongs and seagrass. Luckily, the Dugong and Seagrass Conservation Project has raised $414,677 at the time of writing to help protect dugongs and seagrass in Malaysia.

5. The Malayan tigers may be our national pride but they still die in.. road accidents? Image from our Soscili peeps.

The Malayan tiger’s scientific name, panthera tigris jacksoni, was derived from the famous conservationist Peter Jackson (NOT the Lord of the Rings director) to commemorate his wildlife conservation efforts.

But the funny thing about giving this subspecies a Westernised scientific name is the fact that this type of tiger can only be found in Malaysia, according to a study where scientists conducted a DNA analysis of 134 tigers captured in the Asian region. Look at this big kitty scrunching its nose. Image from Seven Pie.

Reports in 2015 say that the Malayan tiger population has fallen by 50% over the last decade due to poaching and destruction of natural habitats. In the past 5 decades, the number of tigers in Malaysia have dropped from more than 3,000 tigers to the most recent estimate of 250-340 tigers.

Tiger deaths also happen due to accidentally getting hit by vehicles on highways while trying to cross them, which is why ecological bridges have been built in other countries to allow for safer movements of animals across highways.

Because of such staggering drops, the Malayan tiger is currently listed in the IUCN Red List as Critically Endangered. So if there’s no tiger in Malaysia, then would it still be relevant for us to use a tiger image in the logos?

Remember that Pocahontas song? Well, ecosystems are something like that

It’s a major problem that many other animals are also on the verge of extinction because each species has its own role to play in the ecosystem and the food web. And if one species goes extinct, the food web collapses and loses its balance.

Like if a predatory species like the Malayan tiger or black panther goes extinct (touch wood), then the estimates of the prey population (like deers) would shoot up so much that there won’t be enough food available to feed all the prey, and vice versa. Nitrogen cycle, another example of how ecosystems work. That’s why Pocahontas sings that we are all connected to each other in a hoop that never ends. Image from Thinglink.

At this point, you’d probably feel pretty helpless about it, but the good news for those who really feel kesian for these animals is that there are a few ways to offer some help… Here’s how.