So some big big news over the past few weeks. Finance Minister Lim Guan Eng has recently accused the former administration of ‘robbing’ the country’s coffers when he found that RM18 billion in GST refund money had gone missing. Now that’s one big accusation to make, and big claims should be verified. Indeed, it was Khairy Jamaluddin who made a police report against the former head of the Finance Ministry – the man himself, Najib.

Later today and tomorrow I will be lodging a report with @PDRMsia and @SPRMMalaysia against former top officials of @MOFmalaysia at the material time the allegation took place. This is so that an open investigation can take place to a certain the veracity of @guanenglim’s expose.

It’s been a couple of weeks since the initial allegation by Guan Eng – which is now RM19.4 billion due to a decimal error btw – which has given the boys in UMNO some time to reply to the accusations. Najib himself made the most noise as he claims that the new Harapan govt is responsible for the missing money.

According to Najib, the new guys in Putrajaya probably spent all the “missing” money to make up for the losses incurred when they zero-rated the GST back in June. But Najib isn’t the only guy in UMNO. In fact, by the looks of things, UMNO have disavowed the man like how IMF disavows Ethan Hunt in every other Mission Impossible movie.

So that leaves us with the question – what about the rest of UMNO? What have they been saying in response to Guan Eng’s claims that RM19.4 billion have been robbed by the previous administration? Najib can’t be the only one to know what happened to all that moolah right?

Well okay, if we’re going to move on from the former administration’s numero uno, it makes sense then to move to the former number two right. And that number two is none other than the new UMNO president – Datuk Seri Dr Ahmad Zahid Hamidi. “Hmmm, where did we leave all that money ah…?” Image from Straits Times

According to the former Deputy Prime Minister, the supposedly missing RM19.4 billion in GST refund money isn’t missing or lost at all. Instead, what happened was that it had been entered into a consolidated fund rather than the GST funds. Kinda like how your mum gives you cash to pay for groceries but you keep the change. She doesn’t have the money anymore, but it’s not technically lost.

As for how that money got into the consolidated account instead of the GST funds, Zahid says that, um, he doesn’t know. He says that he wasn’t aware of the money going into the consolidated account as it was done under the Treasury. While some may think that’s just his way to cuci tangan and not be involved in the issue, to give him the benefit of the doubt he was the Home Minister laa and not in the Treasury.

…probably not how Zahid Hamidi reacted when he said he wasn’t aware. GIF from Giphy

He does give us some idea of where the money went as well as how to get it back, adding:

“If the money was spent on a variety of projects that are determined based on the annual budget or outside the budget speech, then an additional provision needs to be made for us to debate in Parliament,” – Zahid Hamidi, as quoted by New Straits Times

Now that we know what the most powerful member of the previous administration not being charged in court has to say about the missing RM19.4 billion GST refund money, what about the politician most known for defending the GST?

2. Ahmad Maslan – “Err, shouldn’t it be your job to recover that money”

Ah yes, former Deputy Finance Minister, Datuk Ahmad Maslan – the man who first made headlines back when the GST was first introduced for his staunch defense of the tax, which included this memorable tweet:

Ahmad Maslan has returned to the GST issue, this time rebutting Guan Eng’s claims that the RM19.4 billion in GST refund money had been robbed by the previous govt. Instead, he sorta questions the current Finance Minister’s job:

“Regarding the issue on input tax raised yesterday, that is the minister’s job to recover the lost money. If you want to take over the government, you got to take along the debts with it,” – Ahmad Maslan, as quoted by The Edge

He does however agree with Zahid Hamidi as to where the money might be. Maslan points out that the RM19.4 billion isn’t lost or missing, but that it has gone into a consolidated fund and has been used for developing the country.

3. Johari Ghani – “Nothing is missing, it’s just that the new govt dunno where”

Well since we already told you what the previous Finance Minister and Deputy Finance Minister said about the missing RM19.4 billion, it wouldn’t be fair to leave out Datuk Seri Johari Abdul Ghani, the former Second Finance Minister right? In a short and to the point statement, here’s what he had to say:

“There is no money missing. It is just that the present government doesn’t know how things work, (including) how the refund claims work,” – Johari Abdul Ghani, as quoted by The Malaysian Reserve Unedited image from The Sun

Ouch, the shade. Johari has also suggested that if the refund process is too problematic and is causing prices to rise, then the new govt can issue refunds on a ‘nett of’ basis instead.

“Prices, if we say six percent is too high, we could make it four percent. Then we’d have to tell the people that we are reducing it from six percent to four percent, but we’re cutting your BR1M, your farmer’s assistance, and subsidies,” – Johari Abdul Ghani, as quoted by Malaysiakini

We now have the responses from the former head of the Finance Ministry to the second Finance Minister regarding the curious case of the disappearing RM19.4 billion, but there is one more guy who dealt with GST that we haven’t talked about yet…

4. Irwan Serigar – “The money isn’t missing, and I’ll report it to the MACC to prove it”

Okay hold up, we know what you’re thinking – “but but Irwan Serigar isn’t an UMNO member ew Cilisos clickbait #ihatecilisos”. Yeah okay so he isn’t technically an UMNO member but we thought that it would be important to put his views on the missing RM19.4 billion GST refund money as he was the former Treasury secretary-general. And his views are…. well similar to most of the other guys we’ve already mentioned earlier loh – the money isn’t lost. Plus to prove that the GST refund money isn’t missing, Irwan Serigar has even lodged a report with the MACC.

“It is baseless. I want the details because he (Finance Minister Lim Guan Eng) said it’s missing, it’s not missing but credited into a consolidated fund. I lodged report with the MACC as I want the truth (to prevail),” – Irwan Serigar, as quoted by New Straits Times

Irwan claims that the RM19.4 billion missing has gone into consolidated funds and then went back to the correct accounts to repay GST claims in accordance to what the Royal Customs Department asked for. He added that the procedure follows the rules as set forth in the Financial Procedure Act 1957.

Well so if everyone is saying the money isn’t missing… is it actually missing?

According to an economist… the money has most likely been used

Seeing how most of the responses from the UMNO brigade (plus Irwan) have been that the GST refund money isn’t missing, our friends over at Soscili decided to do some of their own digging and asked Prof Dr Barjoyai Bardai, an economist working with UKM. 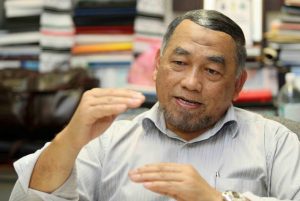 Prof Bardai added that the previous administration did not put it into the GST trust fund so that it can use it first. They probably assumed that they can cover the temporary financial hole thru the next round of GST collection. The issue tho happened when they lost GE14, and the new govt’s act of zero-rating the GST meant that there was no money to replace that financial hole.

“The problem occured when the tax was halted. This meant there was no more money coming in. And like a bicycle, when you suddenly stop cycling, you fall. The issue now is, why it happened. Well, it happened because the rules weren’t followed,” – Prof Dr Barjoyai Bardai, in an interview with Soscili

Well what can we expect the govt to do then to fix this hole? According to Prof Bardai, judging from how things are going, the govt will be looking at either replacing the missing income as well as cutting expenses. As for how effective it’ll be… well, we’ll just have to wait and see.

Share this article:
NAH, BACA:
Wah, so many people playing fireworks. Not illegal in Msia meh?