The article was originally published on 25th November 2019 and has been updated to reflect current news.

Just before the new years, a Facebook post by James Stephen on a green-looking IC became viral:

As it turns out, we do have different  types of ICs but that’s entirely a story for another day.

In the post, James claimed that the green-looking IC is the Sabah Provisional Pass (PSS), which is reportedly for refugees. The National Registration Department has since clarified that the card is NOT PSS but a special, temporary resident identity card known as MyKAS (Kad Pengenalan Permastautin Sementara).

In a separate post, James kept on emphasising the similarities between PSS and MyKAS like their functionalities and he may be right considering how both cards are being issued to non-citizens. PSS cards will be issued to long-staying foreigners especially refugees in Sabah while MyKAS are either issued to migrants who entered Malaysia legally or Malaysian-born ‘stateless’ people.

A few months ago, the Home Ministry announced its plan to introduce a new temporary pass for immigrants in Sabah called the Sabah Provisional Pass (PSS). But not all foreigners will be getting this pass.

It was reported that the pass will be given to an estimated amount of 600,000 immigrants (and their dependents) who currently hold any one of these three passes – the IMM13, Census card or Burung Burung card (we’ll explain more in a bit). The pass, which will cost immigrants RM120, will allow them to stay in Sabah for three years and if they wish to stay longer, they’d have to renew the pass.

“The people in the state are worried about the implementation of the said policy. I am of the opinion that this decision warrants a re-study.” – Hajiji to FMT.

But before go in deeper into that, let’s take a look at how the pass system works.

Turns out, there’s no proper system to monitor foreigners in Sabah

The system that is currently in use are based on three different documents:

The IMM13 (visit pass) document is a valid document recognised by the UNCHR that was given to the Filipino refugees. This document was issued sometime back in the 1970s when the Filipinos fled to Sabah to seek refuge following a civil war in their country. The IMM13 card. Img from FMT

The refugees were also issued with a settlement identification card but, according to the then chief of Settlement Unit within the Chief Minister’s Department, Abdul Jaafar Alip, none of these documents were recognised by the National Registration Department (JPN). That’s not all. When the state govt changed in 1985, the documentation programme ended abruptly.

After the change of state govt at that time, Abdul Jaafar’s unit and the Institute of Development Studies (IDS) conducted a census of all illegal immigrants in the state, regardless of where they came from. We’ve actually written about this before and you can read more here.

“In the first phase, we went to houses that we believed foreigners were living in and conducted a census and in the second phase, we registered them.” – Abdul Jaafar, as quoted by MalaysiaKini.

And exactly under which documents were these illegal immigrants registered? Well, according to Tamparuli assemblyman Datuk Jahid Jahim, the Burung Burung and Census cards were generally issued to illegal immigrants. However, some sources believe that the Burung Burung card was issued to economic migrants aka those who fled from their country due to economic instability. Meanwhile, the Census card is believed to be issued to those registered under the Federal Special Task Force. Despite that, these are not valid documents recognised under the Immigration Regulations 1963.

But even with these various documents issued by the then govt, some foreigners in Sabah were still found with fake documents. Federal Task Force for Sabah and Labuan Principal Assistant Secretary, ACP Abdul Aziz bin Alwee claimed that they once found foreigners with fake Census cards. 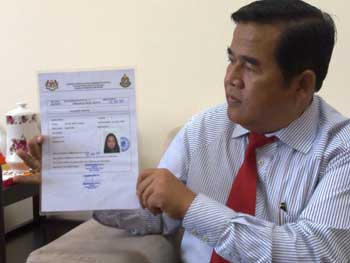 Abdul Aziz with a sample of the Census card. Img from The Borneo Post

In an operation called the ‘Operasi Tanduk’, they found men, women and even children who were pretty much scammed between RM400 and RM2,500(!!) into getting the census cards before entering Sabah.

“It baffles me how the card is still being issued when the govt has stopped issuing it in 1996.” – Abdul Aziz to The Borneo Post.

And because there are various documents with almost similar functions, Home Minister Muhyiddin Yassin claimed that the enforcement bodies such as the immigration department are having a hard time to enforce the law. Not only that, some of these documents like the Burung Burung and Census cards are said to be overlapping each other in terms of their functionalities.

This is why the Home Ministry wants to introduce a standardised system to track all foreigners with those three documents. According to Sabah’s Chief Minister, Shafie Apdal, PSS is a long overdue initiative by the govt since the report by the Royal Commission of Inquiry (on immigrants in Sabah).

“Therefore, with such coordination (documents for foreigners), we want to make sure that they are managed and controlled by (only) the Sabah Immigration Department.” – Shafie as quoted by BERNAMA.

Sounds pretty good so far. So, what’s actually the issue with this plan?

Sabahans are worried that the govt will legalise illegal foreigners

After the Home Ministry announced its plan to introduce PSS next year, there were misconceptions among the Sabahans regarding PSS. One of them is how they perceive that the govt will be legalising illegal immigrants in Sabah.

Well, Sabahans may have a good reason for their concerns seeing as that’s what the govt allegedly plans to do when faced with labour shortage in oil palm plantations. Just so you know, they normally take in Indonesians and Filipinos to work in the plantation sector.

Agriculture and Food Industries Minister Datuk Junz Wong said despite shortage of foreign workers in these plantations, the state govt won’t be taking in workers from other countries. However, the govt plans to legalise Indonesian and Filipino workers to meet the needs of the plantation sector. In fact, Shafie said that besides wanting all immigrants who enter Sabah to have a valid document with them, he also mentioned that implementing PSS is an important step to ensure that Sabah’s plantation sector has adequate workers.

This may increase Sabahan’s worries seeing as how there are actually 1,158,300 non-citizens in Sabah out of 3.9 million people in 2018. This would mean one out of three people in Sabah are foreigners(!).

That might be why Hajiji suggested that instead of introducing PSS, the govt should’ve come up with strict policies to prevent illegal immigrants from entering Sabah such as having valid documents to work in Sabah. He might’ve said this because some of the documents that are currently in use like the IMM13 permits refugees to work in Sabah.

“What the people want is that they (foreigners) who came to Sabah illegally must be sent back to their countries of origin. If they intend to work in our state, they must have a valid document that has been processed or issued by their country.” – Hajiji to FMT.

Former Chief Minister, Datuk Yong Teck Lee, on the other hand, suggested the govt to deport illegal immigrants instead of issuing PSS. But… it’s not like the govt hasn’t been doing that tho. And the current state govt is still committed to deport undocumented immigrants back to their country.

Despite the arguments presented above, we just wanna remind you that PSS is still in the planning stages. This would mean there’s room for improvement. In fact, the latest suggestion by Datuk Dr Jeffrey Kitingan of STAR was to shorten the period of the pass from three years to one year.

“The proposal to shorten the PSS period from three years to one year will be brought to the Foreign Affairs Management Committee level.” – Shafie as quoted by BERNAMA. Translated from BM.

And despite the criticisms received from Sabahans, there are some groups who supported the govt’s plan. Sabah Law Society (SLS), for instance, hails the govt’s plan. Its president Roger Chin said that PSS will eventually help solve the undocumented immigrant issue. Filipino refugees getting documents for their children. Img from The Star Online YouTube.

He also added that the security features of the pass such as biometrics, profile photographs and thumbprints would help the govt to monitor these immigrants better in the future.

“The SLS firmly believes that if the state knows and is able to identify who the irregular or undocumented migrants are, then the state can manage law, order, security and resources more effectively.” – Roger to The Star.

At the time of writing, the govt also mentioned that it will be forming a special task force to monitor PSS. But Roger also pointed out that the govt may also wanna discuss with various stakeholders on how to execute the process of obtaining PSS so that it’s transparent and in an accountable manner.

According to the Home Ministry, PSS will be implemented in June 2020 so, until then, we shall just wait and see how the govt will be executing the plan.