In 2013, the Tourism, Culture and Environment Ministry signed a contract to HIDE a very secret, very mystical place in Sabah. Shhh. This contract will keep the place off-limits to humans for 50 years! OMG, WHAT IS THIS PLACE?!? A nuclear power plant? Area 52? Narnia? Nope…

Wahhh really like a basin wei. Image from mysabah.com

In geology, the word ‘basin’ is used to describe a large low-lying area. It is often below sea level. Before we go on, please enjoy these: But what’s so special about Maliau Basin and why would the government want to hide it from people it for 50 years?

Because it’s the JURASSIC PARK of Malaysia!!!

Haha, no it’s NOT a real dinosaur park that the government wants to hide for itself. Dinosaur BONES also pun tadak. It’s just how they nicknamed it on their tour website. The 58,840 hectare (588km²) area located in Tawau is under Yayasan Sabah‘s management. But it’s not hard to imagine this would have been the Zouk for dinosaurs millions of years ago: Geologists believe the basin formed 15 million years ago, although they have different theories as to how – one possibility is that the ground was originally flat, then soil eroded until it sunk that low. It was discovered in 1947, when a British pilot flew over what he thought was a misty jungle. As the clouds cleared, he found himself encircled by steep cliffs, 915 metres above ground…that’s DOUBLE Petronas Twin Towers’ height at 452 metres!

The almost circular area is amazingly bigger than Singapore, however you’ll prolly find it easier to masuk Singapore than Maliau Basin. The only way in is at the point there the Maliau River exits the basin. That’s why it has stayed hidden from mankind for millions of years. Today, it’s one of the last few places in Malaysia untouched by humans, only one-third is open to visitors, and less than half has been explored by researchers.

Ok, there are no dinosaurs, but this place is very important for conservation because… 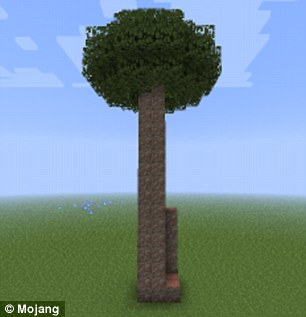 You can grow a Yellow Meranti in Minecraft. Image from The Daily Mail

1. It has a TREE that is featured in a computer game

If you’ve ever played Minecraft, you might have even grown your own Yellow Meranti tree. But what you see on screen doesn’t do justice to the real Yellow Meranti which is said to be the TALLEST tree in the tropics (the region on Earth surrounding the Equator). The tallest one ever found has a height of 89.5 metres in the Basin. Measuring it was the tricky part. Unding Jami, an expert tree-climber from Sabah had to climb to the top with a tape measure. Then he texted the team below:

“I don’t have time to take photos using a good camera because there’s an eagle around that keeps trying to attack me and also lots of bees flying around.” – Undang, New Scientist

2. The whole basin is a WATER CATCHMENT itself A water catchment is an area that gathers water because of its natural shape and the water is used for DRINKING. Hee hee, we knew there was a purpose to its shape! 😆

So, it’s a good thing they State Government is conserving this place because it seems Malaysia is lacking drinking water (until we had to buy water from Singapore). Humans have discovered at least 30 waterfalls here to date, but it’s believed there might be hundreds more undiscovered, making Maliau the waterfall capital of Malaysia. Although Maliau doesn’t have real life dinos, it has amazing biodoversity! There are over 80 mammals, 300 birds, and 35 amphibians confirmed so far. 3. There are Orang Asals living nearby

Ok, there were people around here before the British pilot discovered it… they are the Murut (an indigenous group). Technically they live nearby the basin (not inside) in villages, but go in once a while to hunt or collect forest produce. Maliau got its name from the Murut dialect, which translates to ‘bowl’ or ‘basin’. The Murut are also responsible for the legend of Lake Linumunsut – that supposedly a dragon lives at the bottom of that lake.

So you see, no wonder the Sabah government wants to keep this precious Lost World ‘lost’ for as long as they can.

40 years ago, if you told anyone in Sabah that Maliau Basin is protected, they might’ve laughed! It was originally a timber source for Yayasan Sabah. That means people used to be allowed to CHOP trees for timber last time. WAHH how did it go from timber source to a protected land? Recognising how important the Basin was, Yayasan Sabah voluntarily designated it as a Conservation Area in 1981.

The contract is a Strategic Conservation Plan aimed to CONSERVE and PROTECT this mangkuk-shaped land from detrimental human activity:

“This area will remain out of bounds to anyone – including our rangers – until the expiry of the 50-year commitment. It is part of our commitment to allow future generations to study an area totally untouched by man.” – Dr. Waidi Simun, Conservation and Environmental Management GM, Yayasan Sabah, The Star The Strategic Conservation Plan further adds to two other older laws protecting it… in 1997, it was classified as a Class 1 Protection Forest Reserve under the Forest Enactment 1968. Then in 1999, it was classified as a Cultural Heritage Site under the state Cultural Heritage (Conservation) Enactment. Basically the rules are – kenot demolish, disturb, modify, renovate, repair, build, conteng or even move a single thing in that area.

It is Sabah’s way of saying that this place is very culturally, environmentally, educationally and wholly significant to Malaysia.

BUUUUT even though Yayasan Sabah has set Maliau Basin aside for protection, they still need an income from it mah. So they substitute logging income with eco-tourism income! Yep, Maliau is not completely out of bounds. People can go for tours and stay at designated camps, which were set up to contain human activity. Usually they limit visitors at any one camp to 20 people to further reduce the burden on the environment.

YOU can help by actually going on these tours (Links HERE). Tour charges will include conservation fees which is used to maintain Maliau Basin. It is a formula that could work with the public’s support. Look at Sipadan for example, it has become more valuable as an eco-tourism site than a fishing source. At the same time, eco-tourism can SAVE Sabah’s wildlife from extinction. It’s a two for one deal! “In the logging sector, we realised that once the last tree was logged, that was the end.” – Datuk Masidi, Borneo Post Online

Hopefully the public will understand why we must apply the same principles to Maliau Basin… Not if we don’t want to LOSE the Lost World of Sabah forever.