So. This is the survey we’ve wanted to do for a VERY long time (literally since we started doing surveys) – about what movies Malaysians watch, how they act in cinemas, and of course… what sorta popcorn they like. And really, thanks to Golden Screen Cinemas for being equally curious enough to make this survey possible.

Actually, while we’re in Oscar-winning mood, we also wanna thank our 6893 respondents for making this the 2nd biggest survey CILISOS has ever run! Here’s the breakdown of ugaiz that joined.

Now that we’ve done the credits, grab your popcorn and let’s get straight into the twists and turns of surpising things we found about Malaysian cinema-goers… OMG My popcorn is in 3D!

When asked what influences their decision on which cinema to pick, the biggest reasons were location/parking (81%), showtime/availability (73%) and ticket prices (51%). Another 28% were loyal to a specific cinema brand, while 35% had loyalty cards or credit cards that gave privileges at a specific cinema. RM6 off all movies with a GSC Hong Leong card anyone?

20.8% chose a cinema based on food, while 3D was right at the bottom of priorities, with only 2.24% of respondents who would pick only cinemas that had 3D.

Surprisingly, the younger age set are those who prefer local films, and horror, while those ABOVE 30 are half as likely to watch romantic movies, and lean more towards historical bio pics. But for us at least, that wasn’t the most surprising stat… 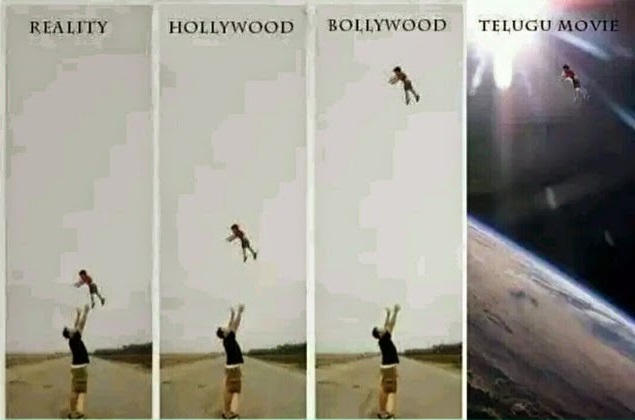 Given the references thrown about online, and Malaysians appetite for exaggeration, we thought for sure Bollywood movies would be popular here.

However, less than 17% of Malaysians listed Bollywood as one of their favourite genres (in fact 27% listed it as their least favourite genre), versus more than 27% preferring… Thai movies. To be honest, there have been some amazing Thai movies lately, like Bad Genius, and of course horror staples like Siam Square.

Aside from that, it’s little surprise that Korean and Japanese movies are immensely popular here, and not just with youngsters either, although Cantonese and Malay movies are still ahead. 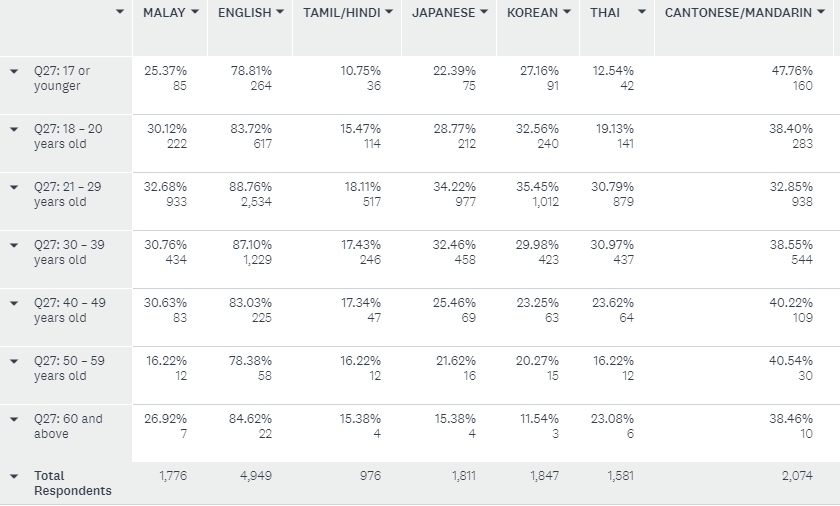 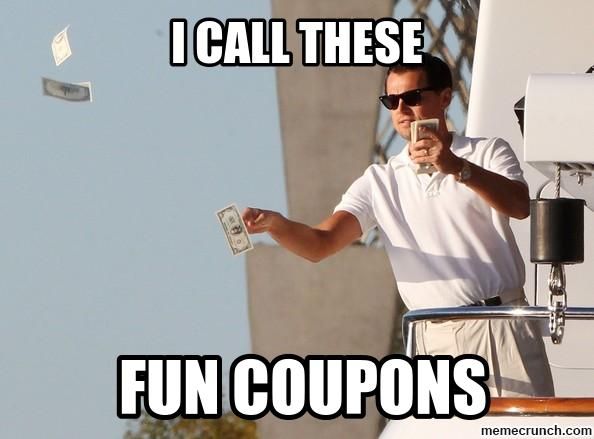 One of the questions we asked was “Would you take TWIN SEATS on a first date?“. If you didn’t know already, many cinemas including GSC have the option of TWIN Seats, with a removable arm-rest in the middle (or sometimes no arm-rest at all), to facilitate er… closeness.

Overall, Malaysians are quite conservative, with 63% of them option NO, of which 22.2% indicating it’s just too much pressure for a first date. However, for the ones who earn more than RM15,000 a month? Well, they don’t feel the pressure quite as much. Almost HALF (47.2%) of the atas crowd would say YES to TWIN seats at a first date, with those earning more than RM50k, that figure goes up to 55%! 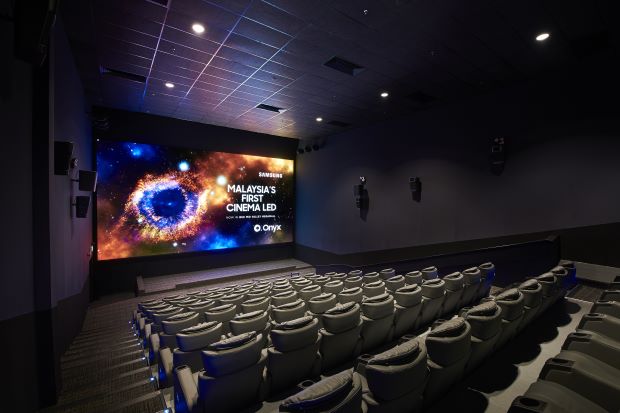 Also, these guys are much more likely to shell out for the bigger screens as well like GSC MAXX (which is Malaysia’s biggest screen btw), or ONYX (Malaysia’s first LED big-screen)because why not? Oh and another random stat, 52.6% of CILISOS staff are single. *hint*hint*

Oh yea, and if you AREN’T in this category (and since a lot of Malaysians have been feeling the pinch lately, check out GSC’s new Sayangi Malaysia promo 🙂 5. Most Malaysians have never been to a film festival… but they want to Surprisingly even for a movie survey, the majority of respondents (67%) watch movies once a month or less. So if you did go to cinema only once a month, you’d probably be watching the movies everyone else is watching. Unfortunately, that leaves less room for film festivals and indie films, with 72.7% of respondents saying they don’t have the time. 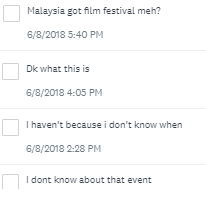 Some of the comments we received about film festivals

However, what’s interesting is that only 13.1% mention that it’s because they think the films are boring. Many Malaysians simply aren’t aware of film festivals, as indicated in the comments.

Actually, GSC has been hosting film festivals for nearly 20 years, with loads of new foreign films every month! What’s the next one? VIETNAM!

We’ve actually got 50 FREE GSC TICKETS for the Vietnam Film Festival to give away, so if you’re interested, head on to our Facebook and grab em NOW!

However, despite 95% of Malaysians spending less than 30 minutes in the cinema (not including the movie running time la), many of them indicated they would be open to new experiences. 72.8% would love VR experiences, while 62.9% would want to attend related exhibitions (e.g. Dinosaurs for Jurassic World), and 43.6% for live music performances!

6. And Malaysians smuggle ALL KINDS of food in, even ayam percik #kisahbenar

So if we know ONE THING about Malaysians, is that we’ll always bend the rules a bit. But we were quite surprised that so many of our respondents have smuggled things into the cinema. We purposely put some weird extreme stuff on this survey question, and boy oh boy, you Malaysians didn’t disappoint.

Yes. CHAP FAN ALSO GOT BRING OMG! But what’s most surprising is that we didn’t even scratch the surface with our choices. 41.35% of Malaysians smuggled things that weren’t even in this list!

OK la… gg.com. GSC obviously can’t provide ALL these items, although they do have their own brand of gourmet chocolates called Cocoatelier, and some seriously yummy gourmet burgers. They’ve got some pretty interesting flavours (like Ultraman and Hangover), but we’ll let you know when they add egg oyster, mee bandung and ABC (WTF) onto the menu. While it’s generally believed that women pee more than men, the reality seems to be the opposite. Most Malaysians (92.4%) don’t pee during the movie, but among those that do, 8.67% are men, while only 6.67% are women. And for the rare cases of those who need to pee MORE than 4 times during a movie? We had only 1 woman out of 2520 female respondents, and 8 men out of 3125 respondents. Yes, we reckon ugaiz should see a doctor about that.

While most Malaysians like to sit in the middle of the cinema, women have a slight preference for the back seats (more privacy). They also prefer dinner time shows (6-9pm) while men seem to like midnight screeners. Also,those darn kids below 20 are the ones watching movies during the afternoon, while most other Malaysians generally have to… y’know… work for a living.

8. When you hear someone going “SHHHH!”, it’s most likely an aunty or uncle

Surprisingly, only 15.6% of respondents under 21 would ask someone to stop talking during a movie, versus 31.7% of those over 40. So if you’re one of those annoying people who like to chit chat in a cinema, best make sure you check to see how old the person behind you is. And some of these otais from the Malay audience actually had some hilarious responses to people talking during the movie.

The same goes if there’s a technical issue, 75% of under-20s would just tahan until the end of the movie, while those above 30 are twice as likely to call an attendant or shout at the projectionist guy. BTW, in modern cinemas, there’s no point shouting at the projectionist because quite often, there IS no projectionist!

“Actually, we wouldn’t recommend anyone to shout for the projectionist. The glass window at the top is really thick and our projectionists can’t hear you! That’s why we’ve installed a new helpline phone at our cinemas, which are located outside the hall, so if there’s ever a need to ask for assistance – just make a call and we’ll be right there.” -Sharmine Ishak, GSC PR and Branding Manager

Also, further props to GSC, one of the respondents (not from GSC. We checked!) actually said this…

9. But AFTER the movie, some Malaysian youngsters just won’t shut up 4.2% of youngsters below 20 are the horrible people that post spoilers for movies online. That’s twice as likely than people in the older age groups. Despite being passive about technical problems during the movie, 3.5% of them are also likely to complain AFTER the movie on social media (twice the rate of dewasa).

Aiyo. Just FYI guys, even Instastorying is illegal. Even a 5-second clip can land you 5 years jail and/or up to RM100,000 in fines.

10. But overall, Malaysian cinema-goers are quite nice la 🙂 Almost half of Malaysians would report someone who is videoing the movie, while 75% would absolutely not take a call inside the cinema. Having said that, the ways in which they react to incoming calls are different. Men are a lot less concerned, preferring to just cancel the calls, while women prefer to message the person and tell them they’re in the cinema. Having said that, 15.5% of Malaysians would still pick up the call and tell them “IM IN THE CINEMA!”. Kinda hard when you have to be louder than sound systems these days like Dolby Atmos and or getting thrown off one of those fancy new D-Box seats.

Also, one option we forgot to include was people who basically turn their entire phones off, or don’t even realise their phones are ringing 🙂 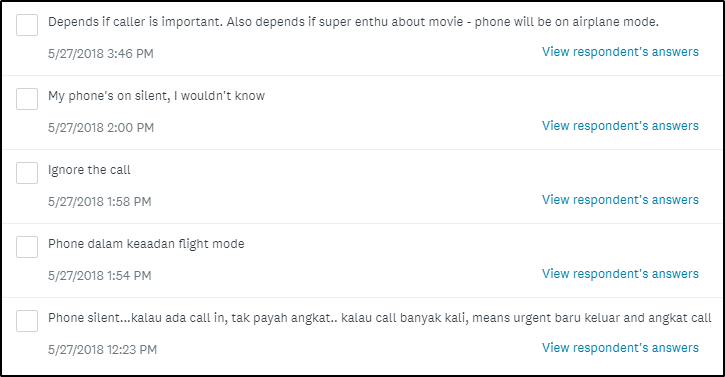 So, we hope you know the people sitting next to you better now 🙂 Well, we hoped you enjoyed reading that survey as much as we enjoyed putting it together. At the end of the day, one thing that we’ve come to realise about cinemas is that it takes the cooperation of everyone to make it a truly amazing experience – and you’re always gonna be nicer to people you know 🙂

Thanks once again to Golden Screen Cinemas for working with us on this survey, and do pay them a visit if you have the chance. They’ve got 36 branches, including a crazy new branch in Paradigm Johor, with movie lounges, and 4DX!

And since every movie these days has a post-credit sequence, we decided to include this picture of our staffer, Jo-Lyn, which the BM team took for their survey, but despite our best efforts, we couldn’t figure out how to put in this article.