Recently, there’s been some news reporting Malaysian citizens who are thinking of spoiling their votes or not voting entirely for the upcoming General Election. This has created very polarizing responses from social media, with some supporting the move claiming “neither party deserves my vote”, while others are saying that “you’re just helping maintain the status quo”. Of course, CILISOS dun wanna get into which party better than which party (cos we sure kena flame). So we thought we’d take a closer look at what spoiling your vote (or not voting) means, and how it might affect the outcome of GE14.

How many votes were spoilt in GE13? 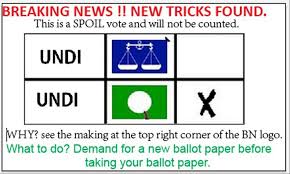 One of the pictures circulating WhatsApp during GE13 about spoilt votes. We have not verified if this qualifies as spoilt.

Unfortunately, SPR seems to have removed the detailed results of the 2013 Malaysian election (if anyone finds a working link let us know). Thankfully, the wikipedia on GE13 results is damn champion. We copy pasted the data into an Excel Sheet (feel free to use it), and took a closer look.

In the tightly contested 2013 election, we had 13,547,549 eligible voters, of which a relatively low 15% didn’t turn up (in the US, 40% absence is considered low adi, although Australia is like 5% oni). However, these 2,086,083 absent voters could easily have turned the entire election around for a 100% win for either party if they all voted. It was widely reported that, Pakatan had won the popular vote, by 3.8%. However, BN retained almost 60% of Parliamentary seats. Some conspiracy theorists (like CILISOS) say this is because BN can control the Election commission who decides who votes where. But that’s a story for another day.

As for spoilt votes, the total number was quite significant as well, at 178,739, with spoilage rates ranging from 0.4% to 2.6%, with urban areas generally having lower spoilage rates. However, if we take ALL the constituencies with higher than 2.0% spoilage rate, you’ll notice that they ALL were eventually won by BN component parties.

Many people were quick to point a smudged finger at the indelible ink, introduced in 2013 – a step by SPR to prevent people from voting twice. However, a quick look at GE12 results from 2008 indicate much HIGHER rates of spoilages (up to 7% for Cameron Highlands!), so indelible ink introduced in 2013 probably wasn’t the reason.

Yea, they even made a shirt out of it.

Keep in mind that SPR is probably a bit stricter than in Scotland, where a ballot paper that was allegedly marked “Good Guy” on one candidate, and “W*NK” on all the others, was discussed at the council and deemed legit!

So what’s the best way to show your dissatisfaction for GE14?

In simple terms, there are two ways to not-vote for a party – either you submit a spoilt vote, or you just don’t turn up to vote at all. Some people view voting for independents as a form of protest as well. How? Vote for someone ridiculous… like Lord Buckethead (no seriously), so you can force the PM you hate, to stand on the same stage and clap for them.

This does however, highlight an important point – the difference between spoiling or voting for someone independent, versus not going to vote at all. If you don’t vote at all, then there isn’t really much of a registered protest. However, if you spoil your vote, it does become part of record, and you’re registering your protest at the choices available.

The practice of spoiling votes as a protest seems to be mostly in developed countries, with other countries like Kenya unfortunately having other reasons for a high number of spoilt votes – like not knowing how, because the ruling government isn’t paying for voter education.

In Malaysia, there are a variety of reasons why people spoil or abstain from voting. For some in UMNO, it’s to protest their particular party chief not being chosen to stand for a position, and as a better/safer alternative to voting for the opposition. However, this has still resulted in significant losses, according to the Iron Lady herself.

“In some constituencies, the number of spoilt votes was bigger than the winning majority obtained by Barisan’s opponents. It was clear that the spoilt votes were cast by Barisan members as a sign of protest (against the chosen candidate),” – Rafidah Aziz, former Wanita UMNO chief, to MalayMailOnline

For urbanites, it’s to show their displeasure to both parties, or to indicate a lack of trust that either can effectively run the country.

NAH, BACA:
5 most epic Malaysian queues of all time

The battle for Malaysian urbanites – what’s a spoilt/abstained vote likely to achieve? As we mentioned before, spoilage rates for GE13 ranged between only 0.4%-2.0% in the last election, indicating that procedures have improved, and that a vast majority of Malaysians did not spoil their votes. However, the coming election is a very different animal – the optimism given to the opposition has waned significantly, while Najib is setting its eyes on the urban areas it lost in the last election, even trying to bring some of Selangor’s opposition MPs over. At the same time, some funny things are going on at the EC (SPR), with voters finding their voting statuses revoked.

So let’s take a look at the likely outcomes of spoilage votes.

1-5% spoilage – There were 47 seats that were won with less than 5% majorities, so at this level of spoilage, these are the seats in danger. Of these seats, 33 went to BN and 14 went to the opposition in GE13.  For Selangor urbanites, they’re unlikely to affect the overall vote, with urbanites choosing opposition in droves. In KL, areas that might be in danger include Bangsarians in Lembah Pantai (which Nurul Izzah won by a mere 3% or 1847 votes (probably less people than would read this article), and places like Setiawangsa and Titiwangsa. For BN, areas like Bentong would be very closely fought, with MCA current president Liow Tiong Lai, winning by a mere 379 votes (less than 1%) in GE13.

6-10% spoilage – This is about the highest rate of spoilage you could realistically expect, and it would result in deciding 73 seats, of which 48 went to BN, and 27 to the opposition. In the UK, this would be considered “newsworthy”, and thus be a worthwhile protest.

11%- above spoilage – This level of spoilage would make it difficult to predict anything, since it’s hard to predict margins of over 10%. It’s interesting to note that Pakatan has alot more big-margin states, thanks to its success in urban areas in the last election. Also interesting, but probably impossible is for spoiled votes to take up more than 80% of the votes, because a candidate with less than 1/8th of the total votes is not eligible. We tried researching, but couldn’t find what happens if no candidates are eligible (!).

So should you spoil your vote ONOT?

It’s important to realise that a spoilt vote can have very real consequences. If everyone who reads this article spoilt their vote, they could swing the election of the state of Selangor in either way. Particularly in the youth segment, where the spoilt vote conversation is happening, research organisation Merdeka Centre are predicting drops of 5-8% in youth voters. So the best way to look at it is to ask yourself WHY you want to spoil your vote. 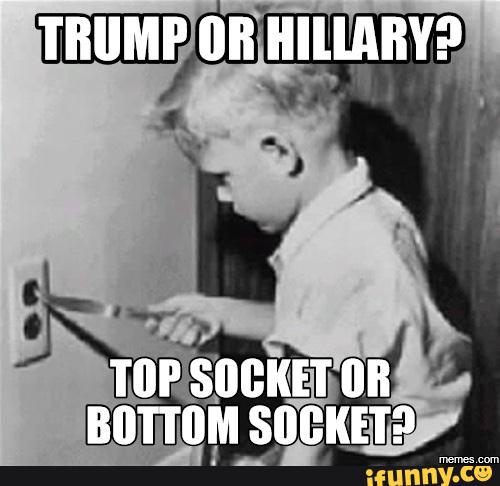 We’re not the only ones who are ‘spoilt’ for choice

“I want to tell both parties they suck” – If this is your objective, then it is better to cast a spoilt vote that will register, rather than abstaining entirely, which doesn’t send any message at all. Better still if all the spoilt votes carry the same message. Much of the social media talk about spoiling or abstaining was related to recent dissatisfaction with the Opposition. The logical effect of this would be that if you previously voted Opposition, then BN would gain from your non-vote. If you voted BN, then the Opposition would gain instead.

“I want to voice my general dissatisfaction and make a change in my country” – Yes, a spoilt vote is a protest of the status quo – however, it’s important to note that the status quo is that Malaysia now holds the record of having the longest serving ruling party in the world, so if you submit a spoilt vote or abstain entirely, then the status quo is more likely to continue than not. This is different in other countries with an established two-party system, where a protest vote is more likely to have an effect.

“Protesting by not voting is dumb, because it’s an invisible protest that changes nothing,” – Tharma Pillai, VP of Malaysian Students Global Alliance, MalayMailOnline

Our kids at TahanUni covered Tharma’s initiative, named Undi18, which aims to lower the minimum voting age from 21 to 18. But rather than get new voters, do remember that more than 2 million Malaysians didn’t vote in the last election, and could’ve easily swung the election either way. So which way are you going to go?