Last week in Malaysia, the hot areas became cold, and the cold places got colder. While many parts of Malaysia were registering temperatures as low as 21°C, temperatures in Genting dropped as low as 14°C! But the cold “European” weather was not the only thing cold casted on the famous highlands.

For a few years now, the relationships in one of Malaysia’s most famous billionaire household have become colder, in light of the disputes and allegations being thrown at each other regarding family inheritance. You might have read about it before, one Lim or suing another Lim, but the case has actually gone on so long that it’s actually making investors worry (OH the poor investors).

But more than the billions of ringgit at stake, the in-fighting could result in a shift of power in the Genting kingdom, as its the shareholding of companies that is in dispute. And with great shareholding, comes great power and control. 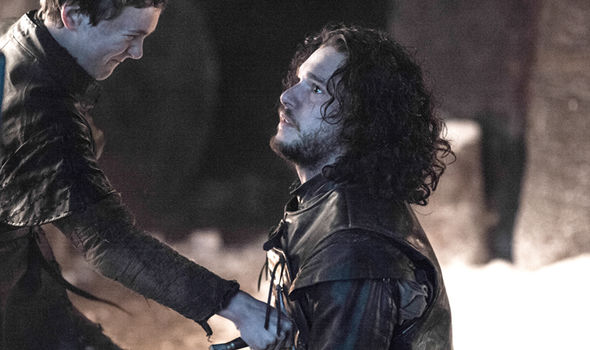 Power struggles are mostly fought with money and in courts now. Image from express.co.uk

So for the love of having Starbucks in cold weather and amusement park roller coasters, what’s going on with the Genting overlords? And would this affect Genting?! Read on and tell us what you think will happen in this season of Genting family feud!

Before we get to that, here are some facts surrounding the whole plot

Genting was founded by Tan Sri Lim Goh Tong, a Malaysian visionary who decided that it would be a good idea to build a casino/resort/ on top of some mountains. But before he got to do that, he was just another Chinese immigrant who came to Malaysia in search for a better life. After several odd jobs (and surviving the Japanese Occupation), he ended up trading secondhand heavy machinery, which opened a path for him to construction.

He had much success there, and after several successful large scale construction projects such as the Ayer Itam dam and the Sultan Yahya Putra Bridge, he finally earned enough reputation and expertise to consider the construction of Genting, which was an idea that came to him when he was having dinner in Cameron Highlands. Today, the Genting group is a multinational company, with an estimated worth of RM135 billion.

By his side all this while, was his wife, Puan Sri Lee Kim Hua, and they had a total of 6 children together: For the story at hand, his 2 daughters on the far right: Siew Lay and Siew Lian will not play any role. While Lim Goh Tong and Puan Sri Lee Kim Hua are only cameos. The 3 other main characters not included in the family tree are the 3 children of Lim Tee Keong:

The triggering point began with Lim Tee Keong (Lim Goh Tong’s eldest son) who died of cancer on April 14, 2014. Prior to his death, he actually had to declare bankruptcy due to failing to repay more than RM200 million worth of debts to 2 stockbroking companies.

Lim Goh Tong had actually created an inheritance system based on separate trust entities for each of his children and their families. But because of the bankruptcy, Lim Goh Tong had to transfer the ownership of Tee Keong’s trust to his younger brothers, Lim Chee Wah and Lim Kok Thay. Lim Goh Tong died on October 23rd 2007, and as for Tee Keong, the trust ownership was never reverted and he died a bankrupted man.

One last thing to know is that the ownership of Genting is distributed in a complicated web of… finance stuff. One company holds stakes in another company, but its also being held by another company so on and so forth. This fact is important, but the details doesn’t really matter to the story. You can take a look if you want: 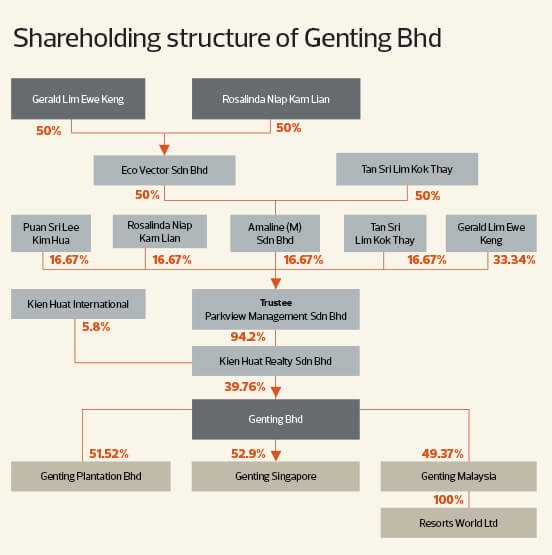 What a modern empire looks like. Inforgraph from the edge markets, October 30th 2017.

The stage is set, now we can move on to the feud… all FOUR of the feuds

If you thought there was only one problem going on, you have been severely mistaken. There are actually 4 known and on-going legal proceedings surrounding the Lim kingdom: A power of attorney is the rights given to another person to act on the giver’s behalf. When Lee Kim Hua passed away on 25th August 2017, her thumb-printed POA was allegedly transferred to her two surviving sons, Lim Chee Wah and Lim Kok Thay, and authorised for a token sum RM10 (a symbolic amount of money to make the transfer official).

But the son of the late Lim Tee Keong, Benjamin Lim Keong Hoe believes that the POA is suspicious. He claimed that his uncles created the POA to gain custody over his father’s family trust, because his late grandmother suffered from a stroke (causing mobility issues presumably)!! And the POA does not even bear her signature!!!

NAH, BACA:
Workers in today's Malaysia have less power than we did back then. Here's how it happened.

Feud 2: Lee Tee Keong’s final will gave almost everything… to his mistress?! According to Tee Keong’s final will, both his sons Joey and Benjamin Lim were to be excluded from any entitlement to his inheritance. Tee Keong’s wife Agnes Tan Bee Gaik, and daugther Seok Leng were given 20% interest, while the remaining 80% actually went to… the son and daughter he fathered with his mistress (gasp).

Joey and Benjamin Lim is challenging the validity of this will, because they believed that it had been made in a suspicious manner (it was made less than a month before their father’s death). The fact that their uncles Chee Wah and Kok Thay were made the sole trustees of the will did not help elevate their suspicion either (double gasp).

Feud 3: The removal of ALL of Tee Keong’s children from the family’s trust As we mentioned before, each of Lim Goh Tong’s children and their family has a separate trust entity under their name. Tee Keong’s trust was transferred to his brothers, because of his bankruptcy. As Tee Keong’s 3 children found out (on different occasions) later, their names have been removed from the trust, meaning that they are no longer eligible to any inheritance that comes with it.

Joey, and Benjamin, and this time with their sister Lim Seok Ling, are suing Infoline, the company acting as the trustee of their family trust, where their uncle Chee Wah is also the director (the tlot phickens!!). The final case is between Lim Kok Thay and his sister, Lim Siew Kim. The fight is surrounding 796,250 shares which were set aside by Lim Goh Tong for Siew Kim, but were held by Kien Huat Realty (one of the companies in the Lim family empire), which is (you’ve probably guessed by now) chaired by her brother Lim Kok Thay.

Siew Kim says that the shares were still entitled to her, because she had not sign any agreement to transfer ownership to Kien Huat Realty. On the other hand, Kien Huat Realty insisted that she had sold it to them, and they had even agreed to her amending the selling price from RM2.13 million to RM3.20 million. As a result of Siew Kim’s lawsuit, Kok Thay counter sued her (bet you didn’t see that coming!) for RM32 million.

Haiyo rich people problem la! But there are lessons here for us all

The court proceedings have become quite a hot topic for the business people, because the outcome of these cases could challenge Lim Kok Thay’s control over the Genting group, who is currently the Genting chairman and chief executive. But according to Malaysian financial adviser LCF on Personal Finance, there are apparently important lessons to be learned from this, even for people who aren’t worth billions of ringgit. There are plenty of examples of what NOT to do with your will or when passing on your fortune, for example:

“If you are to exclude any rightful beneficiaries, such as legitimate children & spouse from your will, always state the reason you are doing so.” – quoted from LCF on Personal Finance 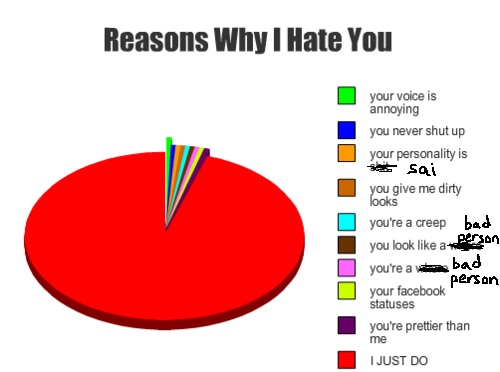 They didn’t say you can’t have a pie chart.

Stating your reason might help overturn any arguments that the affected members might come up with. Another thing we didn’t mention was that Tee Keong’s will was drafted and witnessed by lawyers working with Genting group for many years. A partner in the law firm is also a board member of Kien Huat Realty… which is becoming a predictable plot twist by now.

“When dispute happen, people are going to dig into every shit, even remote ones and link it back to you. Why provide bullets for such dispute to happen, even if you are right in the first place?” – quoted from LCF on Personal Finance

So if you scared your cucu-cicit hentam each other and waste money fighting over your hard earned inheritance, better engage lawyers that you’ve never dealt with before, and lay out your reasons and intentions clearly. For his compete insights, you can read LCF’s analysis of the whole issue here.

So there you have it, maybe someday this can turn into a Malaysian movie?

And the final showdown will be a good old high stakes poker game. Image from God of Gamblers.

Insiders and people involved have remained tight lipped over the whole issue, partly due to fear of being cut off from future business opportunities. But whatever the outcome may be, it probably won’t affect usual Genting goers, and we’ll still have our Starbucks and theme parks. But remember kids, legal proceedings are a lengthy and expensive affair, so if you don’t want to get tangled in a magistrate mess, best consider your will clearly and lay it out properly.

Anyway, maybe at the end of all this, the surrounding fascination might inspire an original Malaysian series or movie about the high rolling life of Malaysian billionaires, maybe even adding a love interest angle, Mat Rempits, and perhaps some pontianaks.