As GE14 approaches, blood pressures are rising, the politricks are getting meaner, and you could cut the tension with a blunt marshmallow.

Barisan Nasional’s candidate for PM is Najib Razak, no surprises there. But what about Pakatan Harapan’s candidate since Anwar is in jail? He is due to be released 8 June, but that won’t be in time for the General Elections, which has to be called 60 days before the parliamentary term expires on 26 June.

As some of you may have read, Pakatan has put forward Dr. Mahathir as candidate for PM, while PKR President Dr Wan Azizah Wan Ismail has been designated the Deputy PM candidate. In black and white. Img from Malaysiakini

Not everyone is a-ok with the idea of having Dr M as PM again… but the objection is not only coming from the Federal Government.

Selangor PKR thinks it’s strange that Pakatan Harapan did not name its PM-elect from PKR. Actually they had someone else in mind, and he is none other than Azmin Ali. Communications Head Hizwan Ahmad said that with the party’s track record in governing Selangor, whose Mentri Besar is PKR Deputy President Azmin Ali, they would rather see Azmin leading the country.

“The Selangor government is proof that PKR can bring about change in the administration, championing peace and prosperity. We find it odd that despite our long fight together and our proven extraordinary records, the party was unable to select our own leader as the Prime Minister candidate.” – Hizwan, Malay Mail

This sentiment is shared by several Pakatan Harapan women leaders and a few young activists. Describing the decision as hastily-made, Melaka PH women’s wing chief Mahani Masban hopes the coalition’s top leadership will review their decision. They feel that someone young and fresh like Azmin would have been more suitable based on the current political landscape, and would be the one to steer the country into a new era.

So far, we haven’t come across Azmin’s opinion on the PM candidacy. Some would prefer Azmin as PM. Img from Malay Mail

While this may make sense to some people, we’d like to highlight another issue – based on the latest statistics, about 45% of Malaysians are young people, said the Electoral Commission, but the youth are not interested to vote. About 4 million of them have not registered to vote as of March 2017, according to the EC’s figures. Most of them are 21-year-olds. 🙁

Anyway, coming back to Dr M, women’s chief Mahani called for calm among party members and accept the outcome. Likewise Selangor PKR said though they’re not lovin’ it, they still respected Pakatan’s decision and would continue to fight hard in the elections. So the biggest resistance is not coming from these guys, but… 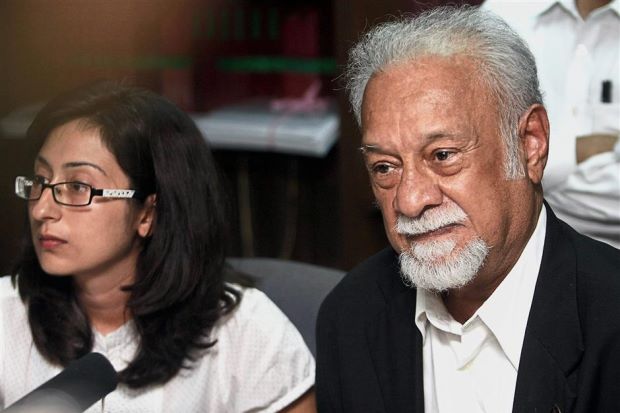 Sangeet with her dad Karpal. Img from The Star

The late Karpal Singh’s daughter Sangeet Kaur Deo has some reservations about choosing Dr M. In fact, she doubts her dad would have agreed to it either, and took to Facebook to disagree.

“While it may be an act in desperation, as was our coalition with PAS at one point, will we be open to working with Najib (Prime Minister Najib Razak) one day, should desperate circumstances demand?” – Sangeet, FMT

Sangeet said if the opposition has “no one else” to choose to be PM, it shows a lack of long-term strategy. She suggests they focus on policies and principles, not personalities. Additionally, she worries that installing Dr M would mean a return of ‘Mahathirism’. What’s that? It means a lot of things to different people – some have put forward racism, patriotism and authoritarianism to describe it. You’re probably better off reading an books about the man himself, only RM59.90 at MPH. 😉

Sangeet adds this isn’t a matter of forgiveness, rather it is about accountability.. that public persons should be held accountable for their actions.

Her brother Gobind Singh Deo, DAP’s National Deputy Chairperson, does not share her views though. Malaysiakini reported that Gobind had explained PH’s justification for choosing Mahathir to Sangeet. The majority of DAP leaders have already agreed to the plan to install Mahathir, Lim Guan Eng revealed, with the exception of maybe one or two people, however the party’s position will be determined by the majority. Those from Federal Government also threw in their 2 cents, with Deputy PM Zahid Hamidi sarcastically congratulating Pakatan Harapan first, then he said they risked recycling the same mistakes:

“The resolution is very good and well-placed. The leader has done a lot for the country for 22 years. If he is given the chance again, the past mistakes made before will be repeated again.” – Zahid Hamidi, Malay Mail Online

“After a lot of expectations thinking the reforms are coming… what reforms are you (Opposition) talking about if you name a 93-year-old man whose friend was kicked out from Zimbabwe last year … and we proudly announce that if (opposition) wins the election the Prime Minister will be Dr Mahathir. It is ridiculous, a stupid act and regressive.” – Nazri, The Sun Daily

“Now, he is your boss. Life is sure cruel sometimes.” – S Vell Paari, MIC Treasurer, FMT Not a lot of people can sit still for five hours straight, but when it’s a meeting to decide who will become the country’s next leader, that room full of people better down Red Bull and pay full attention. So after a five-hour meeting at Bersatu’s HQ in Petaling Jaya, Pakatan Harapan leaders emerged smiling, having made their choice.

“Everything has been resolved. Everything will be announced tomorrow.” – Mohamad Sabu, Amanah President, Malaysiakini

“Look at my smile. I am happy (because) it’s all done.” – Rafizi Ramli, PKR Vice President, Malaysiakini

So on 7 Jan, the coalition made it official. Even Anwar has given consent, his daughter Nurul Izzah confirmed. In fact, Bersatu, DAP and Amanah were prepared to endorse Mahathir, but initially PKR was like ermm. But then afterwards they relented when they secured the word about Anwar’s release. Should Harapan form the new Federal Government, they will immediately seek the royal pardon. Read our article on the royal pardon

On his part, Dr M admitted it wasn’t easy taking the first step to say, ‘let’s work together’, with those who were once hostile towards him, and he understood that they struggled with it as well. But to him, it was important to “move forward”, his own words. So, he… apologised.

“I, like other human beings, am not alone in saying and doing wrong. Not just today but for all the time that I have been involved in politics. I apologise for all the wrongs that I have done.” – Dr M, quoted from The Malaysian Insight

Wow. You thought you’d live to see dodo birds make a comeback before Malaysia gets to hear an apology from the former-now-contesting PM. Until he comes up and says, “I am a Malay. It is Malay custom to apologise often because we don’t know where we might have done wrong. That’s customary, and as a Malay we should be humble. After we speak or done something, we apologise because there is the possibility that what we did is wrong in somebody’s opinion. That is all.” Wow.

Well, perhaps Dr M may not be to everyone’s taste, but Pakatan Harapan has made a decision it believes to be the best.

Dah. Done and dusted. See you at the polling station!