If you’ve seen that one Marvel movie Thor from 2011, you may remember that one scene where this lady just straight up used a stun gun on the god of thunder himself and sent him to a hospital, because that’s what you do when you encounter a stranger who seems dangerous.

But if you’ve never seen Thor, let us just explain it briefly for you. A stun gun is…well, not a gun. It’s basically a weapon or device that uses high voltage electricity to take down your opponents, and it’s usually shaped like a gun. Basically, when you use a stun gun on someone, your victim will end up immobilized, and there’s usually no permanent side effects on them. Some people would call it a TASER, but TASER’s only a brand of stun guns, so we’re just gonna call it a stun gun for the rest of this article.

Usually, a stun gun’s considered a self-defense weapon, often for women. Now, you’d probably think that since it’s for self defense, a lot of people would be using stun guns on the streets. But that’s not the case in Malaysia. In fact… If you’re in any way familiar with the gun laws in Malaysia, you will know that we have pretty strict gun laws, where literally no one but the cops and military is allowed to carry a firearm unless they’re licensed. Just in case you’re interested in the guns business but you’re too lazy to get a permit, here’s what you have to look forward to:

But you probably didn’t know that stun guns are actually illegal too! Well, according to the Corrosive and Explosive Substances and Offensive Weapons Act 1958 anyway. Under the Second Schedule, the Act clearly stipulates that any device or equipment that are “operated by battery or electricity or any form of power” are things that a common citizen cannot just carry around on the streets, such as stun guns and control clubs. Other objects that can be considered weapons that we can’t just carry around on the streets are knives, parangs, knuckledusters, and crossbows etc.

From what we understand, apart from the popo and local governmental agencies, licensed security companies are also allowed to wield stun guns, which is stipulated under the Private Agencies Act 1971. For a common citizen, on the other hand, you’re gonna have to get yourself a stun gun carry and use license to be able to legally own one.

But why are stun guns such a big deal that there’s actually a by-law outlining that it’s illegal? Well, just because it doesn’t necessarily kill, it’s also a pretty dangerous weapon. To start with, there’s too large a variety of stun guns available to ever be certain of the range or power a stun gun contains – there are even times when stun guns have proven to be too powerful to actually kill people.

Not surprising that kids can get their hands on stun guns since their gun control is kinda…meh. GIF from Gfycat

For example, in 2012, human rights NGO Amnesty International found that that there were 500 deaths related to stun gun use in the US alone!

“Field experience with CED use indicates that short-term exposure is safe in the vast majority of cases. The risk of death in a CED-related use-of-force incident is less than 0.25 percent.” – US Department of Justice, as quoted from Malaysiakini

In addition, there’s also the concern that, um, bad people may get their hands on stun guns to carry out illicit activities if stun guns are made easily available on the market. Because, you know, what if a robber comes into your house and decides to electrocute you and your family to make things easier for themselves?

“It might be tempting to keep one at home or in the car, but I think we don’t need this kind of things to be the norm in Malaysia.” – Former Penang Crime Prevention Foundation vice-chairman Lee Lam Thye, as quoted from The Star

So, you know, that’s why stun guns are still illegal in Malaysia until today. But – STUN STUN STUNNN…

NAH, BACA:
What can the extended MCO mean for your salaries? We ask some bosses.

It’s really easy to buy a stun gun in Malaysia

Don’t get too excited. GIF from Gfycat

Despite the illegality of stun guns in general, one can still easily find and even purchase a stun gun if they know where to look. For example, you can find a stun gun seller on online shopping platforms. News portal The Star even tried to get a stun gun on Facebook, and within fifteen minutes, they were able to get it.

However, when we ourselves tried to look for these stun gun sellers on Facebook, we couldn’t really find them. Instead, what we found was a series of stun guns and similar products on an array of online platforms like Shopee, Ubuy, and Lelong.my. But of course, since it’s, ya know, haram, we didn’t actually buy these products, because we don’t wanna kena lokap, please. What was kinda stunning though was that a lot of these sellers were listed as local sellers, rather than international shops, which only meant that there are actually local Malaysians brave enough to defy the laws and stock up on these weapons.

Apart from online platforms, it’s been said that you can easily buy a stun gun at a local pasar malam or even an electronic shop – again, if you know how to find them. And we found that some even sell them at RM10 per piece!

Wait, but how did these things get past customs so easily? Well, importers have reportedly been declaring stun guns as torches or flashlights to get past customs for years. This is because that a lot of stun guns come with LED lights that make them look like flashlights, which may have made it easier for them to be waved aside.

“There are hundreds of containers coming into Malaysia every day and it is not humanly possible for Customs officers to inspect every single item in every container.” – Anonymous importer, as quoted from Straits Times

If there’s anything to be said about this, it’s that people will always be able to find another way out when they’ve reached a dead end – and in this case, the people found another way around the ban on stun gun possession in Malaysia. However, as we’ve said before, while the rakyat may be banned from using stun guns, the authorities aren’t, which is why…

If the shootings in the US in the past few years haven’t given you enough warning, guns are dangerous and guns can very easily kill, whether intentionally or not. Malaysia itself has had quite a few shooting incidents in the past few years, with the latest one involving three gang members getting shot by the police in Rawang last year.

As a result, the Inspector-General of Police (IGP) Abdul Hamid Bador’s recently announced that they’re considering letting the police use stun guns, instead of actual guns, to enforce the laws. This is so they can reduce the use of firearms when confronting aggressive or careless people so as to avoid accidental killings.

“The police do not want to shoot anyone, and want to resolve issues without loss of life such as when dealing with persons under the influence of drugs who will be aggressive.” – Hamid, as quoted from FMT 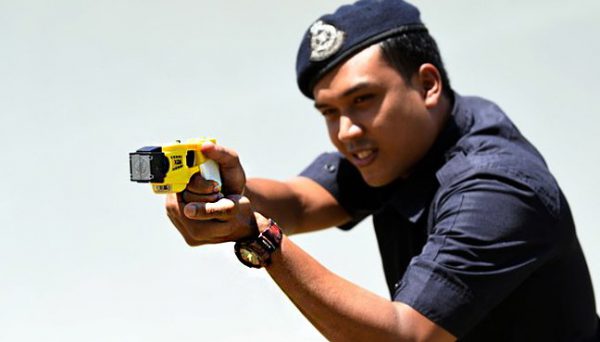 It’s not exactly the first time that the police has talked about replacing firearms with stun guns, but the last few times haven’t exactly panned out either, so we can’t be too sure about this time as well. However, Hamid seems to mean business, given that he’s also mentioned acquiring stun guns like those used by the cops in the US, as the ones we have are apparently “of poor quality“.

As for the rakyat, it doesn’t seem that the government will be making it legal for us to use stun guns anytime soon. If the police is actually replacing firearms with stun guns, we may even see a time when the police will be apprehending illegal stun gun sellers with stun guns themselves, which would be ironic.

So, you know, if you wanna feel a little more secure on the streets, you might wanna consider other avenues, like pepper sprays, which are totally legal as long as it’s for self defense. Just, uh, don’t go and risk getting a stun gun and accidentally electrocute yourself in the process.