In a reverse Thanos effort to save HALF A MILLION lives each year, the World Health Organisation (WHO) urged developing nations, like Malaysia, to follow the lead of affluent countries in eliminating man-made trans fatty acids from their food. Yep, trans fat kills 500,000 people annually! Every time you eat a karipap, a roti canai, you might be closer to becoming a statistic.

And just the other day, Bangkok Post reported that Thailand’s ban on artificial trans fats came into effect on Wednesday, 10th Jan 2019. This makes them the FIRST in the Asean to ban the production, import and sale of partially-hydrogenated oils along with other food that contain them.

WHO ambitiously hopes that all countries will ban it until trans fats totally pupus from the global food supply by 2023. However if countries get rid of trans fats, it could up the use of palm oil. Eyyy palm oil, that’s our speciality. As in that’s Malaysia’s. However, if governments adopt this measure, it could inadvertently ramp up the use of an environmentally destructive replacement—unsustainable palm oil.

But now by taking 6 specific steps, officials from the United Nations’ health agency said countries could reduce a tidal wave of heart disease and strokes which cause that number of deaths every year. Heart disease and stroke are top 2 killers in da world… and guess what, heart disease is indeed the no. 1 killer in Malaysia too. Think it’s probably about time to do something.

Wait, don’t tune out yet!

Trans fats is made from vegetable oil…mixed with HYDROGEN!!

No really, don’t run away. We often hear this word and see it on food labels, but what is trans fat? There are two types of trans fats found in foods – artificial trans fats and naturally-occurring ones. The latter is produced in the gut of some animals, and so, food made from them will contain small quantities (ie. meat and dairy products), but it’s negligible, unlike the former… the one we should really be worried about.

Artificial trans fats (or trans fatty acids) are actually just liquid vegetable fat/oil that have gone through the industrial process of adding hydrogen to make make them more solid. This increases the shelf life and the flavor stability of oils and foods that contain them. Trans fat is commonly found in margarine, shortening, baked goods, fried food (coz can keep re-frying), creamer and so on. Words to look out for on food labels are “partially hydrogenated oils”.

Trans fat is considered by many doctors to be the WORST type of fat. In the hierarchy of fats, polyunsaturated fats which are found in vegetables are the good kind, they lower your cholesterol. Saturated fats have been condemned as the bad kind. But trans fats are much more teruk. They wreak havoc with the body’s ability to regulate cholesterol. They both raises your LDL (bad) cholesterol and lowers your HDL (good) cholesterol. Double trouble!

According to a recent study of some 80,000 women, for every 5% increase in the amount of saturated fat a woman consumes, her risk of heart disease increases by 17%. But only a 2% increase in trans fats will increase her risk of heart disease by 93%! Additionally, trans fat increases the risk of type 2 diabetes, coz it can cause a resistance towards insulin.

“Trans fat is an unnecessary toxic chemical that kills, and there’s no reason people around the world should continue to be exposed to it.” – Dr. Tom Frieden, former Director of the US Centers for Disease Control and Prevention (CDC), Star2.com

We could always replace margarine with palm oil Other oils can also be used to replace trans fat

Instead of eating what doctors call the WORST type of fat and shortening (hah) our lives, there are plenty of substitutes we could use. Here are some being explored by the food industry:

Brands are already making the shift, with Wendy’s being among the first fast food restaurants to do so in 2006. They switched to a blend of non-hydrogenated corn and soy oil in 2006. Kellogg’s is using genetically engineered soybeans to create a product low in trans fat but high in taste and convenience, while Crisco offers shortening made from a combination of sunflower, soy, and cottonseed oil. McDonald’s is the latest to jump on the bandwagon, creating a blend of canola and soybean oil to be used in cooking up their famous fries.

What about average Malaysians? Well, we can eat home cooked meals if we wanted. We could use one of the substitutes above for frying, and we could switch to butter instead of margarine for bread spread. For people who would still prefer to stick to margarine, there are some made from palm oil, as the oil is naturally semi-solid at room temperature. Or opt for the softer tub margarine rather than the block ones.

It takes little effort to read the labels when grocery shopping. Just make sure it says ‘Trans Fat 0g’ and avoid buying items that have ‘partially hydrogenated’ or ‘hydrogenated vegetable oils’ or ‘saturated fat’. Choose the ones that use ‘unhydrogenated oil’ instead. 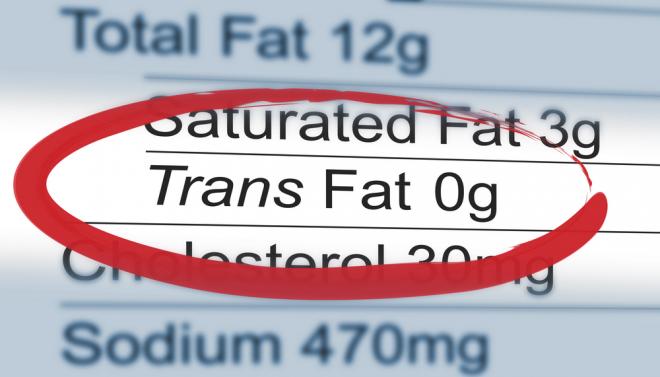 And then of course there’s good old fashioned self-control. Doctors always advise us to count our calories and eat in moderation anyway. We can start  by saying no to kuih time, junk food, fast food, Insta-yummy desserts, and boil our vegetables in plain water for meals every day or eat them directly from the ground.

It’s no wonder that so most developed countries have declared war against trans fat. Denmark was the first country to introduce laws strictly regulating the sale of many foods containing trans fats in March 2003, which effectively banned partially hydrogenated oils. This restriction is on the ingredients rather than the final products. This regulatory approach has made Denmark the only country in which it is possible to eat “far less” than 1g of industrially produced trans fats daily, even with a diet including prepared foods.

It is hypothesized that the Danish government’s efforts to decrease trans fat intake from 6g to 1g per day over 20 years is related to a 50% decrease in deaths from heart disease. Other countries have largely followed its model: Norway, Iceland, Hungary, Austria, Switzerland, Argentina and the US. Sweden and Canada have also adopted legislation, but has not yet implemented it. For Argentina, it is expected that the move that could save the government more than US$100 million a year on healthcare.

In the US, it began when some New York counties banned trans fats first, resulting in heart attacks and strokes falling by more than 6% in 3 years. A national ban on trans fats starts this year, where producers and restaurant chains, way ahead of the game, have been finding substitutes such as such as olive oil, canola oil and safflower oil. But the Food & Drug Administration’s ruling doesn’t include natural trans fat.

Products with higher levels of the oils are appearing on this Trans Fat Wall of Shame Pinterest board, curated by the Center for Science in the Public Interest. And here’s a clip of an episode of American Dad on the trans fat ban:

Even Singapore and Thailand are beginning to take the issue seriously. Singapore plans to limit trans fat to no more than 2g per 100g of food products sold at retail outlets. Thailand is right now in the midst of finalising its Public Health’s Draft Notification on the proposed ban.

In Malaysia, there is no law as yet to limit the amount of trans fat in food. Despite this, the Health Ministry has classified foodstuff as having low trans fat if its content does not exceed 1.5g per 100g. A very recent study concluded that food in Malaysia generally has low amounts of trans fat based on this guideline.

However, if the country wants to start getting serious on eliminating trans fats, WHO laid down 6 steps, called the REPLACE guidelines:

In any case palm oil is extensively used in Malaysian cooking. Palm oil is stable enough to prevent the formation of trans fat during food production.

In spite of this, fried food, especially fried chicken and food that uses margarine and ghee* (Ed’s note: There’s ghee made from dairy, and ghee made from vegetable oil. The latter contains 14-40% trans fat.), such as roti canai and those homemade business cakes, contain relatively high amount of trans fat. Oh man, should we stop eating roti canai then?