Poor Form 3 students! The new school year is starting today and while other kids are looking forward to a fresh start, the Form 3 students are haunted by bad PT3 results. There was a lot of disappointment because the number of students who scored straight A’s was lower compared to 2013’s PMR results. Awwww.

Pentaksiran Tingkatan 3 (PT3) replaces the Penilaian Menengah Rendah (PMR), but horror of horrors, was implemented NOT at the start of the year, but on March 31, 2014. Students, parents and teachers felt the change was too sudden and drastic. Some said the kids were used like as guinea pigs by the Education Ministry. They didn’t know what they were up against and didn’t know how to prep for the big day. One student described it like this:

“We were getting different exam formats even just a week before we sat for them.” – Puteh Majidah Ismail, Form 3 student, The Star 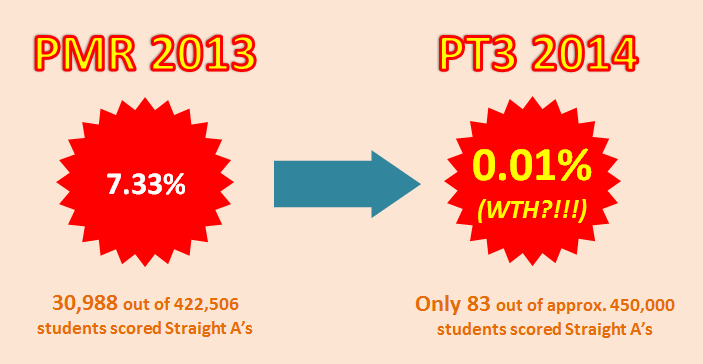 Source: PMR from The Star, PT3 from Malaysiakini

So what’s wrong with PT3? Are the changes better for the students or worse? Seeing as Malaysian students are very pressured to perform academically, we understand how disappointed they must be. But don’t worry, CILISOS comes up with a list of excuses students can tell their parents.

Instead of starting it in January itself, the Ministry announced at the end of March, that all Form 3 students would be sitting for the new PT3 format. But why did they waste 2 months of the students’ time, who started out with the old syllabus first? Why surprise attack them like that?! No this is not an actual photo of a PT3 announcement. Image from hykal fikri on Flickr.

Or they could’ve waited till January 2015? Then the old Form 2 students can be mentally prepared for the new format.

Serdang MP, Ong Kian Ming revealed that the Education Ministry had already known since Feb 2011 (some reports say 2005) that they were gonna abolish PMR and replace with a School-Based Assessment thing called PBS.

“But PT3 was only announced and confirmed in March 31, 2014, leaving very little time to brief the 63,000 Form 3 teachers in 2,376 secondary schools, as well as the students and parents about this change.” – Ong Kian Ming, Serdang MP, The Malay Mail Online And maybe if they 100% rock-solid confirmed it and drilled the students with the new format, things might have turned out better for them. But students were complaining about getting different formats right up to the week before the real deal, like Puteh Majidah Ismail told The Star.

This time, PT3 results were more ‘accurate and reliable‘ because students were graded based on a fixed marking system, as Noor Mala Hamzah, Principal of SMK Tengku Ampuan Jemaah explained. “Previously, students could get an A if they scored 75 marks but now, they must score 80 marks to get an A and it is fixed. There are students who got B for scoring 79 marks. It would have been an A if this was PMR.”

So probably the students could have gotten chun-er grades if PT3 was graded according to the old forgiving bell curve? Just an example k: A, B, C and D grades are unevenly distributed, so the probability of students getting A or C is higher because the range looks wider in the graph above.

Here’s the odd thing about the bell curve grading. Nowhere is it stated in the Education Ministry’s website that this is how they grade UPSR, PMR or SPM papers… other than general public perception that this is how we grade papers. Like this article written by Leanne Goh in The Star and the results on Google search. We just we’d better point this out la. Entries on the first page of our Google search. Click to view full page.

Well we can see the Edu Ministry is trying to create a fairer, more on-point system where students get what they deserve. See for example, in Singapore (they follow the bell curve) Deputy Prime Minister Tharman Shanmugaratnam said that giving them an aggregate mark can ease stressful competitiveness, BUT at the same time it defeats meritocracy (fancy word meaning good people get what they deserve). So it’s like a 75-mark A student gets rewarded the same as a 95-mark A student.

Aiyo then all the students who were used to studying at the last minute how?

In Form 1 and 2 they would have been able to pull that off but now that the Education Ministry has introduced coursework for PT3 students, it’s work, work, work all year round. In July, students completed ‘case study instrument assessments’ (fancy name, but it just means coursework) for History and Geography. Based on topics given, students were assessed in their assignments, practical tests, projects, field and case studies.

Oral tests in listening and speech for BM and English were held in August, while written tests for Science, Maths, Islamic Studies, Living Skills, Arabic, Chinese, Tamil, Punjabi, Iban and Kadazandusun languages were held in October. PT3 grades students in other aspects too like sports. Image from SriAraSchools.

The road to holistic studies is paved with course work and co-curricular activities and sports… but then again since it’s something the students are not accustomed to since Form 1 and 2, couldn’t we cut them a bit of slack? Can laaa.

Sounds like a good prep for A-Levels and Foundation right?

Remember the A, B, C, D’s students had to shade carefully with 2B pencils? Well say goodbye to that coz PT3 papers don’t have objective questions any more! Remember these? Well forget them. You ain’t ever gonna see them no more. Image from Totco.

The strategy now is to train students to have the HOTS – higher order thinking skill!! What does that even mean? It means the questions challenge students to think more critically instead of ‘memorising and regurgitating’ like the old PMR used to.

NAH, BACA:
We interviewed 5 Malaysian guys on their thoughts about rape jokes. Here's what they told us.

Noor Mala the Principal said, “they must acquire the knowledge from various sources and not only their text and reference books.”

OK what. Sounds like it’ll bring out the Einstein in our students?

Why the Ministry changed the format is because of feedback from 55,000 people for the Malaysia Education Development Plan 2013-2025: “One of the feedback received was that our education system should not be entirely examination oriented, and our students should be nurtured with critical-thinking and communication skills,” Idris reportedly told New Straits Times.

On the other hand, this also means that it’s hard to check if all students are being graded similarly. Remember that one teacher who always damn garang and mark your karangan extra low? Imagine if you the unlucky one who gets her.

Now imagine if your whole school is the unlucky one. Yikes.

In the old PMR days, the exam papers were centralised, meaning everyone got the same papers. The PMR questions, like UPSR and SPM, were set by teachers from all over the country and compiled by the Examination Board for the final exam paper.

Questions are set by teachers in different state before being compiled for the final paper.

For PT3, papers are picked by teachers in respective schools based on Easy, Medium and Hard level.

Serdang’s MP Kian Ming raised the concerns of possible bias as there’s no standard difficulty-level benchmark, meaning some teachers could set easy-peasy questions if they wanted.

“As a result, this has left teachers, parents and students utterly confused about PT3 – how it differs from PMR, how it will be used to stream students after Form 3, how it will avoid bias in terms of the setting questions and the marking of papers at the school level, just to name a few important items,” he highlighted in The Malay Mail Online.

Don’t you think that if the school teachers themselves set the questions, it would open up a lot of doors for ‘spoilers’? And you remember that those papers used to arrive in those Top-Secret sealed bags? Now how will they arrive? Straight out of the teachers desk drawer? Hmmmmm….. And yes, already there are talks about results manipulation because of this and a variety of other factors. Don’t worry, this is just a school English drama competition. Image from Lan Rasso on Flickr.

Here’s the most worrisome thing. Last time with PMR, with mostly objective questions, all students could at least be graded somewhat to the same standard. Also, papers would be sent to different states to be marked, just like UPSR and SPM. But now, not only are the questions set by the school teachers themselves, but they will mark them as well.

So now, it could lead to a lot of bias in a few ways. Maybe, just maybe:

Eh, it could happen OK! Teachers bullying students is not news any more. If it weren’t an issue, there would be a Facebook community about it.

So you see, that’s why it’s important to send papers to different teachers in other states who don’t know your face and hate your guts. Just kidding la, guys!

The good news is, while the tests are set and marked by teachers of the respective schools, the scores will be verified by the Examinations Syndicate and state Education Departments.

All this while, people have been complaining about our Education System not producing critical-thinking students because of our memorise-and-regurgitate exam style. So we can see what the Education Ministry is trying to fill that gap in introducing higher order thinking skills questions and course work. Some people in fact did support the change to PT3. So maybe it does have it’s potential if they could work out those kinks.

There’s an argument for multiple choice vs subjective testing, and the winner is Finland, which has NO Multiple-choice exams at all!

Finland has ranked at or near the top in all three competencies on every survey since 2000, neck and neck with superachievers such as South Korea and Singapore.” ‘What Americans Keep Ignoring About Finland’s School Success’, The Atlantic

Yes, South Korea and Singapore are ranked higher, but they also have much higher suicide rates. Heck, there’s even a Wikipedia for Suicide in South Korea.

Looking at all the points, PT3 has its pros and cons. The pros being the HOTS factor and holistic academics and the cons being possible bias because teachers set and mark the papers themselves.

But to make the best out of this, it would be a good idea if the Education Ministry set out a proper structure and format for all PT3 subjects and make it available as a document on their site. Teachers and students can access it and it’ll help to finally clear all the confusion about it. Hang on a sec, they have the panduan on their site.

Then what about 2014’s students? They’re the ones made to suffer this first-time experiment. But don’t worry guys, semua harapan still got. Education Director-General Datuk Dr. Khair Mohamad Yusof assured students that: “The PT3 results will not affect students’ entry to residential schools and to the science or arts streams.” Ya, so don’t go abroad k?

Congratulations to the 0.01% who scored Straight A’s, and our sympathies to those who fell short unexpectedly. 😥  Here’s hoping that this brand new school year sees the necessary improvements to make PT3 a propeller towards a brighter future – for the kids and for our nation. PT3 students who are happy with their results. Image from The Star.