So earlier this month there had been a bit of a hullabaloo regarding civilians with military ranks on them. It started with the National Patriots Association (Patriot) asking Mat Sabu to stop the practice of giving military ranks to politicians and celebrities, and to not let them wear military uniforms any longer.

Brig Gen (Rtd) Mohamed Arshad, Patriot’s president, suggested that Mat Sabu start by refusing to wear the army uniform himself, pointing out that not even the British and French defence ministers wore military uniforms. 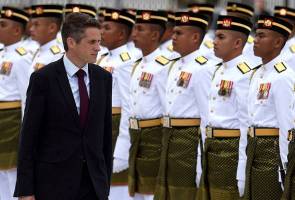 The Malaysian Armed Forces (MAF) had a pretty good track record. Their fame in the Black Hawk Down incident (where they saved US forces in Somalia) and their UN peacekeeping missions were huge achievements, but lately there had been a few incidents that might tarnish their hard-built reputation. One of them was when 7 MAF officers were accused of power abuse when they used military assets to campaign for BN before GE13 and GE14.

There were other shady incidents as well, but Mat Sabu had announced that the new Defence Ministry will take a look at them all, as well as reviewing the awarding of military ranks to politicians and celebrities, and reconsidering their right to wear military uniforms.

“We do not want military uniforms to be misused, and for ranks to be given away freely to politicians. We will study this matter and minimize the incidents as much as we can,” – Mat Sabu, Defence Minister, translated from MalaysiaKini.

So who are these civilians with military ranks these people are talking about? Perhaps the most famous one would be…

Khairy Jamaluddin, the first minister with a real rank in the Wataniah KJ receiving his Brigadier General rank in 2016. Img from mStar.

The Rejimen Askar Wataniah (Territorial Army Regiment) is kinda like the reserve soldiers in the Malaysian army: not really full-time soldiers, but can be utilized as soldiers when necessary. Anyway, Khairy Jamaluddin, the former Youth and Sports Minister, had been commissioned as the Commander of Regiment 508 (volunteers) of the Wataniah, giving him the rank of Brigadier General. This made Khairy the first minister with a real rank (as opposed to honorary ranks) in the Wataniah. There’s like 8 more ranks below Second Lieutenant. Ranks of Captain America and Colonel Sanders adjusted according to Malaysia scale. Ranks from Wikipedia.

So high! How did they get up there? We dunno about the other two, but KJ had been participating in the Wataniah since 2010, and he became a Colonel in 2013.

“(he) once followed a Junior Fighters Basics course for a month on the 26th April 2010 in Regiment 508 and a Parachuting Basics course on the 13th of January 2011 at the Pusat Latihan Peperangan Khusus (PULPAK), Kem Sungai Udang in Malacca before becoming the Commander of Regiment 508 on the 28th of October 2013.” – Translated excerpt from MStar.

Former Sarawak Chief Minister, Tan Sri Adenan Satem, was also a Brigadier General in the Wataniah, albeit an honorary. He was appointed as the patron of Sarawak’s Jawatankuasa Pendukung Askar Wataniah (JAKPAW). But politicians weren’t the only civilians given honorary ranks… Some of us might recall David Teo as the guy who got involved in a slapfight during one of Najib’s TN50 programs, but he’s also the owner of one of Malaysia’s biggest production houses, Metrowealth International Group (MIG), the company behind movies like the Senario series, Mami Jarum and Bini-biniku Gangster. Besides making movies happen, David was also given an honorary Major rank back when Zahid Hamidi was Defence Minister.

“Basically I was invited by the Defence Minister, Datuk Seri Dr Ahmad Zahid Hamidi to promote the Askar Wataniah. But with this award, I see it as a bonus for me to continue promoting the Askar Wataniah to the general public.” – Mejar (K) David Teo, translated from Kosmo.

Following Mat Sabu’s recent statement, David Teo had said that Mat Sabu did not know the procedure of how honorary ranks are granted. His rank was granted by the then Agong Tuanku Mizan Zainal Abidin on the suggestion of the Defence Minister, and it was obtained after serving the Wataniah for a year by bringing artists and members of the media to join the team. David Teo had claimed that if his rank was to be taken away by the Ministry, he won’t mind as it brought him no benefit. However, despite his statement, history had shown that he was shocked when he received the rank within a mere six months of joining the Wataniah.

“Also, I was told that people aged above 45 are not qualified to be a Wataniah, and I’m now 47. Perhaps there was another reason for them to select and accept me.” – David Teo, in 2012, translated from Utusan.

David felt that this slack was given to members of the Arts Platoon, which is mostly joined by artists like him. After receiving the Major rank, he had granted flexible working hours to the staff and talents of Metrowealth Production so that they can participate in military training. Among the artists involved in this platoon were Lisa Surihani, Shahiezy Sam, Diana Amir and Norliana Shamsudin.

Hold up a second. An Arts Platoon? Do they dance or put on plays to distract enemy fire?

There’s an Arts Platoon in the Wataniah, and they’re mostly celebs “It’s called fashion, Sergeant. Look it up.” Img from AllWomensTalk.

We’ve heard of Korean celebrities doing time in the military, but the circumstances had been different in Malaysia. Some had (voluntarily) joined the Territorial Army Regiment’s Arts Platoon, which had existed since mid-June 2011. According to Zahid Hamidi (the Defence Minister back then), the platoon was part of the new National Blue Ocean Strategy for the ministry and was a Key Performance Index. Members of the platoon were even given a special badge so that they can easily be identified in uniform.

But can they fight tho? David Teo recounted that he went through 240 hours of military training within 30 days that taught him, among other things, how to use firearms like the standard M16. Celebrities who join were reported to follow a special course called the Kursus Asas Perajurit Muda (Sukarela) Siri Khas bagi Platun Seni, Media dan Kementah (portmanteau of Kementerian Pertahanan). So we can perhaps assume that they won’t be completely clueless in war.

But news regarding the Arts Platoon had been scarce. A 2011 news report mentioned them in passing, participating in relief efforts for flood victims alongside a biker group in the east coast. Another report mentioned them going to Lebanon to entertain peacekeepers. In 2012, Siti Nurhaliza, Yana Shamsudin and Mon Ryanti went to a shooting range in Sungai Besi to participate in a shooting course. That’s Siti Nurhaliza on the left. Img from Info Semasa.

Besides entertaining the force and going for training, perhaps an important function of the Arts Platoon would be getting people interested to join the military as reserves, like how David Teo persuaded celebrities to join. Some of these celebrities in turn promoted the Askar Wataniah on the grassroots level, including at their alma maters.

“Ahmad Zahid at that time appreciated the efforts of the Wataniah’s media platoon, especially Siti Nurhaliza and singer Ana Raffali who promoted the Askar Wataniah at their former schools by dressing up in the Wataniah’s uniform for the marching event of the schools’ cadet corps.” – Translated excerpt from mStar.

So now that you know a bit about the Arts Platoon, do you think that they deserve a military rank? Before you answer that, wait! There’s more! It should be a no-brainer, but unless you’re royalty, a politician or a celebrity in Malaysia, getting a Brigadier General or even a Major is a long and rough process. Since 2010, the MAF had tightened their quality filters starting from the recruiting process. While in the past you only needed a PMR to get in, now you need at least a ‘Kepujian’ (roughly a B) in Maths, Science and English at the SPM level to get in.

If you want to enter as an officer, you have to at least have a diploma, and serving officers need to have a bachelor’s degree before being considered for the rank of Colonel.

“This way, we will be able to form a better military force not only from a practical perspective but also their way of thinking. For example, the equipment that we use now are very sophisticated and skill-demanding, so the person who handles them must have a good academic background,”- Major General Datuk Abdul Aziz Ibrahim, translated from Utusan.

Promotion can be time-consuming, too. Starting July 2016, promotions are based on time of service: a Private will be promoted to a Lance Corporal after 5 years of service (pay raise from RM1,500 to RM1,700), and become a Corporal within the next three years (pay RM2,200 to RM4,000, including living expense allowances and stuff). Getting to Major General be like… Img from Encyclopedia Spongebobia.

So going in through the front entrance, it would take a vanilla person some eight years to climb the bottom three ranks in the military. Despite that, the younger generation seem to be more interested to enlist. 2015 statistics showed a 12.6% increase in applications to join the military.

“This clearly shows that a career in the MAF is attracting the interest of young people. Based on this reception, we need to choose the best to fill the posts in the MAF.” – Datuk Mohd Johari Baharom, Deputy Defence Minister in 2016, translated from Utusan.

However, with all these honorary ranks going around, one might wonder…

Have military ranks went the way of datukships? Remember when having a Datuk in front of your name meant something? It still means something now, but for most people the meaning would probably have something to do with money and connections. Military uniforms and ranks still mean something to a lot of people, particularly to those who are serving (or have served) in the military.

“We had to really slog all our lives to get these ranks on our uniform. And I feel it is absolute rubbish of the military to give honorary ranks to menteri besars, politicians and celebrities,” – Brig Gen (Ret) Mohamed Arshad Raji, president of Patriot, to FMT.

Datuk Mohamed Arshad revealed that he finally got his Brigadier General rank at the age of 50, close to his retirement. He had voiced his displeasure on several issues, like when the former Defence Minister saw the military uniform as a fashion statement, when politicians showed up in public not wearing the military uniform the right way, and when a politician wore a paratrooper’s badge when inspecting a march formation.

“(on the paratrooper’s badge issue) Some lost their lives protecting the country by being a paratrooper. How many times have they parachuted?” – Brig Jen (B) Datuk Mohamed Arshad Raji, translated fromFMT. 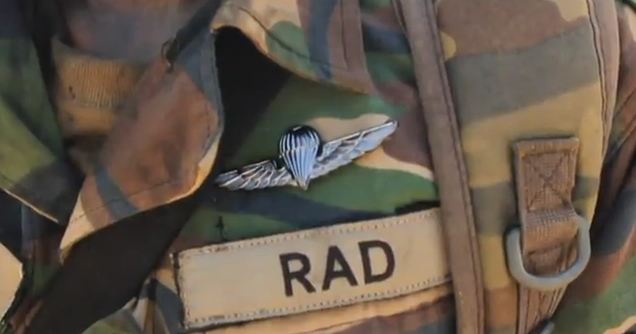 It is said that this special badge is granted through the blood wings ritual: the badge is punched into the recruit’s chest upon graduation, causing the pins to pierce the flesh and draw blood. Img from PencuriVideo.

The MAF has made efforts to improve a lot of its systems to raise its image as the country’s protector. But there’s still a lot to be done by the Minister who holds the Defence portfolio, for example resolving issues regarding its veterans’ welfare. Past scandals, like the purchase of the Scorpene sub should also be investigated to clear the military’s image. It’s a big pile of mess to clean up, and reviewing the practice of giving ranks to the unworthy seems to be as good a place to start as any.