When we talk about the new year, we often speak of embracing new changes and setting new year’s resolutions. But for Malaysian government, the new year also means looking into changing or introducing new laws and policies. But just like how your parents might be unhappy about you quitting your job to backpack across Europe to “find yourself”, the same can be said about the government’s “resolutions”.

More often than not, we’d see the public showing polarising opinions towards these changes (like the smoking ban which had smokers demanding for equal rights as non-smokers at restaurants). Let’s not have this debate in 2020. Unedited img from Imgflip

Which is why sometimes we’ll see the government introducing certain proposals but dropping these plans shortly afterwards due to the public’s negative reaction towards them.

So, as a way of ushering in the new year, we’re going to look at some ideas and policies that were introduced by the Malaysian government, but failed to make the cut in 2019, starting with…

Smoking drugs isn’t cool, nor it is legal. Gif from WiffleGif

For a very long time, getting caught with drugs in Malaysia would land you in extremely hot water, with punishments ranging from a fine, prison time, and even the death penalty depending on the weight of the drugs you were caught with.

But in July 2019, Health Minister Datuk Seri Dr Dzulkefly Ahmad revealed the government’s plans to decriminalise drug possession for personal use, although drug trafficking may still land you with a death sentence.

To be clear, this DOES NOT mean that drugs are legal. So just to be completely clear-er, decriminalisation and legalisation are two different things.

Decriminalisation means you’ll still get fined if you’re caught using or owning small amount of drugs in Malaysia. However, it means that you won’t be facing harsher sentences like prison time for possessing drugs.

For starters, this would help to treat drug addicts as patients who are in need of help, instead of criminals to be punished. Yes, you’ll still get punished with a fine. But more importantly, prisoners who are considered to be drug addicts would receive proper treatment and rehabilitation as well.

Background: As sad as this sounds, it’s actually a crime to attempt suicide in Malaysia and someone who’s found guilty might face up to a year in jail time, a fine or both.

But in October 2019, Deputy Prime Minister (DPM) Datuk Seri Dr Wan Azizah Wan Ismail had announced that the government is looking to review the law and hopefully decriminalise suicide in Malaysia. 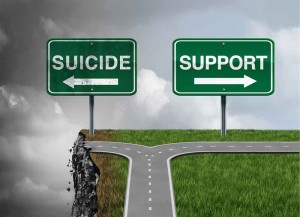 Punishing suicidal people with a crime is never the right way. Img from SJ Echo

One point that’s commonly brought up is that the law that punishes suicide attempts made it’s way into Malaysia during the British Colonial era, and can be seen as outdated (or “archaic” if you wanna be atas about it); especially with the increased awareness and understanding of mental health issues.

Many countries that have started with this law have started to remove it – Singapore removed theirs in January 2020 – and even the British which, as mentioned, gave us this law in the first place; decriminalised it in 1961.

How we imagine fathers everywhere would react to the 7-day paternity leave implementation. Gif from Gfycat

Back in June 2019, Malaysia’s Human Resources Ministry had announced their plan to introduce a 3-day paternity leave in the private sector, although that proposal was kinda left hanging…

…..but thanks to a petition held by the Women’s Aid Organisation (WAO), Human Resources Minister M. Kulasegaran had announced in November 2019 that the government is planning to look into implementing 7 days of paternity leave in the private sector.

If it happens, this decision would mean good news to working dads everywhere in Malaysia as they no longer have to sacrifice their annual leave just to be able to stay at home and look after the newest addition to their family. BUT, just like how maternity leave works, the 7-day paternity leave only applies to fathers of newborn babies, so don’t try to claim paternity leave for your older kids okay?

NAH, BACA:
6 urgent tips for Malaysia vs Thailand this Saturday!

Although 7 days of paternity leave seems like a drop of water compared to the deep ocean of 90 days maternity leave, this could be a first step in recognizing the role of fathers in childcare, and encouraging new fathers to contribute and participate more actively in the household.

And while it’s debatable whether or not this is a step towards gender equality, it definitely brings equality for working dads in the public and private sectors.

4. Teaching of Jawi/Khat at vernacular schools 1 out of the 3 pages of Jawi syllabus that will be featured in the Year 4 Bahasa Malaysia textbook. Img from SAYS

Although we’re pretty sure this issue needs no background, we’re still gonna provide one.

So in August 2019, it was revealed that the Ministry of Education (MOE) had plans to introduce Khat, a traditional calligraphy art form, in vernacular schools. According to the MOE, plans to introduce Khat to the education system had been around since 2014 and, because it’s a writing style in the Malay language, it can be seen as a way to promote cultural and national unity among younger Malaysians.

However, this decision was met with uproar from the public and certain groups such as Dong Zong due to reasons that you can read about here.

Although these plans have been changed many times since it was first announced, the current (at time of writing) plan is to have Khat/Jawi as an optional class, and only for primary school students in Standards 4, 5, and 6. Oh, and the Cabinet (group of Malaysian ministers) decided to rename the subject from “Khat” to “Jawi”.

Out of the 5 points listed in this article, the Khat/Jawi plans are probably going to be heavily debated and changed well into 2020…..at least until it either gets implemented or scrapped.

At the time of writing though, Deputy Education Minister Teo Nie Ching confirmed that the syllabus change wouldn’t take place unless it receives a 51% approval rate from the Parents-Teacher Association.

So yeah, there’s no way of telling how the implementation of Jawi would change things The legal age for marriage in Malaysia is different for Muslims and non-Muslims. While the overall accepted age is 18, non-Muslim girls can get married at 16 with the permission of the Chief Minister of the state. However, Muslims of any gender can be married at any age if the Syariah Court allows it.

The issue of child marriage caught public attention in July 2018, when a 41-year-old Malaysian Muslim man married an 11-year-old Thai girl, which led to so much public discussion (aka outrage) that it motivated the government to review current laws about child marriages – and possibly ban it.

Implementing a complete ban on child marriage may not be as straightforward as it appears, because Syariah laws are enforced by state. This means that it will involve convincing the religious authorities in each state to set the minimum age of marriage to 18.

Another option is to come up with a new set of procedures which the Syariah courts must follow before allowing a child to marry. And while it isn’t a ban, it will reduce the number of child marriages within the country.

In November 2019, it was stated that the child marriage ban couldn’t be implemented because 7 states disagreed with the proposal to change the minimum age to 18.

“Amending the enactment/legal ordinance on minimum age for marriages can only happen if the states agreed with the proposed amendments. Only Selangor has amended the enactment while the Federal Territories is in the process of amending it.” – Datuk Seri Dr Wan Azizah Wan Ismail, as quoted by Malay Mail.

However, it was also mentioned that every state is following a new set of procedures drafted by the Department of Shariah Judiciary, which places stricter conditions on child marriage.

In order for a bill to be passed as a law in Malaysia, it has to go through 3 readings at the Dewan Rakyat, a debate at the Dewan Negara before finally obtaining the Agong’s approval for it to be considered a success (read more about the process here).

How getting a government’s approval feels like in Malaysia. Gif from tenor

And since most of these proposed changes are either put on hold or yet to pass Parliament, it’s probably going to be a close call between seeing these laws realized, or you achieving your new year’s resolution to lose weight for the 5th year in a row.

But let us know…. which of these would you want to see happen in 2020 the most? Let us know in the comments section.