Have you ever hoped that you can turn a RM1 note to, like, RM several gazillion? Well, maybe not gazillions, but this fairy-tale scenario is possible in the real world… with 4D lottery! Recent news told of a mysterious ‘Haji Ando‘ who claimed himself to be from Indonesia and offer lottery number prediction services to his victims, provided they give him some deposit first. But, as you can probably guess, Haji Ando disappeared like the morning mist after the deposit was made.

“I contacted the number and spoke with the man, who confirmed that he offered such a service. I became suspicious when he asked for a deposit, and decided to back off. I also saw a social media posting from someone who claimed he was duped by the man. Some people claimed that Haji Ando boasted that he could predict numbers which could rake in as much as RM1 million. But after placing a deposit, the man would disappear,” – Yunos Md Alif, an almost-victim, to the New Straits Times.

We’ve only managed to find one instance of this Haji Ando on social media, and it was posted like two hours before we searched for it. Lucky! Can’t give you a link to image, because it’s already gone. But here’s the link to Facebook.

And yeah, this may come as a shock to some, but some Malay Muslims do partake in gambling activities, just like everybody else. As for the WhatsApp testimony, except for the donating to orphans part, the whole thing seems pretty convincing. But is it really possible to predict the winning numbers? Before that…

What the hey is all this 4D you guys are going on about?

No, it’s not a bra cup size. For those who have no idea what we’re talking about, 4D is just a short way of saying ‘four digits‘ (or McD instead of McDonalds). It’s a betting game where you guess a four digit number and wager a certain amount of cash, and if your number comes up, you get a lot of money. Most commonly known 4D lottery companies are Da Ma Cai, Magnum 4D and Sports Toto, and the format of the game is generally the same among them.

In the most basic form of the game, you guess a set of four numbers, place a wager on that number and buy a ticket to seal the deal. Afterwards, a set of 23 numbers will be announced, and if your number matches one of the 23, you win the prize money according to the ranking of the number times the amount you wagered, if you play ‘big’. If you play ‘small’, your number must match the top three numbers only, but due to the smaller probability of winning you’ll get a much higher payout if you win. Here’s a sample prize list from Da Ma Cai:

How it works is if you bet RM10, first prize for small would then be RM30,500. Screengrabbed from Da Ma Cai.

People sometimes do unusual things to get the winning numbers Screengrabs from a local film showing grave worship to get numbers. Img from FILEMKITA’s Twitter.

Looking into the literature, a lot of hopefuls have turned to the spirit world to get the winning numbers. A journal from UKM detailed the practices of shamans in Kelantan that specializes in getting these numbers with the help of mystical spirits (we assume genies, although the journal refer to them as ‘khadam’ or slave) and the mystical Malay traditional weapon, the keris.

Some shamans may ask for blood to smear on the keris before performing the number-seeking ritual, and these may come from animals, murder victims or accident victims. This is a prerequisite to ‘pull’ money spirits into the keris, after which calculations using numerology will spell out the winning number. Other keris may have a slit running through its spine, and the shaman may pick a bank note with an odd serial number and pull it through the slit to imbue it with prosperity spirits and encourage the money to multiply (by using the said bank note to purchase a lottery ticket). It depends on which model you got la. Img from kerisku.id.

Other shamans employ a more specific method, like a Pok Mudo who ties his special keris to a red string and use it like a sort of dowsing pendulum. After smoking it over some incense and imbuing spirits into the keris, it will be swung over a set of cards depicting the numbers 0-9, and it will point to the correct numbers. In most cases, the shaman will send out his familiar spirits over to the headquarters of the lottery companies and ask them to find out the winning numbers. However, the lottery companies, according to the shamans, know that a lot of people will try this and employs spirits of their own to guard the winning combinations.

In cases like these, a spiritual fight will ensue, and if the shamans’ spirits win, the numbers will be revealed on the keris, and the shaman will shine a special flashlight on it to see the numbers. After the numbers are obtained, the client will have to do several more things, like paying a deposit (duit pengeras) and waiting a few days before actually buying the numbers, and if they should win, a portion of the winnings must be given to the shaman for him to pay his spirits. Some shamans, like Haji Ando in the above example, even went above and beyond by reserving the numbers for the client only.

Still, others turn to certain animals like burung bayans (sorta like parakeets) to pick the numbers for them, as these birds are considered special due to their rarity. An Indian fortune teller was even reported to have used one of these birds for his predictions. Baby wild boars are considered lucky among some communities in Teluk Intan, Perak, and if one were to wander into a village, some lottery players might pet it before playing, while others will rub bank notes over the boar for luck and use the money to buy the tickets. Some turn to the tombs of holy people for numbers, while others listen to spirits who possess monks. More modern alternatives comes in the form of websites which claim to use complicated algorithms and everything from your birth date to what you ate for lunch last Sunday to predict your personal winning number. Really, the possibilities are endless. Whether they’re effective or not, there’s a huge demand for lottery ticket numbers, and whenever that happens, unscrupulous ne’er-do-wells will step up and supply.

These people looking for an easy lunch became easy lunches themselves

Before you quit your job and go questing for a shaman, bear in mind that for every story where people gamed the lottery companies with their spirit-buddies, there’s a version where people got gamed themselves. The Haji Ando story we spoke of at the very beginning pretty much spelled out the modus operandi of these lottery scams. Before he turned to messaging random people on WhatsApp, Haji Ando and many other lottery scammers used to advertise their quackery on pamphlets. 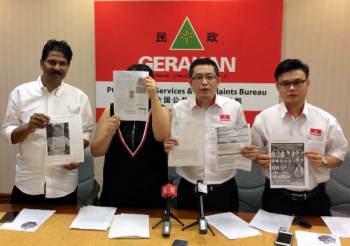 One such pamphlet landed in the hands of a 26-year-old housewife named Wong in 2015, but it was from a fictional Thai monk who claimed that he can give you the winning lottery combinations. After presumably keeping the pamphlet for two years, Wong finally gave in to temptation and called the monk last year. To the monk’s credit, the name he used for his bank account was very authentic indeed.

“A man who identified himself as Seng Shu told me that I have the luck of winning the grand prize of RM960,000 in cash by purchasing lottery. However, I needed to bank-in RM20 to an account under the name of ‘Suvitta Agarbathi Dharma‘ in order to get the number.” – Wong, as reported by The Sun Daily.

For the price of RM20, Wong received a four digit number and an amulet by mail a few days later, which she was asked to burn before calling the monk’s assistant, Ah Dong (pffft). Ah Dong, in turn, gave her another four digit number which coincidentally matched up with her own motorcycle number, but sadly the number didn’t win. She called Ah Dong again, and Ah Dong gave her another number for the low, low price of RM360. But that number also didn’t win, so Wong called him up again… and again, and again, for 32 times. She finally realized that she’d been had after her life savings of RM240,000 ran out. That’s some next level persuasion right there. Or preying on people’s desperation. Img from the Lens of Fake Truth.

Another case told of a businessman who paid RM60,000 to a Thai monk in return for a jackpot lottery ticket that will net him RM100 million if he won (two exact sets of four digit numbers, probability about 0.000001%). After an initial deposit of RM4,000, the monk called him after a few days and told him that he won the jackpot and asked for more money to send the money to Malaysia quietly to avoid taxes and stuff. After the money was banked in, we’ll give you three guesses of what happened next.

Gif from Know Your Meme.

A similar case happened to another guy, and after telling the guy he won RM1.9 million, he asked for more cash for documentation, interest and GST to send the money to Malaysia, he vanished as well. Hearing these scams, one might wonder…

Can you actually predict lottery numbers?

Ask that question to the Internet lottery gurus and shamans, and they’ll say yes. Ask the same question to the lottery companies, and they’ll probably say no. So can it be predicted or not? To answer that question, here’s a (true) story of a 49-year-old guy in China who lived alone under a bridge named Wang Chengzhou. Why does he live under a bridge? Well, Wang had big dreams of making his mark in lottery research, and when he’s not working part-time in a nearby post office or cleaning buildings for a living, he researched the mathematical formula behind the lottery’s winning digits. For that, he needs solitude.

“I have mastered the algorithms of lotteries,” – Wang Chengzhou, as reported by the Star.

And even if his 76-year-old mother begged him to return for Chinese New Year, Wang would not return until he succeeds. A math professor from a nearby university, however, said that Wang’s endeavor is almost impossible, as lottery numbers are randomly generated. Almost. As for using genies and talking to the dead, we can’t say for sure, but as the UKM journal pointed out, the reputation of these shamans grew from getting the numbers right most of the time. Plus, a guy from our office once went to a shaman for a number, and he won RM500 from that, so maybe these people are on to something.

Anyways, whether by math or by genies, going to ‘lottery experts’ is almost as much of a leap of faith as buying lottery tickets themselves, and in the worst case scenario, you could lose even more than what you set out to get in the first place. So how do you protect yourselves from such tomfoolery? The police, for one, suggests the public to not be so gullible.

“In many cases, the victims only realise they were tricked when the number did not ‘strike’, with the syndicate unable to be contacted after that. The public has been reminded many times to be careful when it comes to offers that are too good to be true, yet we still record many such cases on a daily basis nationwide.” – Mohd Luthfi, Assistant Commissioner, to the Malaysian Digest.

And… yeah. That’s about all the advice you need, actually.

Share this article:
NAH, BACA:
7 places in Malaysia where you can potentially develop superpowers