Just recently, the Kedah state govt had reportedly requested for an orphanage to be shut down. It was reported that the orphanage centre, Pusat Jagaan Kanak-Kanak Cahaya Amal Bistari, had exploited children to beg for donation and operated illegally without the permission of the Welfare Department.

Pretty normal right? Here’s where it gets weird. The centre is also apparently considering legal action against the state govt for false claims towards them. For what!? Well before we get to that, we managed to chat with Mira, a woman who first reported this center to the authorities back in 2017, and one of the things she noted was…

The kids beggars they used were exceptionally well-trained 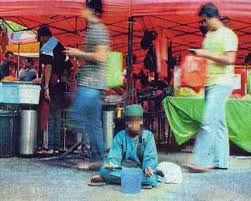 The kids of Pusat Jagaan Kanak-Kanak Cahaya Amal Bistari, are a bit more well-trained than your typical beggars who sit there and wait for the compassionate. Instead, they’ve allegedly been trained to not just seek donations, but sell stuff and answer any questions potential donors may have. Ismail Salleh, an exco of Kedah Islamic Affairs, had this to say about the child beggars:

“When I told them what they were doing was not right, they told me they are ‘entrepreneurs’. This was the same script used over and over again.” – Ismail told FMT.

Ismail added that the centre had been using these children to gain public sympathy so that the public would donate or buy their products. Well, this may seem like a good tactic since we even had experience with this, when one of our former writers pretended to be a beggar around KL. He claimed that most of the public would donate to women, especially women with children! Woman carrying a child around while begging near Masjid Jamek

And Ismail wasn’t the only one who had encountered these child beggars. Mira meanwhile said that the centre’s modus operandi wasn’t only in Sungai Petani but throughout Malaysia!

“They (the children) are at restaurants, petrol stations and malls. They will bring some products like ointments and apricots to sell. Most of them told me that they’re about 9-17 years old. And when I went back to my hometown in Terengganu, they were there!” – Mira on Twitter, translated from BM.

Aside from being accused of exploiting children for donation, Pusat Jagaan Kanak-Kanak Cahaya Amal Bistari was also accused of operating illegally! However, when we got in touch with the center’s administrator Ustaz Siddiq, he told us a pretty different story…

The orphanage denies the begging, and that they were in the process of becoming a legal orphanage

It’s important to note that not all orphanages in Malaysia are registered, and not all unregistered orphanages are automatically dodgy.

From the Amal Bistari centre, they claimed that they’ve been kicked out of their premise… twice. One of the administrators, Ustaz Siddiq, even posted a video on Facebook about them being kicked out:

In fact, there was even a viral message doing the rounds in WhatsApp groups and Facebook which warned people not to donate to this orphanage because of their dodgy registration issues. The message was written by Kamaruddin Kassim, president of an organisation called the Urusetia Menangani Gejala Sosial (UNGGAS). A viral message claiming that the orphanage was dodgy because it’s registered under different names. This writer also received this viral message!

Although UNGGAS claims that the information in this viral message is true, Ustaz Siddiq again gave us a differing opinion, stating that both centres were entirely separate entities. According to Ustaz Siddiq, Pusat Jagaan Kanak-Kanak Cahaya Amal Bistari was funded by Pusat Rawatan Amal. “Pusat Rawatan Amal was formed to fund the cost of expenses for the needs of these orphans in Pusat Jagaan Kanak-Kanak Cahaya Amal Bistari. The teachers in our centre provided Islamic treatment services at Pusat Rawatan Amal. We also get funds via donations from the public.” – Ustaz Siddiq.

When Pusat Jagaan Kanak-Kanak Cahaya Amal Bistari got shut down, he posted up the video on Facebook to allow people to help them by donating some money to the centre. This is probably how they got enough money to seek legal advice.

We’ll leave the verdict to the courts, but let’s skip to a different story, that might be connected.

Another tahfiz center is allegedly owned by… a CULT leader!?

Similarly to the orphanage discussed earlier, Pusat Tahfiz Amal (different pusat, we dunno why they like ‘amal’) was instructed by the Kedah Islamic Religious Department (JAIK) to cease operations in 2014. Apparently, the tahfiz centre was accused of exploiting children to sell products for donation and was operating illegally for… SEVEN years! It was also reported that JAIK had issued a notice to shut down the tahfiz centre way back in 2007.

The tahfiz reportedly used the children to sell products which were made by its owner, Azhar Wahab. His company, Al Mansur Holdings Sdn Bhd, sells herbal products and provides reflexology services. Although the company may sound like any other regular company, JAKIM had clarified that Azhar Wahab is apparently a cult leader and his company is said to be a branch of the Al Arqam cult called… Al Mansur. Hmmm, coincidence much? Azhar Wahab reportedly used all the money from the donation for leisure. Img from Says.

And here comes the weird part. In the aforementioned viral message, UNGGAS claimed that the orphanage was previously known as Pusat Tahfiz Amal Bistari, which is Azhar’s tahfiz centre that we just mentioned.

However, Ustaz Siddiq of the orphanage centre denied that the centre was owned by Azhar or has anything to do with the tahfiz centre.

“Our centre has no connection to SM Amin (Azhar Wahab). The founder and owner of our centre is Tuan Haji Zainal Abidin Bin Haji Abu Samah.” – Ustaz Siddiq told CILISOS.

Aside from these cases, there were other cases of orphans being forced into begging syndicates too. One example is that of an orphanage in Penang that allegedly used youths in its begging syndicate around KL. The victims were forced to beg around the Klang valley for about two years before being rescued by the authorities. The authorities suspected that the orphanage involved in this case was an illegal one.

OMG… Should we all just stop donating to orphanages!?

At the time of writing, the owner of the centre, Zainal Abidin Abu Samah, was reportedly faced with two charges with being involved in administrating an illegal centre in two separate places. If he was found guilty, he would be charged with a fine of up to RM10,000 or jail time of up to two years or both.

The 11 orphans, on the other hand, were reportedly under the custody of the Welfare Department while the rest of the children were sent back to their parents. Although this case seem to have its ending, most cases of illegal orphanages aren’t even reported! This is probably why a welfare organisation has called the govt to form a body to control illegal orphanages. Rumah Penyayang Ulin Nuha (RPUN) reportedly mentioned that it is time for the govt to form this body to prevent orphans from being abused and forced into a begging syndicate.

But we may already have a body for that. The Social Welfare Department’s officers are responsible to oversee these centres and welfare homes besides investigating them whenever necessary. They would also monitor these centres to ensure that cases of abuse like this doesn’t happen.

While we don’t want to discourage good will, you might wanna check where your money ends up. And you can do so here to find out whether the orphanages or welfare homes are registered with the Social Welfare Department.