This is Doris Yapp Kim Youn (aka Doris Jones on Facebook), a 51-year-old Sabahan who works as a legal assistant. Just like some of us, she owns a Facebook group. She’s currently living in the UK and, for the past four years, she couldn’t return to Malaysia. 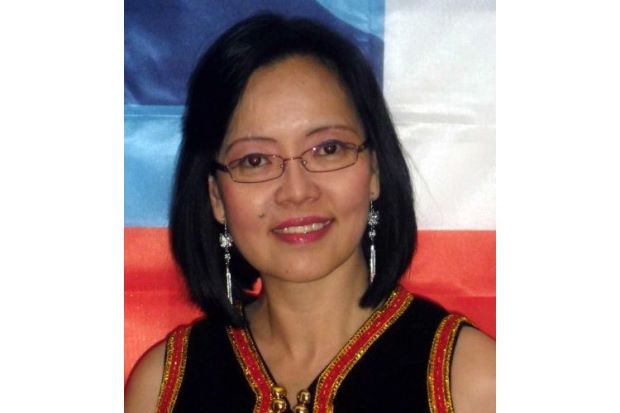 Doris Jones. Img from The Star

And that’s probably because… the govt wants to arrest her. In fact, the govt asked Interpol’s help to find and arrest her. This is probably happening because of the Facebook group she owns which is called Sabah Sarawak Keluar Malaysia (SSKM).

We managed to get in touch with Doris to find out more about what actually happened to her and how she got the idea on the secession of Sabah and Sarawak. Apparently…

SSKM was initially created to instill awareness on Sabah and Sarawak’s rights.

“We started the campaign (SSKM Facebook page) because mainly us, I’m talking from the age of 20s to early 40s, got fed up (with) how much we voted yet the voting results is not as expected.” – Doris Jones told CILISOS. Pretty much this too.

Besides that, Doris has been tagging several ministers on SSKM and her own Facebook posts on issues that concerns Sabahans and Sarawakians. For instance, she claimed that East Malaysia has been lacking in so many things from opportunities in education to basic facilities. Based on her observation after staying in KL for a little while, she said that even the Sabahans in Kota Kinabalu don’t really have sufficient facilities as compared to KL people. Imagine having pipes that are supposed to provide people with water but there isn’t water supply at all! 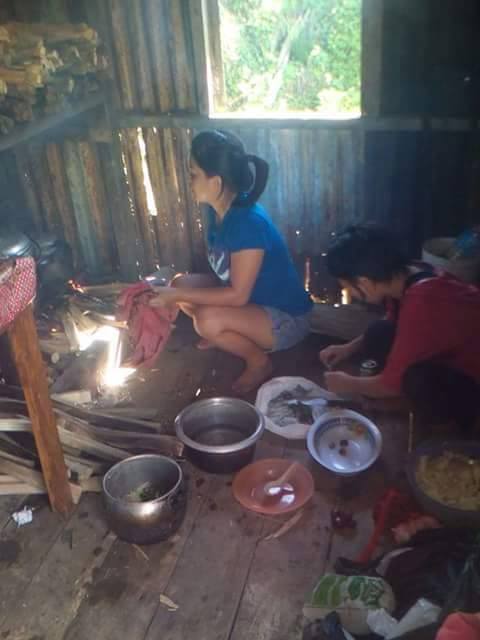 The people of Ranau are still living like this even in the 21st century. Img from Doris Jones’ Facebook

SSKM’s main objective has only been about East Malaysia’s rights since the day the page was founded in 2011 up until 2014. But for some odd reason, according to Doris, she was suddenly intrigued by the idea of secession after remembering how Singapore did it first in 1965. Doris claimed that leaving the Federation would make Sabah and Sarawak less dependent on Putrajaya and they could actually fix their economy.

She initially began by questioning the needs of following British laws.

“Why is the Sedition Act still around when it was from the British govt? Why are we still using this law although Malaysia is an independent country? So, I question why can’t we voice out our dissatisfaction and create awareness to the rakyat on matters like this (their rights). And if the govt doesn’t listen to the rakyat, then it’s probably best if we (Sabah and Sarawak) leave the Federation but that doesn’t mean we should be enemies.” – Doris, translated from BM. Like this ke? Click image to read more about the restoration of equal status of Sabah and Sarawak.

That was probably why, in January 2015, a warrant arrest was issued against Doris under the Sedition Act and she eventually made to the police’s wanted list. Doris was reportedly wanted to be present in the magistrate court to answer the charge against her. Just to give ugaiz a clearer picture of why is it seditious to suggest secession, Sabah and Sarawak actually have no rights to secede according to the Malaysia Agreement.

So, because of her actions…

Before we continue with the story, we have to point out that Doris isn’t in the wanted list on Royal Malaysian Police’s (PDRM) website. But that’s probably a story for another day. And, as she was telling us the story, it didn’t seem like Doris was aware about the warrant until she had to renew her passport.

“I took the (queue) number and paid £40 but when they (officers) called my number, they told me to wait for a while. I was then interviewed by Encik Azhar, the head of immigration there at that time. He told me that they received an email from Putrajaya which says that my passport cannot be renewed. I asked him for what reason and, if I have committed any crimes, which court announced it. He only told me that it was an order from Putrajaya.” – Doris.

Since Doris still has her MyKad, some lawyers in Malaysia have called out the previous govt (well, cos this happened back in 2015 before GE14) for breaching citizenship rights according to the Federal Constitution. A civil liberties lawyer, Tengku Fuad Ahmad, mentioned that the authority have no power to deny Doris’ her passport just because she has a warrant against her.

“Even if she was convicted, passports are usually only denied on grounds of security.” – Tengku Fuad to Malay Mail, 2nd October 2015.

So, the previous govt gave her another option to return to Malaysia la but Doris didn’t seem to be convinced with that idea. A day after the incident at the Malaysia Embassy, Doris was actually offered an emergency certificate to travel to Putrajaya instead of her usual route to Sabah. 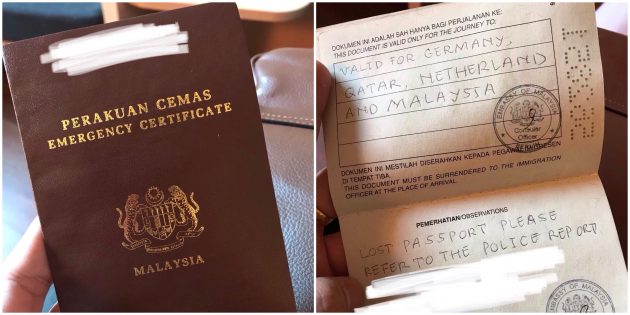 This is how an emergency certificate looks like. Img from Oh Bulan!

Fyi, an emergency certificate can only be used on a single journey back to Malaysia when you lose your passport, transporting a deceased Malaysian back home at the govt’s expense or for those whose passport cannot be issued within a given time. You can read more about the emergency certificate here and what to do if you lose your passport abroad here.

“The reason I want to go back to Sabah, besides renewing my passport, is to visit my family. If I go to Putrajaya, is it guaranteed that I can get home to Sabah? Or am I going to be held captive there and no one would know about it just like in other cases? I am not stupid to just receive (the offer) like that when there isn’t any guarantee that I can get back to London.” – Doris to CILISOS. There were actually reports stating that Doris wanted to return to Malaysia since she still has family members in Sabah but that didn’t seem to happen la because she told us that it has been years since she last set foot in Malaysia. So that is probably why…

NAH, BACA:
Dr M just did something and pissed China off... and it could be because of Jho Low

Since Doris refused to take up Putrajaya’s offer to fly back to Malaysia, PDRM eventually sought Interpol’s help to locate and detain Doris in London. Although Interpol was actually ready to arrest her if she was involved in criminal activities, it wasn’t able to do so because… the UK has repealed its Sedition Act. This would mean that her alleged seditious activity isn’t recognised as a crime in the UK. *cue dramatic music*

That makes Doris somewhat untouchable by the previous Malaysian govt la because, besides the Interpol, the warrant issued against her by the Malaysian govt can only be used in Malaysia. Oddly enough, the Sabah police had only admitted this seven months after the warrant has been issued! The sudden realisation that all your effort has probably gone to waste. Img from Malay Mail

However, she wasn’t the only person wanted by the police. Apparently, four other SSKM volunteers were detained in November 2015 and later tried for alleged seditious activities too. The prosecutor actually listed a few words that are deemed seditious. For instance:

Doris actually defended that the statement isn’t seditious through her Facebook page:

And since Doris decided to stay in London, there is nothing the previous Malaysian govt can do to proceed with this case. So, with Pakatan Harapan took over the govt after winning GE14 last year…

…is the new govt any different?

At the time of writing, Doris, who is a permanent resident in the UK, is still living there with her husband and child, and is a legal assistant who works with a team of paralegal. She has tried to renew her passport in August 2018, after the change of govt, but still faces some trouble to do so. This time around she was asked to call and email Putrajaya because the embassy officers claimed that they don’t have the access to it.

But up til today, she has yet to receive any reply from Putrajaya. :/ So, as for now…

“I can either request for a British passport or not. Meanwhile, I’m in the process of applying for an international passport under the UN. If they (the Malaysian govt) want to be angry with me for having other passports, that is pretty much their fault.” – Doris.

Doris has been living in exile for about four years now and within that period of time, she claimed that nobody came forward to help her except for Waytha Moorthy, Minister in the Prime Minister’s Department. However, instead of contacting her personally, he had publicly announced that he was going to help her. Erm… tbh, we weren’t able to find any news reporting about that tho. But we found this picture of her with Sabah’s opposition leader, Datuk Dr Jeffrey Kitingan. Img from Doris Jones’ Facebook

Anyway, Doris told us that she has lose faith in the govt because of what happened to her. In fact, she believes that the govt’s intention to amend the Federal Constitution to restore East Malaysia’s equal status with Peninsula Malaysia is just a propaganda.

“This (amendment) is only a discussion. Even if it is a written decision, it won’t happen. Just refer to Sabah’s 20% oil royalty that has been demanded since 1976, when I was still in Standard One. Tun Fuad requested for 20% because it (what Sabah has been receiving) isn’t fair but the decision on that has been postponed until now.

If we’re equal partners, why is it a big deal when we demand for our rights. This (amendment) is just an excuse, rather than saying ‘I don’t want to give you (what you want)’, they make an amendment. There isn’t any outcome on the research made on MA63.” – Doris.

Just in case you missed it, the amendment didn’t jalan when it didn’t get 2/3rd votes in the Parliament. Well that’s probably because, according to Batang Sadong MP, Nancy Shukri, the govt didn’t give some time for Sabah and Sarawak leaders to discuss the matter. Apparently, Sabah and Sarawak leaders were also looking to amend Article 160(2) of the Federal Constitution on the definition of ‘federation’. Fighting for Sabah and Sarawak rights is something Doris has been doing for a while now and although she hasn’t returned to Sabah for four years, she is still educating Sabahans and Sarawakians on their rights.