On the morning we published the emergency number article, Sosboss coincidentally discovered a snake in his house! Before calling 999, he had a lot of questions in mind about the snake, especially since he had no idea what type of snake it was. Attempts to Google for whether this snake is venomous or not didn’t really help, because all he got was a bunch of latin names and very few pictures. And turns out he wasn’t the only one who found a serpent intruder. Another CILISOS colleague had the same issue, but luckily for her and her fam, their cat came to the rescue and beheaded the snake! The poor snake at her house.

And just last month, a lady from Tanjong Karang bashed an intruding cobra while she was still fuming from a fight with her bae. Regardless of how you’re feeling when a snake sneaks in, it’s probably not a bad thing to know if the snake can kill you or not.

In fact, the bomba told Sosboss that they come across 12 daily ular di rumah cases, which is a lot. So, if you know anyone who is (or might be) having a snake in the house, refer them to this easy guide, thanks to our sources, Vee (a jungle guide from Raub’s Gibbon Rehabilitation Centre) and Steven Wong (a snake photographer).

Oh and venoms are dangerous, so if you’ve been bitten, STOP READING AND GO TO A HOSPITAL!

According to The Star, Malaysia sees around 2,600 to 3,700 snake-bite cases a year, registering between one and six deaths annually. The chances are low because we have 139 hospitals around the country with anti-venom. Here are a few helpful tips if you’ve been bitten.

Ok, so Here are the snakes that are CONFIRM venomous

Snakes that are commonly found intruding Malaysian homes are Common Wolf Snake, Reticulated Python, Sumatran Spitting Cobra, Painted Bronzeback and Oriental Vine Snake. On the plus side, Steven said that there aren’t many venomous snake species out of the whole snake population in Malaysia.

“I think there are 168 species of snakes (of which 26 species are venomous) in Malaysia. This number changes all the time… Because scientists are always discovering new species and lumping old species together and so on.” – Steven told CILISOS.

In Malaysia, there are 2 confirmed families of venomous snakes (out of 4 globally):

For your convenience (and survival), here are pics of the confirmed venomous snake species:

(Warning: Don’t be fooled by their beauty.)

Bungarus (Krait)
Triangular body cross section (imagine your triangular-shaped colour pencils but in snake form). Be very careful of the Blue Kraits – more than fifty percent of all bites result in death—even with the administration of anti-venom. Luckily, they aren’t usually aggressive and usually only bite if you kacau them kowkow. 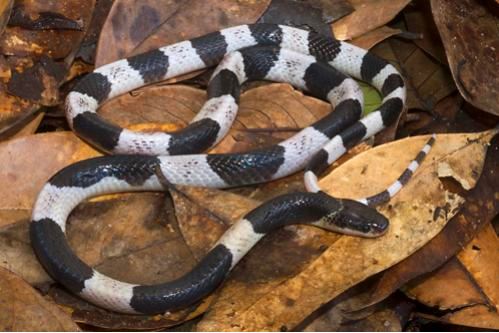 Which inhabit lowland to mountainous forests and primarily preys on other snakes. which can also be found in lowland to mountainous forests, but more likely around streams and rivers. These guys are some of the most venomous snakes in existence, but thankfully are usually not aggressive and prey on other snakes. Naja (Cobra)
We think this one quite easy to spot la. Makes loud hissing noises, the standing posture with an expanded head. This deadly cobra can be found in hilly areas up to 700 m and close to human inhabited areas. Naja sumatrana a.k.a Equatorial or Sumatran Spitting Cobra. Image from Norhayati A.

Found mostly in lowland areas and you might wanna watch out for this guy because it’s very likely to enter your house. This vulnerable species is usually found in forests and plantations from the lowlands to 2000 m hills.

Now we move on to the VIPERS, who generally have thin necks and relatively large triangular head.

In Peninsular Malaysia, this species is restricted to Perlis and Kedah. It camouflages well on the ground among dry leaves and is allegedly guilty for most snake bite cases. However, apparently some of these bites might be “dry-bites”, which don’t ‘waste’ the snakes venom. As its name implies, this species lives in mangrove forests, mostly perched on mangrove roots. 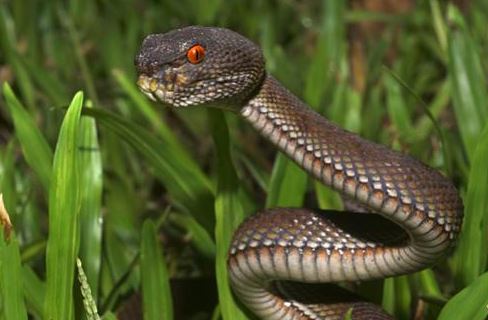 Also true to its name, it lives in mountainous areas. Can be found in both lowlands and highlands. 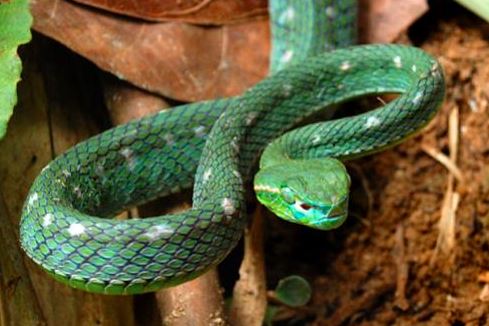 This one’s pretty rare in Peninsular Malaysia and found hanging out at the canopies. 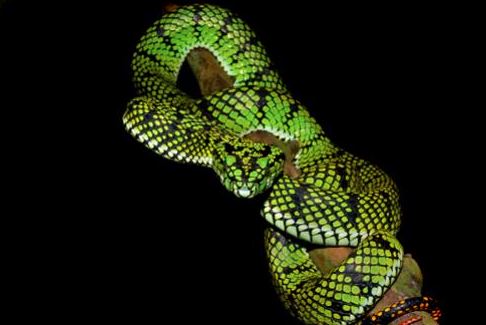 Continuing the colours of skittles, this pretty one is sadly endangered, spending most of their lives on trees in lowland and highland tropical forests. 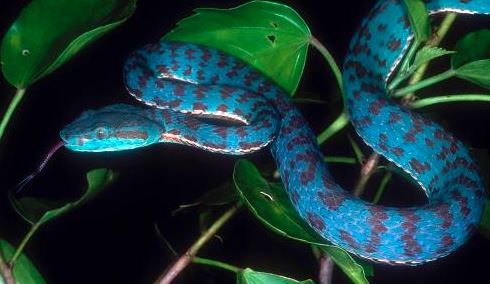 Found in some lowland forests of Langkawi, Perak and Pahang. 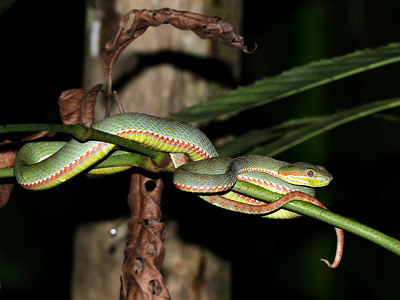 This vulnerable species can be found in cool, highland forests, as its name implies. Found living in trees in lowland and highland forests. Can be living in trees in lowland, swamp and mangrove forests. 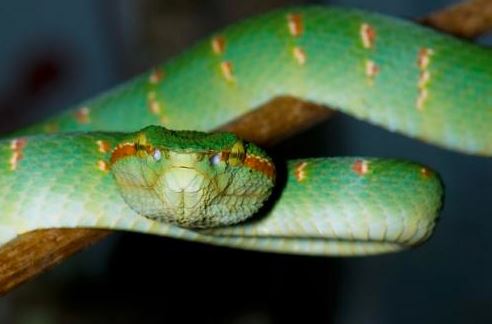 Found in lowland and highland forests, around streams. Might be easy to mistake it with the red-headed krait we showed earlier.  IF you get bitten but have no pain or swelling, please go to a hospital regardless! If left untreated, the snake’s venom can cause muscular paralysis, double vision, and cardiac arrest. Lowland and highland forests, but not enough data has been collected about this species, so be careful They can be found in moist areas under rocks, logs or other surface debris. And here are the ones that are CONFIRM non-venomous

There are some snakes that reportedly don’t kill with venom. Basically, any snake that’s not elapidae or viperidae like…

You can find this species in houses, lowland forests, plantations and grasslands. It still bites if you kacau it, but won’t die la Also found in houses, lowland forests, plantations and grasslands. As you might know, even though it’s non-venomous, it has been known to eat humans, but they’re so big, that something tells us if you see one, you’re not gonna take the time to Google it. 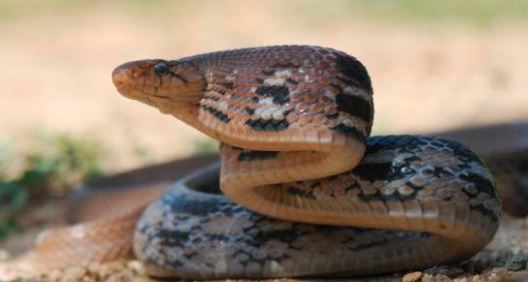 Coelognathus radiatus a.k.a radiated racer. Image from the Reptile Database.

This one’s more likely to be found in plantations, where it might actually be useful in keeping the rat population under control. Also found in forests and shrublands. Also kinda cute 🙂 As you can see, they come in all shapes and sizes, so just to be safe… call 999

If you wanna kepoh for more info on snakes, the Malaysia Biodiversity Information System (MyBIS) has a really useful and comprehensive database of snakes found in Malaysia, complete with info on taxonomy, habitats, breeding, venom, IUCN Red List status, antivenom and even emergency contacts… definitely more than we can put in an article.

If you still struggle to tell how dangerous a snake you see is, don’t put yourself down. The experts have said that it’s hard to say for sure if a snake is deadly or not because there’s no fixed general features that can be identifiable by an untrained person.

“I have seen a few diagrams or drawings meant to generally distinguish venomous snakes from non-venomous being widely shared in Malaysia. Trust me, DON’T TRUST IT. ” – Vee.

In fact, Vee went on to say that attempts to identify a venomous or non-venomous snake may result in grave injuries or worse.

“One of the most innocent, lethargic and non-aggressive looking snakes family like Calliophis genus (Coral snake) are extremely venomous and the antivenom are next to non-existent for some species. They are so dangerous one may not even realise they have been bitten.” – Vee.

This is why our non-venomous list is so short, because it would be irresponsible to make it any longer. Steven said that, if the snake is surely non-venomous and small like the Common Wolf snake, you could just sweep it onto a dustpan and throw it out. But as mentioned earlier, it’s hard to generalise venomous from non-venomous. That’s why Vee’s advice is to always assume that the snake is venomous.

And no, bamboos and sulphur don’t work.

“There’s no scientific proof at all that the presence of bamboo, sulphur and the likes deter snakes from approaching the place. Some cobra species may be found mainly in bamboo areas because of the concentration of their prey like rodents in bamboo areas.” – Vee.

And even if you could correctly guess that a snake is venomous (or the snake is too big for you to sweep it and toss out), then you’d definitely know that you gotta stay away and call 999 (yes it works on mobile), which will direct you either to Civil Defense or Bomba (click here to find out how long they took to come when we called)

“The first best option is to reduce the risk of any human injury conflict, like isolate the occupants of the house from the area the snake is. Then call Civil Defense or Bomba. Keep track of the snake’s movement, but must ensure that safety is priority.” – Vee.