Recently, the nation was shocked and saddened by the untimely death of six of our Bomba personnel while they were doing a Search and Rescue (SAR) at a mining pool at Taman Putra Perdana, Puchong last Wednesday. According to the director-general of the Fire and Rescue Department of Malaysia, Mohammad Hamdan, the tragedy was a first in the department’s history.

“This event was the first in the history of the Bomba service, as there had never before been so many deaths in one single incident. It was a calamity that we feel is very sad, and we never wanted for this to happen,” – Mohammad Hamdan Wahid, translated from Sinar Harian.

In the incident, four members of the force from Pelabuhan Klang (Mohd Fatah Hashim, 34; Izatul Akma Wan Ibrahim, 32; Mazlan Omarbaki, 25; and Yahya Ali, 24) as well as two members from Shah Alam (Adnan Othman, 33; and Muhammad Hidzful Malik Shaari, 25) drowned while searching for Mohd Ilham Fahmy, 17, who fell into the flooded mine that evening. The perished firemen. Img from Kosmo!.

With such an incident happening, people started talking about the disregarding of SOPs (Standard of Procedures), lack of knowledge in rescuing, and even the supernatural being involved… One may perhaps wonder…

What happened to these men actually? The weir where it happened. Img from FMT.

At about 5 p.m. on Wednesday, the Bomba received an emergency call that a 17-year-old guy fell into the flooded mine at Taman Putra Perdana. Following that, 8 personnel from Cyberjaya’s Bomba Department were rushed to the scene. At about 9 p.m., another six personnel arrived; 4 from Pelabuhan Klang, and 2 from Shah Alam.

They believed that the missing boy was at a small floodgate that lets water into the mine (the mine was used to somewhat control the rise of floodwater), so the six formed a human chain by connecting themselves to a single rope, then walked in a single file below the weir (like a dam, but smaller) to search for the boy. However, one of the personnel slipped on the stone slab beneath the weir and fell into a sort of whirlpool. Since they were all connected by a rope, the others were pulled in as well. The ongoing SAR operation the following morning. Note the actual deepness of the place. Img from The Sun Daily.

Entangled by the rope, the six had to struggle for half an hour before they were pulled out by the others, and although CPR was performed on them, all six were confirmed to be dead at about 9.50 p.m. They were later sent for an autopsy at Hospital Serdang, and were sent back to their respective states to be buried the next day. Their deaths raised a lot of questions from the public, but…

Although they claimed to have followed the SOP, accidents can still happen

While some had alleged that the firemen involved were not prepared enough for the case, all six were certified for rescue diving. But they did not initially plan on diving. According to Mohammad Hamdan, it was supposed to be a surface water rescue, so all six weren’t wearing diving equipment when they were walking in a single file below the weir. And although the water was only chest-deep, heavy rains caused the water flow to be much faster, creating a strong current which turned the weir into a death machine. Water flow beneath a weir/dam. Img from US National Parks Swiftwater Rescue Manual.

Normally, to escape the sideways whirlpool after a weir (see image), you huddle up in a ball until you reach the bottom, then swim out and away. However, that might not be so easy if you’re entangled with five other people. The change in current presumably happened while they were already in the water, so their tactics became unsuitable for the occasion.

“Our personnel had seen the probable outcomes and handled it correctly. During the rescue, the situation of the current changed, causing the applied technique and tactic to be unsuitable due to the strong current,” – Datuk Soiman Jahid, deputy director of JBPM, translated from Kosmo!. When asked on why the SAR operation was performed at night and not postponed to a better-illuminated time, Mohammad Hamdan had said that rescue operations had to continue anyway as someone’s life was at stake.

“In any emergency situation, it’s not optimal (to rescue in the dark). If the operation was planned, we can abort it. However, if it involves the lives of people being searched for, maybe we have to decide based on the situation,” – Mohd Hamdan Wahid, translated from Berita Harian.

Hamdan had said that the Bomba will investigate the matter further to ensure that this tragedy will not repeat itself in the future. However…

NAH, BACA:
Venomous or not? Here's a handy list of snakes commonly found in Malaysian houses

Could such a tragedy have been prevented in the first place? Another drowning case, one year ago. Img from NST.

While perhaps nobody could have anticipated what had already happened to the firefighters, people frequenting the flooded mine is no news to the locals. According to the missing boy’s father, Mohd Azzam Naim, there were no fences to keep people from going to the mine, and the locals as well as foreigners would often go there to fish.

“Also, two months ago, two men drowned there. I told my son to not go to that place, especially as recently we’ve been having a lot of rain. I didn’t expect him to go there with his two friends,” – Mohd Azzam Naim, translated from Astro Awani.

People drowning, especially in mines, is also not an uncommon thing in Malaysia. A 2017 report had stated that an average of 1.6 people drown every day in Malaysia, or roughly 700 every year. Of that, 500 cases involved children below 18 years old. According to Datuk Amar Singh, head of the Perak Clinical Research Centre, it’s an even bigger problem than dengue.

“The people know that dengue is important. But one dengue-related death involving a child is equal to 30 children who will drown, that is the comparison. Drowning is a much bigger problem,” – Datuk Amar Singh, to Malay Mail.

While the Selangor government had ordered that the mine at Taman Putra Perdana be closed to the public as soon as the SAR operations are over, perhaps we should also be looking at what the US National Parks’ Swiftwater Rescue Manual (PDF, 86 pages) called preventive search and rescue (PSAR) as well, which involves reducing the cases of water incidents through signage, printed messages, public education campaigns and targeted patrols at areas with histories of water-related accidents. 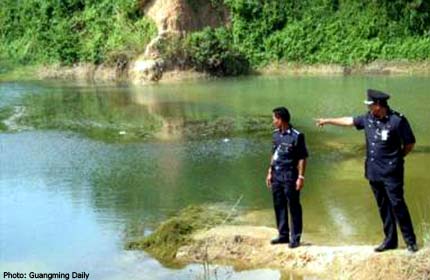 Mining pools can be tempting, but dangerous. Img from AsiaOne.

The death of the six Bomba personnel was regrettable, but regardless of their SOPs and whether they were well-equipped or not, the public has just as much of a responsibility to prevent incidents like this from happening again, perhaps through simple steps like:

By being aware of the dangers ourselves, we can reduce the need to expose our personnel into these dangerous, preventable situations.