Lately, issues surrounding the tudung caught the attention of the media. In the beginning, it started when the Malaysian Association of Hotels (MAH) defended the practice of some hotels to ban its front line staff (those dealing directly with guest) from wearing tudungs. This prompted some strong criticisms from the Tourism and Culture Minister, Datuk Seri Nazri Aziz.

“To me, whoever who wants to defend (non-’tudung’ practice in hotels), that this is an SOP, I feel they are imbecilic, especially if they are Malaysian citizens.” – Datuk Seri Nazri Aziz, quoted from Malay Mail Online He said while looking quite dapper himself. Screenshot from themalaysianinsight.com

At the same time, the wife of ex-PM Mahathir, Tun Siti Hasmah also made headlines when she made some comments about why she herself doesn’t don a tudung. In an interview, she revealed that it was because Tun Mahathir didn’t allow her to do so, and as a woman, she had to seek permission from her husband.

But as we learned from SOSCILI, the tudung debate has actually been going on for a few decades already. In modern times, the tudung fashion in Malaysia has evolved into many fashions and styles, but if you traveled 30 – 40 years back in time, wearing a tudung was as bizarre as a turtle riding a unicycle.

While confessing to a giraffe. Image from thedadproject.com

Wearing a hijab was so weird, it can land you on the front page of the news!

What the average tudung fashion used to look like. Image from hazis.wordpress.com

In the 1970s, it was very rare to see Malay Muslim girls cover up as they do now, at least according to Editorial Adviser of Sinar Harian, Datuk Jalil Ali. Tudungs were something that was reserved for special occasions, like during funerals or kenduris. Other than that, most Malay women were comfortable without it. There were even certain places in those days that prohibited women with tudungs 😯 .

“Some offices and banks put up notices that prohibit women with tudungs, because it made the women look like criminals. Covering your head was view as old fashioned, extremist.” – Datuk Jalil Ali, quoted from Sinar Harian A master of disguise, second only to Johny Depp himself. Screenshot from coconuts.co

Covering yourself up was something people those days considered very strange, and more surprisingly, people who dressed that way were kinda shunned.

“There was one time when I had to report about 2 sisters who just landed in Subang Airport. Both of them were daughters of a famous person, but they were wearing the hijab and had their faces covered. Their pictures were on the front page of newspapers the next day.” – Datuk Jalil Ali, quoted from Sinar Harian

Obviously, that’s a very stark contrast compared to today, but there’s an equally interesting reason behind the practice. Much like the wizarding world of Harry Potter, there was some sensitivity surrounding one’s lineage in the Muslim community at the time, particularly towards those of Arab and Indian origin because they were seen as exploiting Malaya Malays. Those groups were singled out even in Singapore as they were banned from joining certain political parties. That resentment naturally spilled over to fashion.

“In the 1930s, the conflict between the Malay and Arab community encouraged the Malays to break the mold of Arabic practices with something “new”.” -Muslim Dress Fashion Transformation In Malay Peninsula, 1930-194, Nazirah bte Lee

So the groovy ladies have actually been wearing tudung, but the way that they sported it was different from what we usually see today. As a lecturer from UiTM’s faculty of Theater and Animation told SOSCILI, the way the ladies wore tudungs back then could just be a kain kelubung draped over their heads, or like a tudung manto.

“This was considered high culture, and it could still be seen in Melaka even in the 1950s.” – En. Nur Afifi Mohamed Taib told SOSCILI. Eventually, the western influence also took hold in local fashion, and western styles and clothing soon became a norm in the society too. The same trend seems to be shared across the world, as this video might prove.

So at the time, tudungs as they are today were quite few and freaky… that is until about a decade later, when a few things happened and reversed the trend. 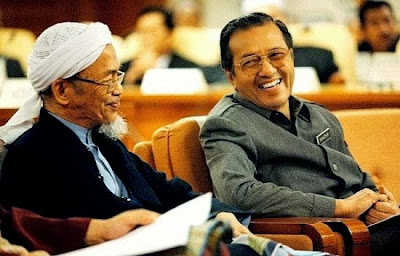 A younger Dr. Mahathir and the late Nik Aziz. Image from http://kedahkekl.blogspot.my

From the 1970s onwards, the fashion of Muslim women began to shift. The surge of Islamic movements, especially in Universities became a growing significant influence. The general sentiment now was one that called for the Malay community to return to its Islamic identity. One of the more vocal and inspirational groups was Angkatan Belia Islam Malaysia (ABIM), a non-gomen organisation with that was said to have succeeded in renewing the appreciation of Islamic teachings in the community.

“In those years, the situation also cast a spotlight on the issue of tudungs and the awareness to tutup aurat in the presence of men.” – Islam dan Transformasi Sosial Masyarakat Melayu Malaysia: Suatu Kajian Eksploratori, Mashitah Sulaiman.

The premiership of ex-PM Tun Dr Mahathir was also said to have affected the dressing habit.

“The development of Islam in the 1970s was also linked to the return of Dato Seri Dr. Mahathir Mohamed to mainstream politics in Malaysia. Under his leadership, the Malaysian government was seen to support many policies related to the progress of Islam.” – Islam dan Transformasi Sosial Masyarakat Melayu Malaysia: Suatu Kajian Eksploratori, Mashitah Sulaiman.

At the same time, a little thing called the Iran Revolution also happened, where a religious leader managed to overthrow the Iranian monarchy and established the Islamic Republic of Iran. The religious authorities of the new Iran also happened to insist that the hair of women is considered part of the aurat, and hence should be covered. Because of that, some scholars think that the current tudung practices could have been influenced by the revolution. En. Afifi (the UiTM lecturer) shared the same opinion, and added that tudang trend happened worldwide. 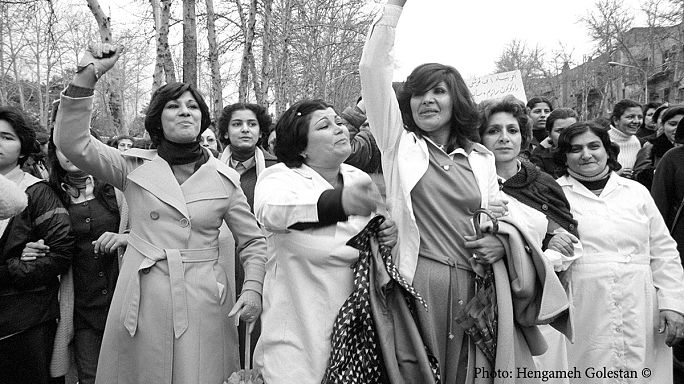 “Iran’s rise at the time affected the fashion trend to some degree, it was called “fesyen dakwah”. Many types of tudungs were made to match with the baju kurung, and tudungs started becoming a trend. But not everyone followed it, mostly only the younger generation that were into religious studies.” – En. Nur Afifi Mohamed Taib told SOSCILI.

And with that, that’s how the evolution of the tudung played out in Malaysia. But until now, the matter of the hair being considered a part of the aurat or not is still being debated by prominent Muslim figures across the world. You can read more about it in the SOSCILI article.

Is the Malay culture being overshadowed by Arab culture?

Lately, we can see many who wear garments with Arab and middle eastern features. Among some that you might have seen are the long white robes (jubah), the white prayer hat (kopiah), and the turban (serban). On top of that, there also seems to be a trend of  the Arab language being normalised. According to Prof Syed Farid al-Attas, he thinks that the adoption of Arab culture will negatively affect the Malay culture.

“Wear the jubah and kopiah, and you would have ignored the Malay wear. By extension, this is also a neglect of the Malay culture. But at the same time, we feel that our culture is being left behind… So this becomes a problem if we adopt Arab components, is our culture not equal to the Arabs?” – Prof Syed Farid al-Attas, quoted from Malaysiakini

Though we won’t be doing this anytime soon. Gif from makeagif.com

But some would like to remind us of the difference between “Arabisation” and Islamisation, because as we should know, just because its Arabic, doesn’t mean it’s Islam, and vice versa. But from a fashion perspective according to En. Nur Afifi, the mixing of cultures is perfectly valid, just be sure not to overdo it.

Share this article:
NAH, BACA:
Guess how many timezones Malaysia had before finally having one standard time?