OMG you guys, Pandelela Rinong and Cheong Jun Hoong won a SILVER medal as a team in the Olympic Games diving event! Malaysia BOLEH!! News has been going around that they got RM300,000 incentive (to be shared) and lifetime pensions. WAHH!

Whether you’re into sports or not, the Olympics is something that can’t be ignored. It’s EVERYWHERE… people are talking about it, newspapers are reporting it, it’s even in the fast food we eat. We’re all rooting for our Malaysian athletes. In the excitement of seeing our divers bring home two silver medals, have you ever wondered what rewards Malaysian Olympics athletes get if they win medals?

We contacted Regina Lee, press secretary to the Minister of Youth and Sports, Khairy Jamaluddin. She led us to the National Sports Council’s site, where incentive schemes for ALL the sports events Malaysia participates in is stated. Got SEA Games and Commonwealth Games incentives as well, but let’s just focus on Olympics right now…

Can you guess what’s the reward for winning an Olympic GOLD medal??

Regina had directed us to the Skim Hadiah Kemenangan Sukan (SHAKAM) which started in 1986. This incentive scheme is divided into Groups A and B. Group A includes the biggest of the biggest games like the Olympics (A1), Commonwealth (A2) and the SEA Games (A3).

Team of less than 5 athletes

Team of more than 5 athletes Team of less than 5 athletes get RM300k for a silver medal. The athletes must share the reward equally. Image from NST

So since Pandelea and Jun Hoong won medals as a team, what would happen if one of them won a GOLD in a individual category? Got discount ka?

“In the case of the Olympics, if say Pandelela wins silver in 10m platform synch diving and a gold (fingers crossed) in 10m platform individual, she brings home RM1mil + RM150k (because the RM300k would have to be shared with Jun Hoong).” – Regina in an email to CILISOS

*Note: This quote was received before our girls won the silver medal as a team. One wish fulfilled! Whee!*

So far Malaysia has not won a gold medal in the Olympics YET  😎  but we’ve scored four silver and three bronze medals in badminton and diving events.

But do different events get rewarded differently? For instance, do badminton Olympics medallists get more rewards than diving or whatever? However Regina told us there are no double standards for that. She said the incentives for Olympic medals are SAME regardless of the sport. Only difference is the grouping (individual or teams) and weightage of the championship (whether Olympics, Commonwealth or SEA).

Adding to that, Paralympics athletes now get the SAME amount as Olympics athletes, in line with a policy shift in 2013 by the Youth and Sports Ministry.

On top of that, Olympics athletes get lifetime pension! O.O

This incentive is called Skim Imbuhan Tetap Olimpik (SITO). Initiated in 2006, SITO guarantees that any Olympics medallist gets a monthly allowance for the REST.OF.THEIR.LIVES. Errr, though when you count in inflation, the amount won’t be much in 20 years la: The Skim Insentif Sukan Olimpik (SISO) awards athletes a monthly allowance of RM2,000. The payment of the allowance is based on the qualifying date within a year before the Olympic Games take place. Ugh, brain freeze. Good thing we had Regina to explain to us.

NAH, BACA:
How Lee Chong Wei might have taken steroids in a herbal soup

But people have offered Olympic athletes extra rewards before… 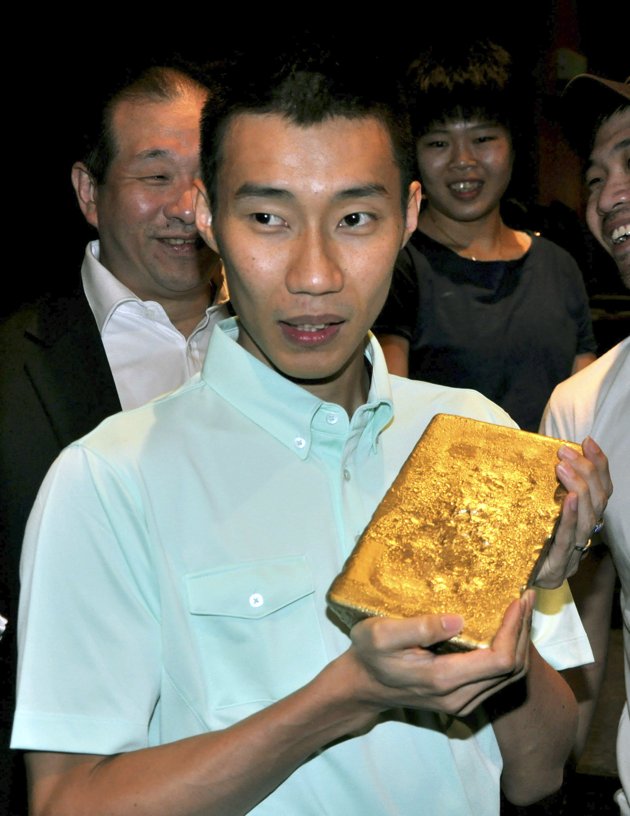 What is that?? Bread? Cheese? Image from keehuachee.blogspot.com

In his odd way of showing appreciation to badminton medallists, gold mine owner Andrew Kam offered a 27.5 pound gold bar worth $630,000 (then RM2mil) as a reward to whoever could bring home a gold medal. But he only made the offer to badminton players during the 2012 London Olympics coz he loved the sport. “I can produce gold, I believe they too can produce gold,” he said. This generous offer is the only one we came across, where a random guy who’s not part of the gomen or any sporting organisation offered such a lucrative reward to Malaysian athletes. If you know of any other incidents, comment k.

But if you guys didn’t know, Malaysian athletes (or any athletes in general) will get additional incentives from the Rio games. Namely, the medals themselves, which are worth a lot of money. They’re made of copper, silver and 24-karat gold, each amounting to US$366 (RM1459 at time of writing).

Lastly, let’s not forget that successful athletes might receive a Datukship as Lee Chong Wei did. Jun Hoong and Pandelela were recommended to for Datukship by Sarawak Deputy Chief Minister Tan Sri James Jemut Masing.

Wah! Nice life wei. Should we dump our textbooks for racquets? Hmm… this is a tough one to debate, coz you can see the pros and cons for both arguments. Look at China, the controversy of their ‘gold medal factory’. Kids train 10 hours a day in sports schools, but the results are gold, gold, gold. (In total, China has won 201 gold medals in the Summer Olympics and 12 gold in Winter Olympics.)

As the saying goes, no pain, no gain, and the glory they get at the end of the day seems to be worthwhile to some of their athletes. However, not everyone can stomach this China’s method, not even Chinese people themselves. It’s a moral dilemma which you guys can judge for yourselves.

So, if Malaysia were to focus on improving its sports performance and succeed in producing gold medallists, what happens to their future after they retire? And we know that in sports athletes tend to have to retire early. More so if they kena injury. So there’s the question of how will they sustain themselves after they have no steady income.

Many Olympians struggle with adjusting to life after retiring from sports. A survey conducted by the Professional Players Federation found that 24% of ex-sportspeople have fought health, addiction or financial problems as they tried to develop second careers. Perhaps what we could set up is a program for former athletes – help them adjust to life, help them find jobs to continue to be useful members of society, maybe they could even become coaches to train the next generation. At the end of the day, it’s not easy being an athlete – all that blood, sweat and tears. People like Chong Wei, Pandelela, Ju Hoong and Nicol David are real HEROES. And their parents who sacrificed everything, put aside their dreams of raising a future engineer or doctor to see their kids go all the way in the sports they love. Hopefully this makes Malaysians appreciate the athletes we have even more.