So Syed Saddiq’s back in the news again for a variety of reasons. From telling his staff to call him bro, to being criticised by various LGBT activists for failing to stand up for Numan Afifi, it seems as tho he never fails to stay out of the limelight. But amidst all the headlines of the Young Bro-hormat in recent weeks, you  may have missed this one here: 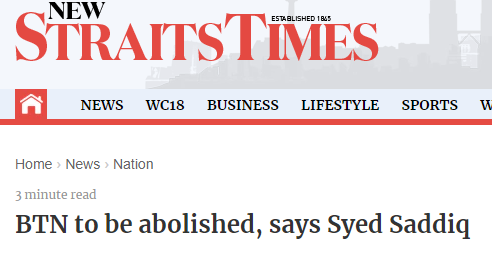 We asked around the office if anyone knows what the BTN is and the results were quite 50/50, with one colleague actually asking if it was a K-pop group. BTW dis not BTN but BTS. Photo taken from Soompi.com

Nonetheless, upon looking it up further, it turns out that the BTN, or National Civics Bureau, is actually a government agency that’s been around for quite some time and is also pretty controversial for a variety of reasons.

Yep, it’s older than everyone here at Cilisos (ugh millennials). Ironically starting out as a government agency under the Ministry of Youth, its original name was the Youth Research Unit. It was then moved to the Prime Minister’s Department in 1981, and renamed to the National Civics Bureau (Biro Tatanegara) a year later. I have a slight feeling that this signboard is missing a letter. Image from The Star

Moved into the Prime Minister’s Department by Dr Mahathir himself, the BTN has received quite a lot of funding over the years. The Star reported back in May that the BTN went from getting around RM20million in the 1980s to a whopping RM200million in the next decade. That figure rocketed to RM550mil in 2000-2010, with the BTN getting about RM365million from 2010 to 2015 alone.

*not actual images of BTN officers. GIF from Naver

The BTN currently has 14 branches in each state, a Nationalism Academy and a further 17 ‘Bina Negara’ camps throughout Malaysia. Their, um, stated aim is to encourage and instil the spirit of patriotism among participants, fostering a love for the country with moral values that would help Malaysia reach the mythical Wawasan 2020.

A quick Google search for other countries that have a ‘patriotism agency’ directly under the government didn’t yield much other than the Pioneer Movements of last century, although we did find that Nigeria has a similar government agency called the National Orientation Agency.

On paper, a well-funded agency meant to instil positive and patriotic values into our youth doesn’t seem thaaaaat bad right? But in actual fact, many people have been calling for it to go for years…

Well actually ah… Both Pakatan and BN no like BTN!

Yeah…. let’s just say it doesn’t have the greatest of track records.

PKR dude Nik Nazmi – currently the Setiawangsa MP –  was one the earliest and more well-known critics of the BTN. Having attended a BTN camp himself, he described the program as racial and political, with a strong anti-PKR/DAP/PAS rhetoric. He also claimed that the people in charge were teaching participants that ‘Malays required affirmative action’ and that PAS were deviationist. It wasn’t just the then-Opposition who were criticising the BTN tho. In 2009, UMNO’s Datuk Seri Nazri Aziz – the then minister in the Prime Minister’s Department – lashed out at the BTN after they were again called out for their allegedly racist teachings toward camp members.

“There are people who attended the courses who came out very angry… Do they want to say that Malaysia belongs only to the Malays and the government is only a Malay government? Should only the Malays be given the spirit of patriotism? Other races are not patriotic about their country?” – Datuk Seri Nazri Aziz, as quoted by The Star

Sadly, despite years and years of people constantly pointing out issues with the BTN, little changed. Even in 2015, leaked presentation slides that were apparently used in BTN camps claimed that ‘racism can unite a race for good‘ and also featured a list of counterculture independent book publishers and accused them of being Opposition activists. A leaked BTN slide showing a list of indie book publishers and their supposed political alignments. Image from Malay Mail Another slide. Taken from hakam.org.my

Other accounts of the BTN camps include body-shaming, religious insensitivity and use of racial slurs. That being said, there are some who did find it beneficial and positive. The Star did find former BTN participants who had good things to say, such as being more spirited to be Malaysian, learning more about the country and learning to be more united. Also, if you’re surprised by BTN programs, you might be even more shocked to learn that camps like these aren’t that uncommon in Malaysia. *gasps*

There are also Islamic Rehabilitation Centres that are basically camps where people arrested by JAIS or sent by family members are ‘rehabilitated’ into the Muslim faith. While the centers deny it, there have been reports of severe mistreatment of patients at these rehabilitation centers.

NAH, BACA:
3 curious things that #MERAH169 props had in common

The criticism of BTN over the years tho is hard to ignore. As such, it’s not much of a surprise then to learn that dissolving the BTN was actually part of Pakatan Harapan’s GE14 manifesto. However, in the weeks after Pakatan’s victory, despite Syed Saddiq saying that the BTN will be dissolved, reports are coming out of Putrajaya that…. well…. they won’t be dissolving it after all.

It a strange turn of events, according to an unnamed source, it appears as though the BTN will be reformed and restructured. The goal seems to be to reform the BTN using the Japanese education model. The future for BTN – if there is one – would appear as a place for helping out the civil service from within the government. In the meantime tho, the current iteration of the BTN has been suspended while it waits for the higher ups in the Prime Minister’s Department for instructions.

BTN employees after realising they’re not getting fired

Some members of Pakatan Harapan who aren’t in government are also in favour of reforming rather than dissolving the BTN. DAP old-timer Dr Tan Seng Giaw approves of the plans to reform the BTN first before completely abandoning the BTN. Furthermore, some Opposition members also want to keep the BTN. UMNO’s Datuk Lokman Noor Adam made the claim that there had already been plans set in motion to reform it prior to the change in government.

This flip-flop over the BTN does go against the government’s GE14 manifesto as well as Syed Saddiq’s comments tho. Even the grand old man of the DAP himself, Lim Kit Siang, came out to say that the BTN has no place in the Malaysia Baru.

In an ironic twist, perhaps the group making the loudest noise in calling for the dissolving of the BTN is the Malaysian Chinese Association. They’ve called out the lack of action by the new government when it came to fulfilling it’s promises in their manifesto, with the abolishing of the BTN one of their major concerns. At the very least, they can be commended for doing their duties as a good Opposition by proving a check and balance to the current government.

While it remains a contentious topic of discussion among lawmakers and politicians, we can at the very least appreciate that the open debate over it is a sign of a healthier democracy in Malaysia.