[Update 16th June 2017 – Uh-oh. US authorities have just revealed more info about the 1MDB money-laundering scandal. In addition to the list of stuff allegedly paid for by the allegedly ill-gotten funds, the US alleges that a sum of money were allegedly used to purchase a Picasso painting, an apartment in Manhattan, and……. rights to the super-stellar Jim Carrey movie masterpiece, ‘Dumb and Dumber To’.]

Back in June, the US Department of Justice revealed that it filed a lawsuit against several Malaysian big shots for breaking the laws of irony by spending their (allegedly!) ill-gotten funds to fund The Wolf of Wall Street – a movie about a stockbroker spending his ill-gotten funds.

Okayla, it’s actually because the DOJ’s super pedas Kleptocracy Asset Recovery Initiative (KARI, geddit?) found that money that may have been illegally taken from 1MDB was being used to buy stuff in the US, so they’re filing a lawsuit to freeze and recover the assets, which includes the rights to The Wolf of Wall Street movie. But this really isn’t what Malaysians are talking about. The discussion on everyone’s lips is-

Who is Malaysian Official 1?

And pretty much a whole lot of you on social media have been asking that question.

We naturally think that the identity of Malaysian Official 1 is the prime…. question to ask, but what if it isnt? Perhaps the better question is “Why did they reveal the names of some of the people involved (like Jho Low and Riza Aziz) but not others?”

To clarify, Malaysian Official 1 isn’t the only unnamed person in the DOJ’s court document. There are actually a few others who remain unnamed, such as:

If you think about it, it doesn’t make sense for them to mention some of them by name while keeping the identities of others a secret if it’s within the same lawsuit, right?

So CILISOS decided to ask the DOJ themselves First up, we gotta say that whenever we send questions to local government agencies, it’ll be a good 2 or 3 days before we get replies – if at all. To our surprise, the DOJ sent their reply within 3 hours! Efficiency!

We asked them 3 questions – why some names are revealed while others are not, if there’s a policy to determine which names get censored, and if the identities of the censored names will ever be revealed. Here’s what they said:

“Thank you for reaching out to us.

In addition, the complaint provides sufficient detail to specifically identify the property subject to forfeiture and to clarify the basis of the government’s case should anyone with a valid claim wish to challenge our case.  Identifying persons and entities aids that function.

If an individual or entity does not fall within the parameters outlined above, then court rules require that we anonymize their identities.” – Peter Carr, Office of Public Affairs in the US Department of Justice, in email reply to CILISOS.

Yeahhhh… official legal replies like these would make any non-lawyer’s head go spinny spinny boom boom, so in traditional CILISOS fashion, here’s a simplified version for you (Note: We aren’t lawyers so please take the DOJ’s reply as the official version):

“Legally, we have to make sure we’ve done our homework so that the case can jalan in court. This means we need to have enough facts to show the possibility that US money laundering laws were broken, and that everything we’re rampas-ing either involves or can be linked to the illegal money.

Also, the document gives enough details of what we gonna rampas and why we gonna rampas them in case people who, y’know, own or have a valid claim to these things wants to challenge our case in court. So it helps if we name these people and things la.

But then right, if a person dun fall under that criteria, then we’re kenot tell you who they are lor.” – Badly and non-legally interpreted by CILISOS. Sorry 2 Peter Carr from DOJ.

If you want an even easier summary, what the DOJ is saying is that, for the purposes of their case, they have to prove that the money was illegally acquired in order to take the case to court and win it. Very simply put, the unnamed people were part of the money trail investigated by KARI, but didn’t actually hold or use any of that money in the US.

If you read between the lines, what this also means is that…

Jho Low and Riza Aziz are….

Again, Jho Low, Riza Aziz, and another Malaysian who’s not relevant to our story were mentioned in the report by name. In the third paragraph of the DOJ’s reply, they explain that it’s so that Jho Low and Co. can challenge the DOJ’s lawsuit to freeze and confiscate their (allegedly!) illegal assets if they want to.

But this also means that the three are now the ones most likely to also face criminal charges in the future. We shared the DOJ’s email with lawyer extraordinaire Fahri Azzat, and he arrived at a similar conclusion:

“My answer is yes, they are in very, very deep trouble with the law in America. I imagine once the money seizing exercise is over, they will then commence indicting all of them. The US are very clever in how they approach it. Once they seize the money, Jho Low and Riza Aziz will be very vulnerable. That is their power. Now it is all gone. I doubt they will get to leave the country either now.” – Fahri Azzat, in email reply to CILISOS.

By this point, you might be thinking that these fellas are the ikan bilis, what about Malaysian Official 1? Why can’t the US take action against him? They sked izzit?

NAH, BACA:
Malaysia's been hit by a mega computer virus. How likely are you to kena infected?

Actually, naming Malaysian Official 1 might mess up their entire case (and more)!!!

One thing you gotta understand is that this isn’t your ordinary court case… it can’t be a simple Go-to-Jail-Do-Not-Collect-200-Million because it involves the diplomatic relations and legal systems of two countries.

When it comes to Malaysian Official 1 it is because he is a political figure who’s still serving their position. So as former US ambassador to Malaysia John Mallot says, it is the US policy not to name political figures in office out of diplomatic courtesy. The other reason they may not name them is because they are not legally culpable and to name them would result in having an adverse effect on their reputations.” – Fahri Azzat

In fact, the DOJ had to change the way it handled cases against foreign officials after a bribery/money laundering case involving a Thai official in 2009. You can read it yourself here, but the gist of it is that it created a conflict of interest. One example pointed out is that it would be very awkward if the US courts found the official guilty while the Thai courts found her innocent. So in the context of Malaysia, if the Attorney-General happens to find Malaysian Official 1 innocent of these charges then tamat cerita lor. *cough*

And now for the RM2.6 billion question… Who is Malaysian Official 1?

Since we’ve gone so far into this topic, we may as well talk about this. We’re not going to answer the question with any certainty since we’re allergic to prison, but to many Malaysians and ex-Prime Ministers the answer is obvious:

This is because of the many clues scattered thoughout the DOJ’s court document, but even the description alone pointed to someone…. familiar:

MALAYSIAN OFFICIAL 1 is a high-ranking official in the Malaysian government who also held a position of authority with 1MDB. During all times relevant to the Complaint, MALAYSIAN OFFICIAL 1 was a ‘public official’… ” – Quoted in part from the DOJ’s court document

So for the fun of it, we decided to do our own Korek Korek Detektif™ and looked for someone who held (note the past tense) at 1MDB, and also holds (note the present tense) a high position within the government. Some people have been changed in 1MDB’s leadership, along with their website back in May, so we used the WaybackMachine to check out an older version and found 4 people fitting the bill: 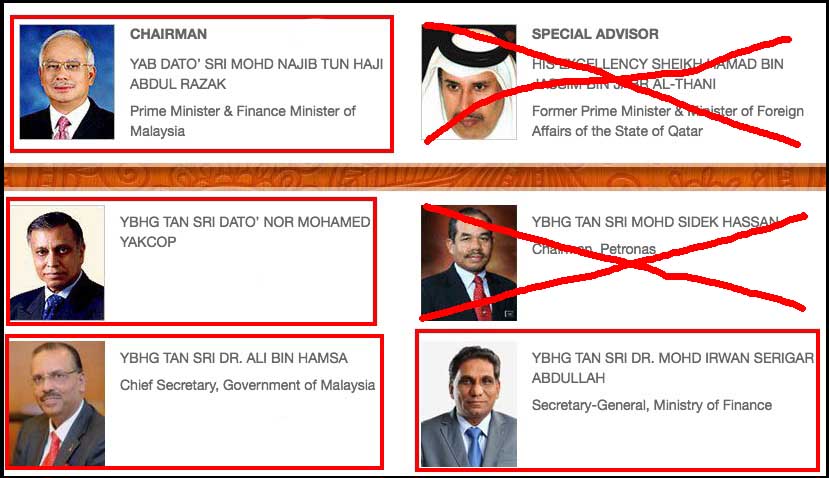 Screencapped from a March 18, 2016 version from Wayback Machine.

But aha! if you look at the description of Riza Aziz:

“Riza Shahriz Bin Abdul AZIZ (“AZIZ”), a Malaysian national, is a relative of MALAYSIAN OFFICIAL 1 and a friend of LOW…” – Quoted in part from the DOJ’s court document

We know that Riza Aziz happens to be PM Najib’s stepson, but there’s no telling if he might be related to someone else in that list. But hey, that’s just a theory… a CILISOS theory! Update: Minister in the Prime Minister’s Department Rahman Dahlan has gone on record confirming that MO1 is PM Najib, and that “only an idiot won’t know who MO1 is“. However, he also added that it also means that Najib wasn’t involved, which ties in with everything that we’ve mentioned so far  🙂

So what will happen to Malaysian Official 1? Remember how we mentioned that Malaysian Official 1 may have immunity from prosecution? Well, he loses that immunity the moment he’s no longer in the prime…. position that he’s in. Also, Fahri tells us that Malaysia has has no statute of limitations for criminal offences:

“If you committed a theft 50 years ago, I can still charge and trial you today because the law does not impose limitation on offences. So if MO1 leaves his post say 10 years from now – the government can still charge and prosecute him for those offences that he committed prior to him stepping down.” – Fahri Azzat

But this may be easier said than done, with the recent cabinet reshuffles seeing ministers as high up as the Deputy Prime Minister losing their posts. But still, IF we were Malaysian Official 1, the smartest thing to do now would be to strengthen our position as much as possible to prevent that from happening. For instance, we would…….