Most of us on the older side might remember the hype surrounding Vision 2020, or more commonly referred to Wawasan 2020. Ah, the posters we used to draw in art class, with flying (levitating?) cars, gleaming skyscrapers and the obligatory trio of Malay, Chinese and Indian smiling up towards a brand new sun…

This is actually a poster for a KL2020 campaign, but close enough. Img from Kembara7.

Truly, at the time it was a vision of the future that could be, where nothing is too ridiculous for Malaysia. Imagination about Malaysia’s future ran free, like in this comic from Rileks! magazine in 1998: With 2020 just around the corner, however, Malaysians today might look out the window (or worse, the news) and wonder: what the hell happened? Where’s my flying car? Where’s my muhibah? Why aren’t we standing in the eyes of the world yet? Where’s my LRT-

-oh wait, we do have that. And gleaming skyscrapers as well. And better highways (frequent traffic jams notwithstanding), with so many layers and exits you’d need to have Internet you can carry around for maps… which we now have as well! We’ve come a long way since 1991, when Wawasan 2020 was first announced. But how close were we from actually realizing it?

Well, if the only metric to consider is whether or not we have flying cars, the answer would be much simpler. But perhaps surprisingly to some…

If you ask a random Malaysian on the street what they think Wawasan 2020 means, some will probably say something about technological and economic advancement or being a world superpowah. Of course, many may also mention flying cars. These answers won’t be completely wrong, but the real plan actually goes deeper than that. It’s like we built our Wawasan 2020 fantasies from a Jetsons episode.

Basically, back in 1991, the then Prime Minister Dr Mahathir presented a paper titled ‘Malaysia – The Way Forward‘. This paper sets down an ideal version of Malaysia that we should strive towards by 2020, which is a fully developed country, but in our own unique way. Not just economically developed, but politically, socially, spiritually, psychologically and culturally as well.

“To be sure, each of the 19 (developed countries), out of a world community of more than 160 states, has its strengths. But each also has its fair share of weaknesses. Without being a duplicate of any of them we can still be developed. We should be a developed country in our own mould.” – Dr Mahathir, from ‘Malaysia – The Way Forward‘.

That’s a huge thing to accomplish in 30 years, and Mahathir knew that. He acknowledged that Wawasan 2020 would be an impossible goal if we don’t overcome some glaring problems that has plagued us since we became Malaysia. There were nine challenges he listed back then, and they have to do with having a society that’s:

While there were some deliberation on how to achieve the final two goals, the rest weren’t talked about as much. The remainder of the paper talked about the economic roles and functions of the public and private sectors, but basically the plan seemed to be to develop better Malaysians, and once that’s achieved, economical and technological advancement will follow.

To build the ideal society, hence the ideal developed country, the government had introduced several measures over the years. We won’t list them all here, but among others there’s the National Service (NS) program, the Domestic Violence Act in 1995, better infrastructure like monorails and telecommunications, and the ‘Malaysia Boleh’ slogan, although that last one may have started from a marketing campaign. The origins are perhaps as blurry as this img. From Quora.

But despite all that effort, we can’t really tell how far we’ve come from back then according to Wawasan 2020 as it wasn’t specified how we should quantify and measure things like morality and tolerance. Perhaps the only quantifiable target mentioned in the paper is having a GDP in 2020 that’s 8 times larger than 1991 (in 1991 terms), which is about 7% growth per year. But it seems that we hadn’t hit that target yet.

There’s also a bit of a gray area with the main goal. The criteria to be a developed nation isn’t very straightforward, and we wanted to become a developed nation in our own mould… the interpretation of which is up for debate. While a survey by IPSOS had revealed that 40% of Malaysians think we’ve achieved Wawasan 2020, 38% think we haven’t, and 22% aren’t sure about it, technically they’re all correct.

Whether or not we’ve truly reached Wawasan 2020 wouldn’t have mattered regardless, as…

The government has since extended Wawasan 2020 using other Wawasans

While some of our readers might remember 1991 like it was yesterday, three decades isn’t a short time. The Wawasan 2020 plan spanned six Malaysia Plans and went on the to-do list of three different Prime Ministers. During that time, Malaysia saw plenty of development, most notably infrastructure like the Multimedia Super Corridor (MSC), Putrajaya and Cyberjaya, the Twin Towers and the KL Tower, and MEASAT 1 during Mahathir‘s time, and the Development Corridors during Abdullah Ahmad Badawi‘s time. 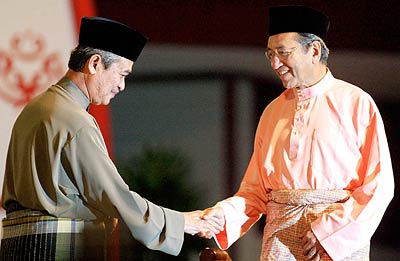 That’s the guy between Mahathir and Najib. Img from BigDogDotCom.

Then came Najib Razak in 2009, and among his most famous contributions to the plan include the 1Malaysia concept, plus a slew of transformation programs that target the country’s politics, economy, government and social sector. However, in 2016 Najib announced a new 30-year plan called Transformasi Nasional 50 (TN50), which he said will set a ‘new vision’ for the nation. TN50 was described as an initiative to shape Malaysia to be a country that fulfills the aspirations of its people, and it is planned to include both the aspirations of Malaysians from all walks of life as well as long-term predictions by domain experts.

The announcement seems controversial enough, at least for Mahathir to allege that TN50 was an admission by the government that they failed to deliver on his Vision 2020. Najib had later denied that TN50 was to overshadow Wawasan 2020, saying that it’s a continuation of the earlier plan, albeit with a different approach. TN50 was slated to run from 2021 to 2050, but while dialogues and stuff have been performed for it, in May 2018 a change of government happened, and for a while there was a bit of uncertainty on what to do next. With two years left before 2020, Mahathir, now Prime Minister again, had admitted that it won’t be possible for the new Pakatan government to go through with Wawasan 2020, due to non-compatible policies executed by the previous government.

“Even though we work hard night and day, I don’t think we can achieve it by 2020. It may take longer, perhaps in 2025 or before that if we implement the right policies,” – Dr Mahathir, June 2018, as reported by Astro Awani.

There was talk by the new Youth Minister, Syed Saddiq, that the government might consider using the findings from TN50 to draft new policies, but the extension of Wawasan 2020 to 2025 (Wawasan 2025) seemed to persist all the way to 2019. At least, until October, anyway, when Mahathir announced yet another plan called the Shared Prosperity Vision 2030 (Wawasan Kemakmuran Bersama, WKB2030). The launch of WKB2030 last October. Img from PMO.

The WKB2030 incorporated some elements from Vision 2020, but it is a lot more comprehensive, having three main objectives, 15 guiding principles, 7 strategic thrusts, and 8 enablers that contribute to its success, as well as detailed plans for some of the thrusts. This time, measurable targets are included as well, both for economic goals (GDP and contributions to it, Gini Coefficient, household income, and ratio of assets and wages between the three main races, etc) as well as plans to develop indicators for social goals, like indexes for unity, religious harmony, crime prevention, and integrity.

While it may be objectively more detailed than Wawasan 2020…

Soon after its announcement, the WKB2030 has received praise from some economists for its comprehensive and inclusive perspective on economic growth, and its goal of addressing wealth inequality across several different sections of the population, like region and race. Others, however, have highlighted possible stumbling blocks in the execution of its economic goals.

The focus on the economical aspects of the plan seem to be justified: unlike Wawasan 2020, a quick read of the WKB2030‘s action book will give the impression that it focuses more heavily on economic development and the sharing of wealth, true to its name. Where Wawasan 2020 had aimed towards a more wholesome version of a ‘fully developed nation’ in our own mould, the WKB2030 is aiming for three things: The government might do well to be wary of this difference, as although WKB2030’s aims are less vague than Wawasan 2020, at the same time it also covers less ground. As put by Tan Sri Rafidah Abdul Aziz, a member of the Economic Action Council (EAC), we need to avoid the shallow perception that being developed only has to do with having a high GDP, as a nation’s success is not just seen through its economy.

“My worry is that if we do not continuously change our attitude, and if we do not understand what is our stand on diversity in Malaysia, we will end up with a third-world mentality, constantly butting heads with each other, questioning the small matters and carrying with us the burden of old issues that need not stay until 2030,” – Rafidah Abdul Aziz, translated from Astro Awani.

Regardless of whether or not we’ll stick to WKB2030 in the future, with 2020 approaching in less than a month, Wawasan 2020 is practically over. We may not have flying cars like we dreamed about for the past decades, but it’s not really something to be disappointed about. Because while it may be nice to have tall skyscrapers and flying cars by 2020, these hallmarks are superficial at best: flying cars could be made in China, and skyscrapers could be tainted with corruption. Neither of which will make any self-respecting Malaysian ‘justifiably proud’.

At the end of the day, we won’t be walking into 2020 the same as we were in 1991. As we’ve pointed out before, we’ve came a long way since then, and we can perhaps thank the Wawasan 2020 for that. Some may think that there’s no point in setting lofty goals if they’re not achievable, but as the case of Wawasan 2020 have shown us, it’s probably better than not having set any goals at all.