Maybe not many people would remember or notice, but there’s currently an ongoing trial regarding the murder/assassination of Kim Jong-Nam, the estranged half-brother of North Korea’s leader Kim Jong-Un from back in 2017. 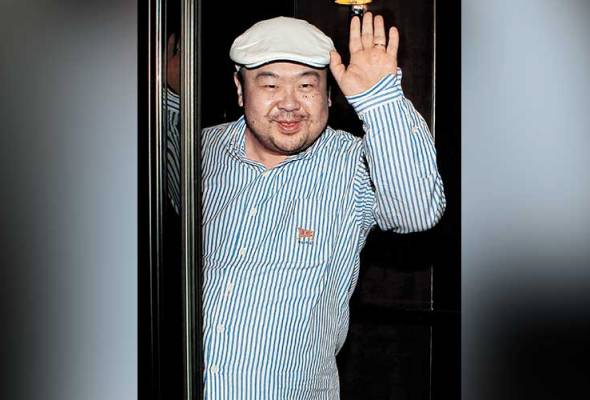 Maybe this will jog your memory. Img from Astro Awani.

Six people have been suspected of being part of the assassination, but the Malaysian government only managed to get hold of two of them: Siti Aisyah from Indonesia, and Doan Thi Huong from Vietnam. The other four were believed to be North Koreans, but they flew out hours after the hit, evading detention. Which left Aisyah and Doan to face the music in the form of a murder charge under Section 302 of the Penal Code. After two years of trials, last Monday (Mar 11) several jaws dropped when the murder charge against Siti Aisyah was dropped for seemingly no reason.

As if that wasn’t surprising enough, only Aisyah got her charges dropped, leaving Doan the only suspect left, with a possibility of mandatory death sentence if she is to be found guilty. This is kind of surprising, since…

The two women were charged for the same thing, albeit separately 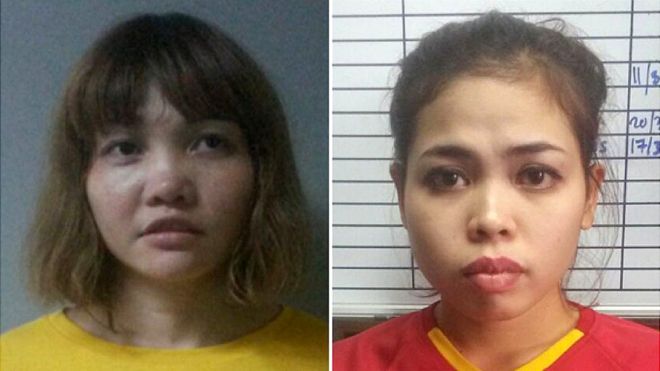 For those of you who missed the train, here’s a quick recap of what happened. On the morning of Feb 13, 2017, Kim Jong-Nam was at KLIA2 to catch a flight back to Macau. When he was near the check in desk, he was reportedly attacked by two women, and while there were different accounts of what happened, the common belief is that a banned chemical weapon called VX was applied to his face. While he managed to get some treatment from a clinic at the airport, it wasn’t enough, and he had to be transferred to a hospital. He died on the way there.

Based on CCTV footage, Doan was arrested the following day, and a few days later Siti Aisyah was also arrested. Before the incident, Siti had been a masseuse in KL, and Doan was an actress. During proceedings, they have stayed true to their claim that they were paid to prank people for a reality TV show, by the North Koreans from earlier. To that end, Doan’s lawyers had produced evidence that she had participated in prank videos for YouTube before when she was in Vietnam. Siti, on the other hand, had been seen practicing pranks at a mall before, being paid by one of the North Koreans. Doan, in a LOL shirt, from KLIA’s CCTV footage. Img from BenarNews.

Despite that, the judge was not persuaded by that argument, due to several reasons. One of them was the lack of a hidden crew and there being no attempt to bring the target in on the joke, as is the norm in prank shows. The other one is that the women were seen rushing to separate bathrooms after the incident, before leaving in taxis. According to the judge, that showed that both women knew the liquid on their hands was toxic. Prosecutors have also noted that pranks involve an element of humor, but video evidence showed that the accused were not laughing during and after the attack.

“It is an assassination, where the murder was carefully planned and executed. The element of aggressiveness was present and this alone should have negated the existence of a prank… it was not a prank and they knew what they were doing,” – Excerpts of the prosecution’s written submission, as reported by Channel News Asia.

The defence had stuck with their argument, saying that the women were nothing but pawns and that the North Koreans were the masterminds behind this. They have even argued that since the authorities couldn’t catch the real culprits behind this incident, the women have been made as scapegoats in their desperation to secure some conviction in this case. It’s worth noting that although the two women have been tried together, their cases are separate. The charges on Siti Aisyah alone had been dropped recently, and while there had been no reason given for it…

Some felt that Aisyah was released because of… pressure from Indonesia? 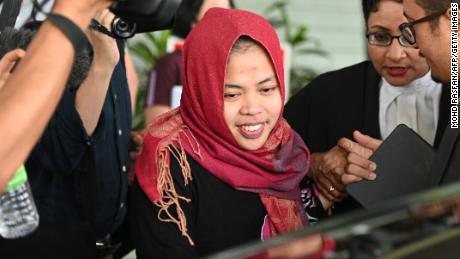 Siti Aisyah leaving the Shah Alam court after her charges were dropped. Img from Mohd Rasfan, taken from CNN.

So on Monday (Mar 11), the prosecution had informed the court that they received instructions to withdraw the charge against Siti Aisyah, saying that the decision was made based on ‘several representations’, which they did not elaborate on. An application was filed to drop the murder charge against Aisyah, and the judge granted her a discharge not amounting to an acquittal, meaning that while the charges against Siti Aisyah had been dropped, she’s not off the hook and can be called back to resume the trial if new evidence came to light.

Immediately after her release, Aisyah was escorted to an Indonesian Embassy vehicle outside the courthouse and flown back to Jakarta on the very same day, where her release got massive coverage from Indonesian news, and here’s where it gets interesting. As it turns out, the Indonesian government had been ‘intensely‘ lobbying for Aisyah’s release for quite some time already, with the Indonesian President Joko Widodo having been said to have instructed for a close coordination between several ministries and government bodies ever since the case came into being. Yasonna and Aisyah in Indonesia on Monday, Mar 11. Img from Kompas.

Yasonna H Laoly, Indonesia’s Law and Human Rights Minister who accompanied Aisyah back to Jakarta, had said that Aisyah’s freedom after two years in prison was the result of high-level diplomacy by the Indonesian government, including meetings with Dr Mahathir, the Prime Minister, as well as Tommy Thomas, the Attorney General. He had also said that Aisyah’s discharge was due to a lack of evidence to support the allegations against her.

“After studying the case thoroughly, we sent letters to the Attorney-General of Malaysia and met with him and Prime Minister Mahathir last August. Miss Aisyah was deceived and had no awareness whatsoever that she was being used as an intelligence tool of North Korea,” – Yasonna H Laoly, as reported by Reuters.

There were also reports of a letter by Thomas dated March 8, where it was informed that Malaysia has agreed to Indonesia’s request to drop charges against Aisyah. Joko Widodo had even been reported to call up Dr Mahathir to ask for Aisyah to be freed, and with the Indonesian general elections being so close (this upcoming 17th April), some were concerned that Jokowi might use Aisyah’s release to boost support for him. Aisyah thanking Joko Widodo in Jakarta. Img from The Australian.

While all this had been on the news, Dr Mahathir himself had stated that the decision to drop Aisyah’s charges was in line with the law, and that he was unaware of any negotiations between Indonesia and Malaysia on the issue.

“There is a law that allows charges to be withdrawn. That was what happened. I do not know in detail the reasons,” – Dr Mahathir, as reported by Jakarta Post.

Mmmm mmm mmm. Whatever the reason for Aisyah’s release is…

NAH, BACA:
Mahathir's secret KGB agent, plus 3 other tales about the Malaysia-Russia relationship

People have called out the inconsistent decision, so perhaps the AG needs to clarify matters 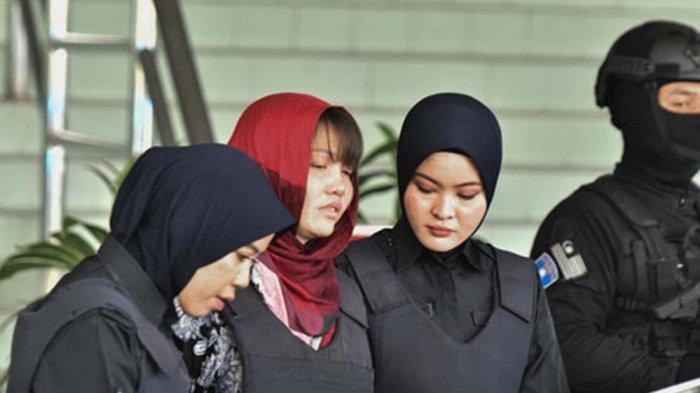 Doan leaving the Shah Alam Court on Thursday, after the court rejected her application. Img from TribunBatam.

So after Aisyah was released on Monday, Vietnam had asked for Doan Thi Huong to be released as well. However, on Thursday, the AG rejected the request, causing Doan to break down and having to be sent to a hospital for psychiatric treatment. Doan’s lawyer Hisyam Teh had told the court that the rejection was ‘perverse’ and a case of discrimination, favoring one party over the other. This is because both suspects have been charged with the same crime, and the court has found enough evidence against both that their cases can’t be dismissed (prima facie).

He had further said that the rejection did not speak well of the country’s criminal justice system.

“It is very obvious that the Attorney General has favoured one party to the other bearing in mind that this court has found prima facie case against both of the accused. Both have stated that they were doing video pranks. Both maintained they were made scapegoats by North Korea,” – Hisyam Teh  Poh Teik, as reported by the Star.

MCA’s vice-president, Mah Hang Soon, had called the sole release of Aisyah a ‘fiasco’, claiming that the independence of the Attorney General’s Chambers and its prosecutors have once again come under disrepute. Chan Quin Er, a spokesperson from MCA, had wondered whether preference for a certain race and religion had prompted the decision, as both the Vietnam and Indonesian governments had contacted Malaysia in regards to their accused citizens. As of the time of writing, Tommy Thomas has yet to say anything on the matter. Img from Free Malaysia Today.

Ramkarpal Singh, a lawyer as well as Bukit Gelugor’s MP, had said the AG’s decision to not withdraw the charges against Doan was ‘mind boggling’, and it raises questions about the AG’s powers.

“I am of the view that the charge against Doan ought to have been dropped the same way it was dropped against Siti Aisyah, if the Attorney General (AG) was of the view that North Korea had a hand in Jong-nam’s murder. Subjecting Doan to further prosecution and not her co-accused, particularly when a prima facie case has been found against both, is, with respect, unprecedented and regrettable,” – Ramkarpal Singh, to the Star.

George Varughese, the previous Malaysian Bar president, had on one hand speculated that the AG may have his reasons for not revealing the reason behind his decision, but like Fareed he had said that it would be good for the AG to give his reasons for dropping the charge, to avoid speculation.

“It may jeopardise this proceeding if he were to divulge that. I don’t know. I’m also speculating here. Like I said, it’s his prerogative,” – George Varughese, to the Star.

Doan’s lawyers as well as the Vietnam government had said that they will apply for Doan’s charge to be dropped again, and the trial is expected to continue on April 1st. But as we have said before in another article about another high-profile legal battle in Malaysia, recently the people’s trust in the judiciary has been eroded, with them being allegedly manipulated by unseen powers to do weird things for the benefit of a select few.

Rumors of the judiciary being pressured into dropping charges by foreign powers, if not addressed soon, will not do our legal system’s reputation any good. Especially since this case had attracted global attention, involving people from at least four different countries. As both George Varughese and the current Bar Council president Abdul Fareed Abdul Ghafoor had suggested, the AG should explain the inconsistency and put public speculation to rest… but as of the time of writing, there has yet to be an explanation.