[Update (10th July 2019): R.AGE just released a documentary about the Malaysian drug mule issue, which has been going on for years. Click on the pic below to check it out. Since this issue came up, we decided that we’d bring this article up again to tell you about the different kinds of drug mule cases. 🙁 ]

Malaysia cracks down hard on drugs – we have one of the strictest drug laws in the world! Not only that, drugs is still our country’s number one enemy, according to the Deputy PM. Malaysia still allows capital punishment, but only for a few crimes they deem serious enough to warrant the death penalty. Among the crimes where you can be sentenced to death is drug trafficking, treason (aka declarations of war against the Sultan) and terrorism. “Almost 2 thousand arrests for drug-related crimes involved schoolchildren and another 2 thousand other cases involved college and university students. This number of arrests was between 2014 to 2017.” – Azalina Othman, a minister at the Prime Minister’s Department, via Channel NewsAsia

But lots of times, drug traffickers prey on the innocent to help carry out their schemes. Take a look at five Malaysians who were caught being drug mules:

1. A Malaysian woman’s Nigerian boyfriend tricked her into going on a ‘holiday’ in Australia Beatrice with her boyfriend, Anthony. Img from parochialsarawakian.wordpress.com

Beatrice Laus, a Sarawakian single mom with 3 children, met her Nigerian boyfriend, Anthony through Facebook. They had initially agreed to meet up in KL after months of talking online. As soon as Beatrice met Anthony in KL, he ‘surprised’ her by telling her he had planned a romantic holiday in Melbourne, Australia.

It was pretty last minute, but Beatrice agreed. Buuut on the day of their trip, Anthony told her he was having issues with his visa and wouldn’t be able to go with her to Melbourne. He told Beatrice to fly there on her own and he’ll take the next flight as soon as his visa issues were settled. As soon as she arrived in Melbourne, Australian Customs found 1.5kg of heroin in her luggage.

Despite repeatedly denying any knowledge of the drugs, she was still arrested by police. The case was tried by Dr Mohd Rameez Yahaya, the Malaysian General Consul in Melbourne in 2011. Beatrice revealed that Anthony had packed the bag she was carrying. According to reports, the luggage was registered to her name and so the authorities held her responsible.

However, the police couldn’t find any of Beatrice’s fingerprints on the package of drugs, which showed that Beatrice was simply used as a drug mule to carry the drugs there. However, she was still sentenced to one year in jail after she pled guilty to trying to import a marketable quantity of drugs, after already serving 7 months of jail time.

2. Six Malaysians tried to smuggle drugs into HK as part of a tour group

Method: Taping packets of drugs to their bodies The drugs they seized from the six men. Img from Channel NewsAsia.

You’ve allll seen the huge groups of tourists in airports, led by a tour group leader in a vest, waving a flag and speaking into a horn loudspeaker. No one really bats an eye, unless they start causing a fuss or holding up the line at Customs.

This writer can’t remember how many times she was asked to take a photo for tourists. Gif from giphy

In November last year, 6 Malaysian men were arrested at the Hong Kong International Airport, for attempting to carry nearly RM2 million worth of ketamine into the city. HK Airport Customs found more than 8kg of ketamine strapped to the bodies of 4 of the six men (pictured above) and arrested them, but they haven’t been charged with anything pending investigations.

The men may have believed that members of a tour group would come under less scrutiny by customs officials, but they were clearly mistaken. Under Hong Kong’s Dangerous Drugs Ordinance, trafficking in a dangerous drug carries a maximum penalty of life imprisonment and a fine of HK$5 million.

3. A  teen girl was taken to South Africa and brought back a mysterious ‘gift’ Nur Dhiya Ain Rosman, aka Baby, was taken away on a ‘holiday’ in South Africa in 2010. According to her mother, Dhiya called her and told her about her holiday but quickly hung up. Her mom got worried when she kept trying to call her back, but nobody picked up, so she filed a police report. Her mom had no idea how Dhiya left the country as she didn’t have a passport, while her IC and birth certificate was still with her mother. Syabu is also known as ‘ice’ because of its appearance. Img from the Sun Daily.

In her statement, Dhiya revealed she was promised a job as a tour guide in South Africa. She was also abandoned by her friend, who was supposed to go with her.

“I was given a free ticket to spend four days with her in Cape Town but my friend abandoned me at the last minute, leaving me to travel alone. She convinced me that I’d be accompanied by a tourist guide” – Dhiya, via the Star

However, a woman approached her before she left Cape Town, claiming she was a representative of the company that sponsored her holiday. She gave Dhiya a bag, which she told her was ‘gifts’. Dhiya claimed she had no idea what was inside the bag. When she arrived at the Cape Town International airport, she was arrested by an Immigration official, 5 days after she was reported missing, as she was found to be attempting to smuggle 1.2kg of syabu out of the country.

Alwaaays check any gifts before you bring them home, gais! Gif from giphy

Dhiya was jailed in Ravensmead Detention Centre while awaiting trial. After 7 months in jail in Cape Town, Dhiya was released. Thanks to investigations by South African officials, which showed that she was simply a victim of fraud by a Nigerian syndicate. She was released on 9th March 2011 and flew home to Malaysia on the same day.

NAH, BACA:
7 times these Malaysians trolled back the people who tried to scam them

4. This Malaysian was sold off by a Nigerian man in China

Method: Sold as a drug mule after travelling to China with a Nigerian man 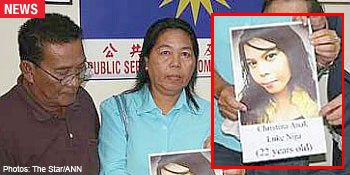 Christina’s parents at a press conference over her disappearance. Img from AsiaOne.

Christina Luke Niju was a 22-year-old polytechnic student di Kuching, Sarawak when she met an African guy known as James online. Christina lied to her mother, telling her she was going to further her studies in China and disappeared for 2 months. James had tricked her into taking a ‘vacation’ in China.

In case you haven’t noticed the pattern, a lot of drug mule syndicates are using social media sites such as Facebook to recruit oblivious people into smuggling drugs.

After 2 months of not hearing from her daughter, Christina’s parents found out from their daughter’s roommate that Christina was abandoned by James in China after he sold her for a large sum of money. The victim was stuck in China as she couldn’t afford to come home. She was then arrested at an airport in China by Narcotics Bureau of Anti-Drug Trafficking, after being accused of smuggling drugs that were hidden in her handbag – she was held at Hainan Detention Centre in Danzhou, China while waiting for her trial.

“She actually went to Kuala Lumpur to meet James before taking a flight to China. I don’t know which part of China she is in right now” – Elpedia, Christina’s mother via AsiaOne

Christina is not the first Malaysian girl to get arrested for the same crimes in China. In the same year, there were 10 cases of drug mules in China and 7 out of those 10 cases were sentenced between 15 years to lifetime in jail. One was even sentenced to death. China’s one of the few countries with a death penalty for drug trafficking, like Malaysia. Img from soscili.my

5. Even guys can kena tricked into being drug mules His MO was slightly different from the other syndicates – the student was asked to deliver some mineral water bottles to a person waiting at the airport, then take the next flight home. However, the student’s behaviour at Immigration was suspicious and Indonesian Immigration officials pulled the guy aside for questioning. They found out his flight back to KL was only half an hour from the time he arrived in Jakarta.

Definitely something fishy la! Because of his unusually short ‘visiting’ time, they searched the student. Eventually, Immigration officials found a carton of mineral water that he brought was found to contain liquid syabu. He was sentenced to 12 years jail time.

The student’s parents appealed his sentence to several Indonesian NGOs, who negotiated with Indonesian authorities on his behalf. The student successfully managed to have his sentence transferred, so he would continue his jail time in Malaysia. However, this wasn’t a case of being tricked into smuggling drugs – the student thought it’ll be an easy job, with a lucrative salary. The student didn’t even bother asking what he was carrying to Indonesia.

We won’t bore you with the ‘stranger danger’ lecture, so click here if you want to read more about how to avoid being an unsuspecting drug mule but some are pretty obvious. It’s important to be skeptical of anything that sounds too good to be true and be careful with strangers who offer you lots of money to do an ‘easy’ job. Among the stuff you can do is:

Syndicates usually target naive victims that willingly agree to carrying bags to foreign countries as they don’t realize they’re actually carrying drugs. But strangers aren’t the only people you should be wary of. Several cases of drug smuggling actually happened when the victims were conned by their very own friends. Look at Dhiya, who was convinced into taking a holiday in South Africa by her childhood friend.

If you’re doubtful of any company or person offering you a high-paying job, it’s probably best not to take the offer – it’s better than potentially being sentenced to death in a foreign country!