Recently, social media went cray cray with the new, mindblowing discovery by twitter user Aina (@nurfitriainii) about parking machines: that they don’t accept notes with Muhammad bin Ibrahim’s signature. However, after asking three machine suppliers, we found out that it is not really true la because machines cannot even read the signature!

After we found the answer to that, we spot a few other burning questions thanks to your comments (yes, we read them ok). So we gathered several burning questions and got our guys – Kevin Ong from Amano, Francis Pang from Evoxen and Vin Lee from Maxpark – to answer them. You can either watch the video below or proceed reading this article.

Let’s start with a common one…

If your money kept on getting rejected after flipping them sooooo many times, you’d probably end up crumpling it. And we know this method works like… 90% of the time. #wetried

But if Kevin from Amano told us that crumpled notes are not accepted by these parking machines, then why do the machines accept notes better in that condition??

“When we insert the notes like this or crumpled, it basically creates extra edge, backbone or whatever you call it, (which is) the reading mechanical parts tend to have more contact among top and bottom.” – Vin from Maxpark.

Just to remind y’all, we mentioned in our previous article that the machines read notes based on four criteria:

So when you crumple the notes and create extra edges, this allows the machines to read notes better by having more contact with the sensors in them. Vin also added that people will sometimes fold the notes like this… …and this method works just the same as crumpling notes!

But then again, make sure the notes are not too crumpled until the machines cannot read them la okie?

Answer: This is memang true 🙁

Another parking problem would be… receiving coins as change but cannot use them to pay parking fees! If you feel like you’ve read this somewhere, well, that’s because we’ve covered this in a previous article.

Actually, all parking machines have coin slots but most of them are blocked! 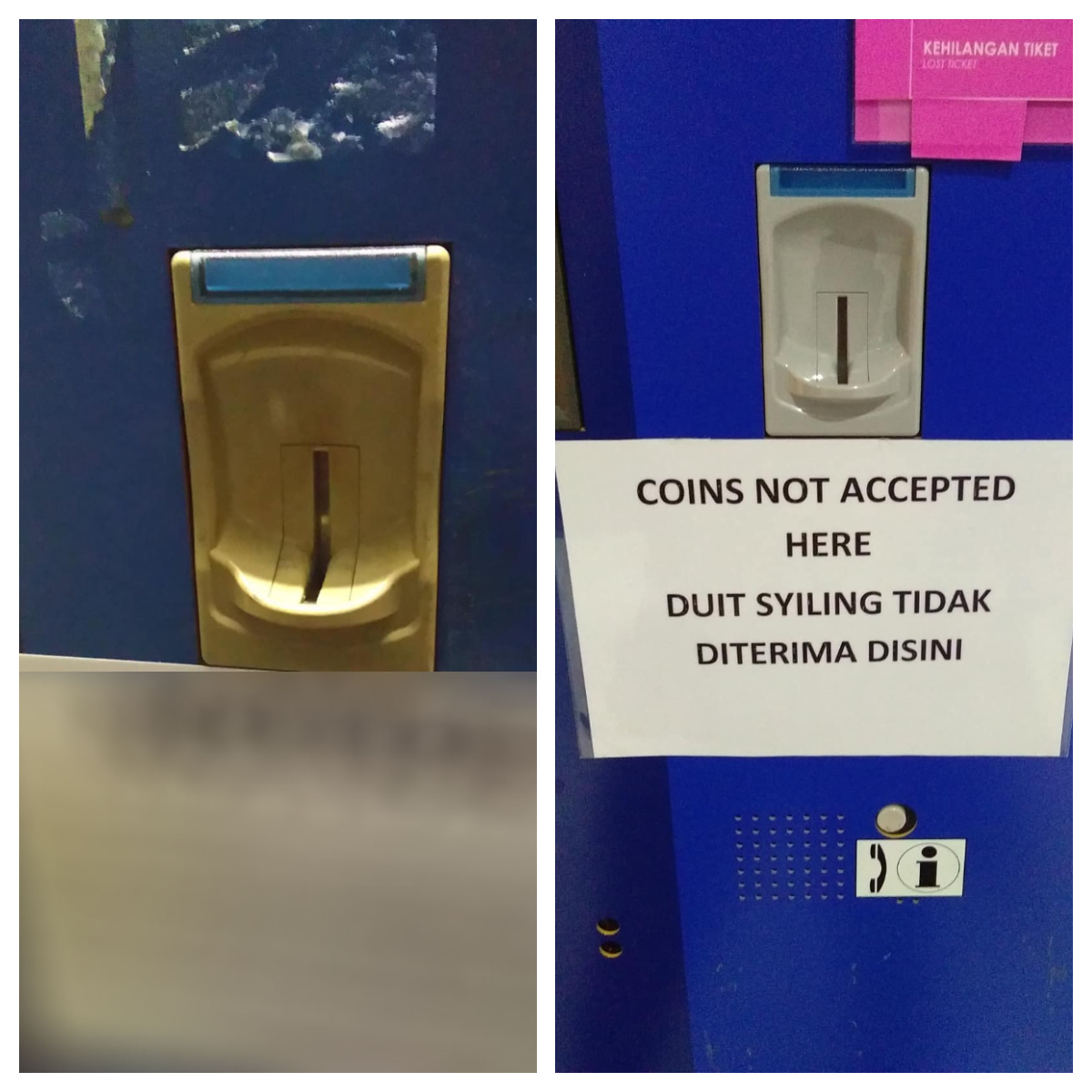 Yea, something like this. Btw these machines are at two different locations.

We’ve explained this further in our previous article so you if you’re interested to know more then click here.

3. “The infamous parking machine voice is a person??”

Answer: Yeap! And she used to work in a parking machine supplier company. The voice is sooo famous, y’all even remember what she says. Screenshot from MHaffizJ’s Twitter

If you’re wondering who voiced the parking machine, then good news! We have the answer.

“It is the voice one of our ex colleague around 10 years ago. She’s already resigned many years ago. But we still kept it for use until today and we got no plan to change it to other voices yet.” – Kevin told CILISOS.

However, we were unable to get more deets on her because she didn’t wanna be publicly known.

4. “Eh, TouchNGo makes things easier but why is it more expensive?!?!”

Answer: Yes, you’re paying for extra convenience… but some places don’t even have this surcharge!

Before we get to the answer, a poll!

If you answered no freaking way, then we get your frustration because TouchNGo is supposed to make things easier, right? You don’t have to take the parking ticket and queue to pay the parking fee. So why are you charged more (by 10% to be exact) for having an easier alternative????? “Ten per cent is not a small amount of money. Even banks pay 3-4% for fixed deposits. Touch ‘n Go should not allow these building owners to take advantage of the consumers.” – Datuk Nadzim Johan of the Malaysian Muslim Consumers Association to Paultan.

Actually, this has been debunked by Paultan sometime in 2017. According to the TouchNGo’s head of corporate sales, marketing and communication, Aina Abdullah, the 10% surcharge is the standard amount that has been agreed upon between TouchNGo, car park operators (again!?) and building owners. And, yes, you are paying for having an easier alternative.

“Touch ‘n Go only gets a certain portion at settlement and processing fees. The additional charges served as service fee for the extra convenience offered when you park with Touch ‘n Go and also to cover the maintenance & system upgrades.” – Aina to Paultan.

Apparently, TouchNGo has clarified that it supports the ‘no surcharge fee’ business model and had even tried to negotiate with car park operators and building owners. Thanks to this negotiation, nearly 20 car parks around Malaysia provide TouchNGo services WITHOUT surcharge! Here are some of the locations:

5. “Can we put our parking tickets near our phones ah?”

Answer: No because it may wipe out all information stored in the parking ticket

Ok, this may not be a common perception but some people believe that they shouldn’t place their parking tickets (or hotel cards, we explain why in just a bit) near electronic devices or magnets. According to Vin, this is true because it may wipe out all information stored in the tickets.

But before we delve deeper into that, Vin told us that there are two types of parking tickets which are those using Magnetic Stripe and Thermal Barcode. Apparently, this only works on tickets or cards with magnetic stripe. And this doesn’t only happen to parking tickets but can also happen to hotel cards and even your credit cards, according to Kevin!

“What the system does is actually encoded the parking information such as ticket number, time & date of in & out, station ID & etc into the Magnetic Stripe which is on the back of the ticket when you receive it from the entry equipment.” – Vin told CILISOS.

He added that strong magnet bars can actually erase whatever data stored in magnetic stripe tickets or cards so you may not be able to exit car park with that ticket as it can’t be read at the parking or exit machines. The same thing can happen if you put your ticket near electronic devices like your phones as they produce electromagnetic field which can demagnetize the ticket.

Buttt don’t freak out and put your credit cards elsewhere yet. Unlike parking tickets, credit cards have a higher quality and thicker magnetic stripe, which means cards like this can store information longer and will not be demagnetized easily. This is important because this stripe would eventually grow thinner with time, which can cause tickets or cards to be unreadable by machines.

That is why, according to Vin, parking tickets at places like KLIA2 tend to have thicker magnetic stripe so they’re still readable by machines by the time visitors, who normally park their cars there for two or three weeks, return from their journey.

And this is also probably why you see cases like this: 6. “Machines use the money they receive as your change??”

Sometimes you go to the parking machine and see this sign: Waitamin, does this mean the machine doesn’t have enough money for change? What about the money we use to pay the parking fees??

But there were also times where the machines would only accept small notes like RM1 or RM5. Vin told us that this happened to prevent business owners or building tenants from taking advantage of the parking machines to get small change.

“They will insert that ticket into the APS and the fare is like more than RM100, they will insert notes like RM10 or even RM50 (if that lucky Autopay Machine (APS) accept it), right before the APS collected enough, they will press cancel and hooray, the APS will return whatever they paid and return the change in coin or small notes.” – Vin

7. “Can I just walk to the ticket dispenser machine and take a parking ticket if I lose it?”

Answer: NO, this doesn’t work at all!

Say you accidentally lose your parking ticket, watchu gonna do? Simply walk to the ticket dispenser at the parking entrance and get another ticket? Can work meh??

Vin actually told us that this will not work at all! That’s cos, according to Vin, most ticket dispensers have Magnetic Loop Coil (sometimes known as Induction Loop) installed on the ground to detect metal (yea, your car) and not human flesh. However…

“Yes, metal, any metal, you can put a piece of metal size of A5 paper on top & edge of the Loop Coil after the barrier, the barrier will stays up for the few minutes until the system getting no feedback from barrier, then it will force the barrier to come down.” – Vin

Which means you can do something like this fler here and the barrier will still go up!

Besides parking lots, Vin added that you can also find magnetic loop coils at tolls and traffic lights. So if you keep on wondering why the traffic light doesn’t turn green although you’ve been waiting forever, that’s probably because it cannot detect your car. 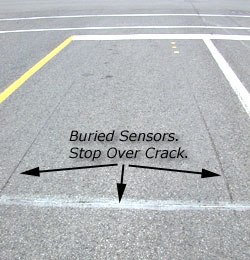 Something like this. Img from themcdonalds.net (err… not that McDonald’s tho)

There are also other systems like the Infrared Sensor, which can detect any object that passes through the sensors, and License Plate Recognition System, which scans your car’s plate number but they’re not really in use, according to Vin and Francis.

Wahlau, who knew parking can be complicated o_O

Ok ok, we know we may not have covered other questions you may have in your mind right now. But here are some other things we managed to ask the distributors: