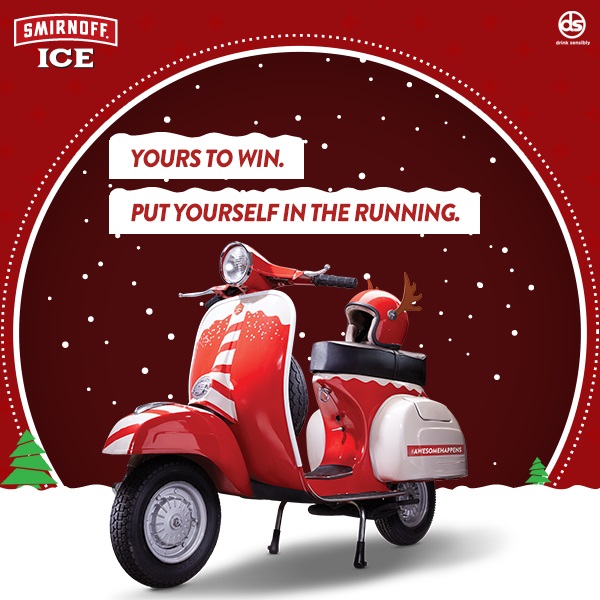 You can own this awesome Smirnoff Ice Vespa if you read to the bottom. Really one. And article also not bad.

Christmas is coming, people! This means lotsa pretty lights, lotsa jingly songs, lotsa cute Santarinas on Changkat and best of all ….LOTSA GIFTS!  However, if there’s still a kid in you, like there is in each of us here at CILISOS, then you’ll still believe those gifts are delivered by a jolly old guy with a jolly old beard in a red jumper, flying in a sleigh pulled by reindeer (which incidentally have nothing to do with rain), dropping packages to the houses of nice kids across Malaysia.

But one thing always bugged us. The thought of this angmoh fler, in thick clothes, with a bunch of overgrown kancils never seemed to ‘fit’ here in Malaysia. So two weeks ago, the nice peeps at the newly-launched Smirnoff Ice decided to team up with us and get the help of our readers. The task?

To help us figure out the things that would make life difficult for Santa here in Malaysia. And ugaiz didn’t disappoint. We received A LOT of entries for this contest, and here are the best ones. (Unfortunately, some of your ideas overlapped so we’re giving the prizes (Smirnoff Ice premiums and loads of Smirnoff Ice) to the first 7 winning entries received.)

All illustrations by the talented Dominic Chin! See more of his work here. We live in dangerous times ugaiz. With the crime rate soaring these days, you always see these signs around Then how la this…

Hope Santa’s insurance is paid up.

“Crazy ah? One Minute Its Sunny, Another Thunder Storm. Like that’s not enough, we are getting sporadic tornadoes. If day time never mind. If kena night time, habis. Santa and Reindeers lingkup.” – Hendry Rao The whole big-fat-man-in-a-red-coat has always bothered us. TAK PANAS KE? Poor guy has to visit 5 million households (leaving out soccer hooligans, Facebook trolls and Ridhuan Tee) in one night wei. And his sleigh doesn’t look like it has AC.

Also, when it isn’t frickin hot, we got some serious weather issues yo. Those reindeer look pretty tough but we’re not sure if they can escape a full blown Pandamaran tornado. And if there isn’t wind or shine, then of course there’ll be the haze. Good luck finding the right house to drop your presents in.

“Even though everyone knows santa doesn’t really fit in to the chimneys here, there is just no heating apparatus that even resembles a chimney here.” – Marcus PMBro Speaking of dropping presents in. HOW? Malaysians got no chimneys wei. So no choice la the fler gotta try either a window or a backdoor. EXCEPT, with the aforementioned crime-rate these days, and a suspicious-looking guy entering your house with a big sack… you’re gonna have a bad time.

“He needs to tell the guards which house he wants to go to and the guards will have to call the house and check if he is a stranger or not. Confirm cannot deliver gifts…” – Charis Tan Chimney kenot, window kenot then how? Go by road lor. Which these days, inevitably means going through a security gantry, which means convincing one of our dear Bangladeshi or Myanmarese friends to let you in. Unfortunately, this is how we foresee the conversation going.

5. Being Mistaken as the God of Fortune Hmm. Red, fat, and with old-fashioned facial hair. Why does that sound so familiar. OH RIGHT.

Either our God of Fortune is gonna be very confused, OR, Santa will be wondering what’s wrong with Chinese kids these days who don’t want toys, but just money.

“Jabatan Perhilitan would never approve the use of his reindeers, especially on the Federal Highway. The closest he could use is a Kancil  which is in the deer family too :)” – Esther Teo Lately, it hasn’t been a good time to be an animal in Malaysia. Double that with the fact that it’s hard getting a permit for anything these days, and you can see that Santa might need to find a new form of transport.

“Have you tried navigating through KL jams without Waze? I bet they haven’t caught on to the name change yet making it quite a merry chase that Santa is going to face!” – Sumitra Selveraj Oooh, ok for this one, we got about 20 entries with the same idea. As you might know, very recently a whole bunch of road names were changed. For a foreigner who comes every year to his usual haunts, you can imagine how this might be very confusing. Worse still, when people vandalise the current road signs. Let’s hope this year one of his elves gives him a GPS-enabled smartphone (yes we checked – Google has updated its maps).

Yep, that sounds like a pretty good idea. Which is why for this year’s Christmas, Smirnoff Ice decided it’s about time for a revamp. Cue drumroll please… Not only is this year’s Awesome Santa much more appropriately dressed, but he’s driving a VW Kombi this year, which as we’ve said before, is  one of the most sap-sap ways to get past neighbourhood security.

AND he’s gotten a pretty good headstart, visiting various bars in KL, Johor and Penang, giving out gifts of duh… Smirnoff Ice with his team of adorable Santarinas.

And he wants to give you Malaysia’s most awesome Kapchai

Awesome Santa has one final stop left. On the 19th of December, he’ll be at Bricks & Barrels Hartamas, giving away this AWESOME Reindeer Vespa, complete with Reindeer Helmet, by just buying a bucket of Smirnoff Ice at Bricks & Barrels anytime from now till the party. Each bucket you buy will entitle you to a contest entry, and the winner will be announced at the Smirnoff Ice Christmas Party later this week. Here are the details.

Thanks to everyone who participated in the contest!

Merry Christmas, and to all… an AWESOME NIGHT!