Aside from 1MDB, BR1M is probably the other most famous four lettered abbreviation in Malaysia. BR1M, less famously known by its full name Bantuan Rakyat 1 Malaysia, has become more of a meme than a government initiative on the Malaysian social media. 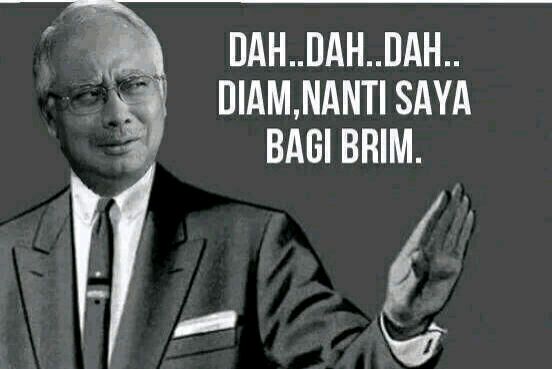 Exhibit A. Image from lowyat.net

During the reveal of the BN manisfesto for the upcoming election, UMNO President and BN Chairman Najib Razak announced government plans to double the remaining handouts for BR1M this year if BN is re-elected.

Some people think BR1M is just a ploy by BN to buy over voters, while others like Bank Negara Malaysia and the government itself (of course) said that it is a necessary and helpful policy. But before we go any deeper, let’s first clarify how BR1M handouts are actually distributed.

Could you actually be qualified for BR1M without realising it?

According to the BR1M website, there are 3 categories of Malaysians who qualify for the handout:

Those eligible have to apply for the BR1M handout (which you can download here), and for category 2 and 3, their money is paid across 3 intervals in a year. For this year, it will be as follows: Remember when we mentioned that the handout would be doubled previously? BN was referring to the the June and August payout, meaning that families in category 2 will get RM1,500 instead of RM 900, and families in category 3 will receive RM2,000 instead of RM1,200. On top of that, BN is also promising to extend the initiative to households with income between RM4,000 – RM5,000!

But that’s not all! If you’ve successfully registered for BR1M between 1 January 2018 and 31 December 2018, your heir is entitled to a received a certain amount of money thanks to a bereavement scheme tied to BR1M (the form for that can be found here). Now that all that is clear, we can now talk about why…

To understand why Bank Negera Malaysia (BNM) said this, we have to travel a little back in time, to the conception and introduction of BR1M. According to BNM’s media release, the idea of BR1M was first incepted in early 2011 by BNM’s Board of Directors to the Prime Minister. The goal, was to help the government effectively deliver financial assistance to the more deserving groups.

If you remember, there was a time when the government helped reduce the burden by subsidising basic goods like oil, sugar, and petrol. Later, they slowly reduced the amount they were paying for subsidies, before removing some of them completely. As you would expect, the bulk of the subsidies was for subsidising fuel, which stood at RM24.8 billion in 2014, compared to just RM3 or 4 billion “long ago”.

While surging prices was a factor in stopping subsidies, it was also because they decided that subsidies were a horrible way of easing poor people’s burden. To prove the case, just imagine how much fuel could an average Malaysian spend on petrol, as compared to the owner of a logistics company who owns 20 something trucks? In the end, blanket/universal subsidies end up benefiting the intended group less. So in that sense, BR1M benefits the poor more than subsidies. But how does that help “make the economy better”?

In 2016, the private consumption sector grew on an average of 7.1% between 2012 and 2015. The Finance Ministry seems to think that it’s thanks to the low income group, as BR1M handouts are giving them more money to spend on consumer items. A few hundred ringgit per family might not seem impressive, but together, its a total of RM6.8 billion ringgit (based on 2018 numbers) that’s potentially being injected into the sector.

NAH, BACA:
5 scary things in Bajet 2016 that may not help the rakyat at all

But surely, there are better ways to use that money than to give it away directly?

When BR1M first started in 2012, there was only 1 category of eligible recipients, and the government distributed around RM2.9 billion to 6.8 million recipients. Fast forward to 2017, the government is spending about RM6.9 billion for 7 million households, with an increasing number of recipient categories, and other incentives. Considering the timing of when BR1M is introduced, some can’t help but criticise that it was an effort to buy votes on the government’s part, similar to the controversy that arose when Urban Wellbeing, Housing and Local Government Minister Noh Omar was simply handing out money to parents during a function at a school on February.

Image from The Malaysian Insight

The argument is: Wouldn’t simply handing over money just make its recipients dependent (or “lazy”, in other words)? Shouldn’t money be properly channeled through programs, grants, and incentives or things like that? For example, providing free textbooks/ tuition classes for children from poor families. As it turns out, there are pros and cons for both direct/ unconditional cash handouts and conditional incentives/ programs.

Among the weakness of incentives is that it would incur more cost due to monitoring and record keeping on the authorities’ side. Incentives also can’t directly address the problem of a low income household, as different families might need money for different reasons, e.g. a family with sick children might need money for medicine instead of textbooks. With direct cash handouts, the family can (hopefully) decide appropriately what to spend on.

“Although for some people the aid is little, but to us it is very meaningful…I use this money for emergencies such as medical expenses for the children,” – Hayati Mohamad, 54, single mother told Malay Mail Online

“People like me have no one to depend on…with the help of BRIM, some of my burden is eased and this also shows the government’s concern for the people. I hope the aid will be increased in the future,” – Maimun Alias, 60, senior citizen told Malay Mail Online

“BR1M is used to buy basic food items like sugar, flour and cooking oil. It helps a bit in buying food and supplies for the kitchen, but it will all be used up in a week.” – Noriah Mahmud, 53, supporting a family of four told The Malaysian Insight

So while we could argue that the money might be more effectively distributed, there’s no doubt that BR1M is a welcomed relieve to those who are qualified to receive them.

To truly help the poor, BR1M will need to evolve beyond cash handouts BNM says that eventually, there would need to be “an exit“, and BR1M will have to be linked to promotional programs to enhance “human capital and productivity“. In other words, BNM wants the low income group to be trained and equipped with the knowledge and skills that they would need to find employment in the modern market force.

“Broader fiscal, structural and social policies including on the labour market and education, are key in shaping the adequate level and coverage of the social protection framework.” – quoted from BNM’s press release

This proposed “social protection framework” would probably look similar to the Employment Insurance Scheme (EIS). If you haven’t already known, the EIS is a government scheme to not only compensate workers who unexpectedly lost their jobs, but also to help them get back on their feet through training and job seeking on their behalf.

For now, BR1M seems to be like a band aid, an immediate but temporary solution for poor Malaysians to cope with the rising cost of living. But someday in the future, BR1M will need to transform into something that’s much more than that. Anyway, let us know what you think about BR1M in this poll: