We know that firecrackers are illegal in Malaysia, but every CNY we still hear BING-BANG-BOOOOOM late into the night. Who could forget few nights ago the warzone that was the ninth day of CNY (Hokkien Pai Ti Kong)! On top of that, people sell many different types of firecrackers in pasar malams. But the most common one we often see is Pop-Pop – any grocery store sure can find, walk into KK Mart also can get. If they’re banned, how come businesses sell them so openly?

Ok ok, don’t angers, ugaiz. We know fireworks have been a CNY tradition for centuries. They’re tons of fun and beautiful to watch, more importantly, they’re culturally and religiously significant to people. In fact, it’s not only CNY, firecrackers are played by all Malaysians during Hari Raya, Deepavali, Christmas and even New Year as well. Anyway, we looked into the legality of it and found out that…

There are only two types that won’t land you in jail!

According to a 1987 news clip, firecrackers were banned in Malaysia in 1969, after the racial riots. In this aspect, we beat Singapore by banning it three years earlier, HAHA! Throughout the 47 years, we discovered only two instances of the ban being lifted: that time when that news clip reported it in 1987 and again in mid or late 1990. The Home Ministry (MOHA) has the power to ban or un-ban, where fireworks are concerned.

The law on firecrackers is found in the Explosive Substances Act 1957. Generally, it covers all kinds of explosive stuff, including gunpowder, bombs, rockets and so on. So yeah, firecrackers contain explosive material, usually flash powder or black powder.

And it’s usually contained in a plastic or cardboard body. Image from wonderopolis.org

But it turns out that MOHA allows TWO types of fireworks… 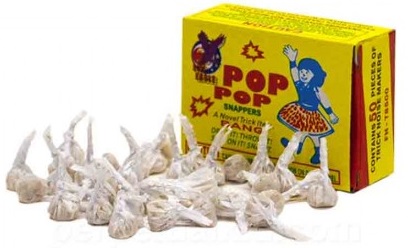 Because they’re totally safe and won’t cause any physical harm, even if it explodes against the skin. Pop-Pop is made up of a small amount of gravel (or course sand), 0.08mg of silver fulminate, twisted up in cigarette paper. On impact, the silver fulminate causes a tiny explosion, but the ratio of gravel to explosive is super high, so it acts as a buffer.

Watch this kid test it out on his own hand:

So kids still get to enjoy popping stuff safely and cheaply too! You can get five boxes of Pop-Pop for only RM2. In the whole world, Pop-Pop is only illegal in Singapore, Canada and New Jersey, in the US.

Wuut?? This is hardly a firecracker D: Image from sixthseal.com

OMG remember this toy!? At first we weren’t sure if MOHA was referring to bomb bags because there are so many different types of Happy Boom firecrackers. Sixthseal.com wrote that ‘Happy Boom’ is a very generic name for firecrackers and it’s used to describe everything from bomb bags to Happy Boom salutes. When we Googled ‘Happy Boom’, the results also showed sparklers and the dynamite sticks.

Then we found an article by Sinar Harian of cops showing samples of the two permitted firecrackers. Pop-Pop is very recognisable la, but the other one, we’re not sure coz picture so blur: Click to enlarge. Can ugaiz see anything? Image from Sinar Harian

To us it looks like bomb bags la. They don’t look like sparklers or rockets right? Let us know if we got the wrong Happy Boom in the comments.

But bomb bags are definitely simple, harmless toys. To play with it, you squeeze the packet, throw it on the ground, then it will expand and explode. They contain small amounts of Sodium Bicarbonate and Citric Acid Monohydrate, which are common household chemicals. Worse come to worse, they will only irritate the skin and eyes la if you terkena. Generally they don’t pose any danger and can’t be modified to become more dangerous.

For everything else, need to get permit from the Home Ministry Aww man, potong stim! Pop-Pop and Happy Boom tak syok la compared to the rest. Everything else is definitely illegal – popular ones in Malaysia being papan, bola, eggs, rockets, ketupat and mercun bola (considered the most dangerous one). Initially we thot mebbe sparklers allowed, but we found many images like this one, where cops rampas. OMG the cops even seized 1Malaysia firecrackers once, WTH! Before you call MOHA to ask for a permit, let’s set the record straight here. Unfortunately, it’s not just simply for the random public to apply just so they can light a few for a birthday party in their garden. Only events, concerts, or formal gomen events where there’s a pyrotechnics expert to oversee things can jalan. That’s why KLCC and other shopping malls can display fireworks during celebrations.

NAH, BACA:
Why is the gomen de-registering an opposition party... right before a key by-election?

What is a pyrotechnics expert? Well, it has to be someone who is a Malaysian citizen, has a certificate of pyrotechnics expertise, no criminal record, and not someone from a security force or in the Malaysian uniform force. We found a company called Blastmaster who offers this service.

Taken from Blastmaster’s product section. These are some events at Putrajaya, Lumut, KLCC and KL Tower

Rules are pretty strict concerning fireworks. Even after getting a permit and an expert to ignite firecrackers, the event must be supervised by the police, bomba and Public Aviation Department.

Chup, if big firecrackers are banned…why my neighbourhood still BADDABOOM every year? Image from funky_girlz41 on Photobucket

It’s quite easy to buy firecrackers, even for kids. The Star reported that certain shops sell them quietly to customers, but more shockingly, they’re sold out in the open in pasar malams and Ramadan bazaars. Traders say there are various suppliers in Ipoh, smuggled from China and Thailand, or online syndicates.

“They won’t catch us as long as we sell the fireworks in small quantities. I don’t sell fireworks that resemble hand grenades. Those, we will get caught for.” – trader at a Tanjung Rambutan market told The Star Kids checking out a firecracker stall. Image from The Star

So what’s the punishment if someone is found with firecrackers? Section 8 states that he/she can be jailed for seven years or fined RM10,000, or both. It doesn’t specify buyer or seller, as long as you are ‘found to be in possession of’. Technically you could get the same amount of punishment if the cops stumble on your stash, versus you snatching someone’s handbag.

Even for Pop-Pop and Happy Boom, Terengganu police chief Datuk Rosli Rahman said people still need apply for a permit from MOHA to import and sell them. Otherwise, Malaysians are not licensed to manufacture or sell any firecrackers at all. Once upon a time, there used to be fireworks factories in Malaysia, but after two major tragedies (Bright Sparklers factory explosion in 1991 and another fireworks factory in Beranang, Selangor exploded in 1992), the authorities shut down all fireworks factories. Screenshot from Gabriel Pudun’s YouTube video showing the Bright Sparklers incident. The explosion killed 26 and injured 103 people. It was the worst chemical disaster in the country

Very tragic! Not surprising that the authorities set laws against it. Got cases of police arresting sellers la (here, here and here) and Kastam flers cracking down. One thing we noticed tho, is that there are no reports of authorities arresting buyers or people playing them in housing areas, though it’s stated in the Minor Offences Act 1955, that burning fireworks can land a person in jail for a month or fined RM100, or both.

Perhaps, kids today are not aware of how horrible those tragedies were, but more importantly they don’t know the dangers either. The authorities are always reminding parents to be more careful with their kids, yet we often read about awful accidents like these (WARNING, link has graphic images).

Safety aside, there’s also the case about being a public nuisance. While logically most people play fireworks at night (cos can see mar), some continue into the wee hours of the morning. In fact, the blasts went on till 5.30am at our Editor’s housing area the other day! It was incredibly frustrating for residents, especially those with frightened children and pets.

We understand people might not want to let go of culture, but what do ugaiz think? Culture vs safety vs civic responsibility?

Interestingly, many countries that once lighted fireworks for cultural or religious reasons, have banned it. For example, China (banned in many cities in 2015, due to air pollution of all things), Taiwan (since 2008), Hong Kong (since 1967), and of course Singapore. However in India, where fireworks are used during Diwali celebrations, it is still legal.

In the end, it’s like the DVD situation in Malaysia. Everyone is aware it exists, but we close one eye je. Well, if you insist on playing with firecrackers also, do take these precautions. Stay safe, ugaiz!