For those of you who like action/spy movies, the term “Swiss bank account” would probably be familiar to you. Switzerland has always had the reputation (in movies at least) of being THE place for bad guys to store money.

As a huge vault of gold under some mountain guarded by Smaug. Image from gorillafilmonline.com

While there may not be that many espionage missions actually taking place in Switzerland, the banks over there are actually known for their secrecy. Back in 1934, Switzerland passed the Swiss Banking Act which made it illegal to disclose the identities of account holders to the authorities.

“A depositor’s true identity will be known to only a select group of employees, and in order to withdraw cash or make a wire transfer, the account holder is asked for a codeword.” – Columnist Juliette Garside, in an article for The Guardian Which is a breath of fresh air, especially when all we hear on our side is the above. Click for an “investigations are ongoing” article!

And so it may have come as a surprise to many when the Swiss Attorney-General released a press statement the other day, saying USD4 billion may have been misappropriated (seems to be a really atas word for stolen) by Malaysian gomen linked companies, all of them related to 1MDB in some way.

“So far four cases involving allegations of criminal conduct and covering the period from 2009 to 2013 have come to light in this connection (relating to Petrosaudi, SRC, Genting/ Tanjong and ADMIC), each involving a systematic course of action carried out by means of complex financial structures.” – André Marty, Head of Information of the Office of Attorney-General, Switzerland

Which can only lead us to ask: why would one of the most secretive countries in the world bother to investigate us? Well, the answer may have something to do with the fact that Switzerland made some changes to their banking laws in recent times.

So in the past few years, there has actually been a lot of discussion about Switzerland ending their bank secrecy laws because of international pressure. Initially most countries didn’t really bother about the Swiss’ banking laws but that’s been changing in the past few years. 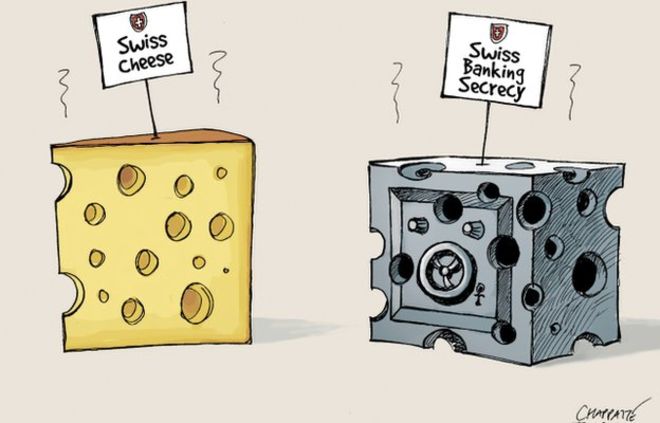 As Malaysians would say it, sudah bocor. Image by Chappatte but taken from BBC.

“The international environment has changed drastically. It started with the (2008-2012) financial crisis, which in its second phase led to a surge in public spending and a massive drop in revenues. Governments tried hard to find money to fill the holes in their budgets. Tax evasion used to be tolerated and all of a sudden there was a global consensus that it should be prevented.” – Aymo Brunetti, professor of economic policy and regional economy at the University of Bern, as quoted by swissinfo.ch

And that led to a lot of things happening in the next couple of years, like the tax agreement between the Swiss and 60 other countries in 2013, and plans to implement measures to give out info on tax evaders without having to be asked by a specific country. In fact, Swiss banks have even been fined millions (like here and here) for helping people evade taxes.

These however, are purely in regards to tax evasion. On the other hand, they have also been doing a lot to combat money laundering. As far as Swiss AG press statements are concerned, last year the Swiss were involved in 2 very big cases of money laundering. The Petrobras scandal (a scandal involving a Brazil gomen owned oil company), and the FIFA scandal (for football fans, you may remember this as the scandal that led the FIFA President stepping down). Both which show that it looks like Switzerland isn’t a place to keep any kind of illegal money anymore.

But that’s just the beginning because in November last year, the Swiss gomen even announced that they had adopted new anti-money laundering rules and that it would come into force in Jan 2016. Well not quite. Because as it turns out, their interest in 1MDB may have started a few months back.

You might remember an article we wrote a while back about a particular UMNO member who had been travelling the world to make police reports about 1MDB. And his name is Khairuddin Abu Hassan! Image from The Malaysian Insider.

One of his stops was actually Switzerland. He quite literally went to the Swiss AG in August last year to give them evidence of 1MDB doing wrong stuff in Swiss banks. And to be honest, this writer himself didn’t believe that the Swiss would bother to do anything about it. 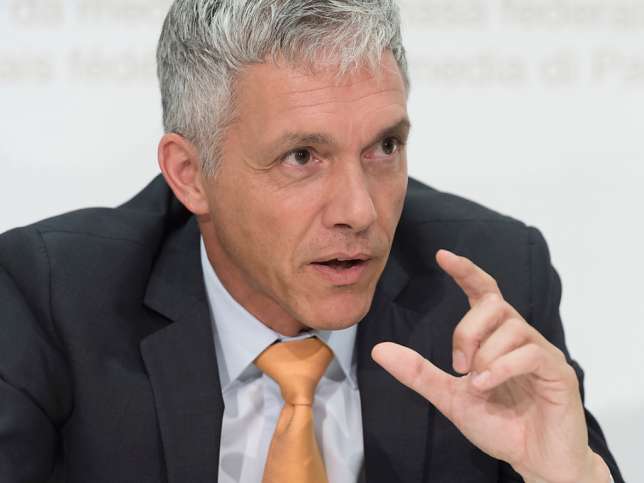 Who would’ve thought that just 2 weeks later, the Swiss would actually end up freezing “bank account assets amounting to tens of millions of dollars”. Fast forward another 2 more weeks and the reports were that Swiss AG Michael Lauber had met with our AG, Tan Sri Apandi Ali, to discuss “mutual cooperation” in regards to investigating 1MDB.  We can’t say for sure that Khairuddin himself kickstarted all this, but the timing couldn’t be more chun if it wasn’t him la.

NAH, BACA:
Malaysia is the 9th most popular tourist destination in the world?! But there's a catch

And all that possibly led up to what happened a few days ago when they released the press statement about the USD4 billion that was allegedly transferred into bank accounts of former Malaysian officials. They have also said that they would be giving us crucial evidence to help with our investigations.

“The OAG is hopeful that our colleagues in Malaysia will examine the evidence we have gathered and provide us with further assistance, as the two attorneys-general agreed last September.” – The Office of the Attorney-General of Switzerland, in an email to The Malaysian Insider

OMG are the Swiss trying to get our AG to investigate Najib again?

“In the ongoing criminal proceeding of the OAG, Mr. Najib Razak is not one of the public officials under accusation.” – Andre Marty spokesman for the Office of the Attorney-General in Switzerland, as quoted by Nikkei Asian Review Truth be told, the whole press statement by the AG doesn’t in any way mention that PM Najib is involved at all. Here’s why.

“So far it has been ascertained that a small portion of the money was transferred to accounts held in Switzerland by various former Malaysian public officials and both former and current public officials from the United Arabic Emirates.” – André Marty, Head of Information of the Office of Attorney-General, Switzerland

More specifically, the Swiss are looking for “two former officials of the Malaysian state-owned fund 1MDB”, which rules PM Najib out of the picture because he’s not a former official, he’s still an official. To be fair, the recent news about our AG clearing Najib of the RM2.6 billion charges weren’t even the same case because Najib says he got them from someone in the Saudi Royal Family, not 1MDB.

Are the Swiss really interested to see justice served?

Actually, it’s not just the Swiss. A few days after the news about the Swiss AG, there were reports of Singapore investigating accounts related to 1MDB in their banks, and the French charging a businessman involved with Malaysia’s submarine purchases, with having some illegal dealings with a Malaysian official linked to Najib.

Which makes it seem like there are a lot of people out there who suddenly want to bring these cases to justice. Well we can’t say for sure, but consider this, it was reported that the main reason for the Swiss making changes to their laws was because they were trying to avoid being put on something called the tax haven blacklist, a list of territories blacklisted by the European Union as part of their crackdown on multinational companies that are trying to avoid taxes. And as we found out, both Singapore and France have also, at some point or another, been regarded as tax havens.

But regardless of the motives, here’s how our leaders have taken it. E.g. Our DPM Zahid Hamidi, and Communications and Multimedia Minister Salleh Said Keruak. So the Swiss AG’s statement has actually gotten a few people riled up about bringing these things to light. Cos you know they brought this thing to…light… Unedited image from lifehacker.com.au

“Making a public statement, in my opinion, is not a proper move. Not only it could strain ties between two countries but also lead to bias in media reports.” – Deputy Prime Minister Ahmad Zahid Hamidi, as quoted by MalaysiaKini

But this was how the Swiss responded.

“We can’t comment because the OAG is independent from the government. The government also does not comment on open criminal proceedings.” – Swiss embassy in Kuala Lumpur, as quoted by MalaysiaKini

The Swiss AG has also said that it would not respond to political statements. Which makes sense, because this isn’t a political investigation on one of our leaders, but on former 1MDB officials. So while the motives may be unclear, they do seem to be committed to seeing this through. And for now, maybe that’s all that matters.