Shortly before Raya week, one of our readers staying in Kota Kemuning, Shah Alam sent us a very creepy video.

OMG right? Like freaking “Rise of The Planet of the Mosquitoes”, and enough mosquitoes to make a trilogy!

Some of you may have heard that dengue cases have been on the rise recently. The Ministry of Health announced that between June 26 and July 2 this year, dengue cases rose by 13.5%. In fact, our very own writer UiHua was hit by dengue last week (and he’s currently still on leave). So out of our own personal interest and concern…

WE. WENT. THERE. OURSELVES.

One of the residents, Pei Chyi, was kind enough to take us around the area.

“I’ve been renting an office here for 6-7 years, and this car park has always been abandoned.” – Pei Chyi, a resident of Kota Kemuning

She added that there were 2 other car parks in the area but those had been renovated and commercialised. So she couldn’t understand why this particular car park remained abandoned. But as far as mosquitoes go, she said they only started becoming a problem recently.

The video above was shot by another resident, Mr. Lim Thai Kwang, about four days before we arrived on the scene. The Star (who also did their own report on the car park) said that it was currently in the process of being leased out to a furniture company and they would repair the car park when the details were finalised.

So with that info in mind, we readied ourselves with mosquito repellent all (and some other miscellaneous stuff) and entered the forbidden city that was this Kota Kemuning car park. But when we got there….THERE WERE NO MOSQUITOES TO BE FOUND! Where were the mosquitoes that The Star was talking about?!

Don’t believe us? Just check out the semi-exclusive CILISOS footage:

*Cue X-files music and don’t ask why our editor is wearing that Doraemon…headgear, cos we don’t know either.*

OMG where da heck did all the mosquitoes go to?

So feeling a bit confused, we first assumed that there may not have been any mosquitoes there at all. There were a lot of bugs alright, but they looked more like something you find in your toilet after forgetting to wash for a few weeks. 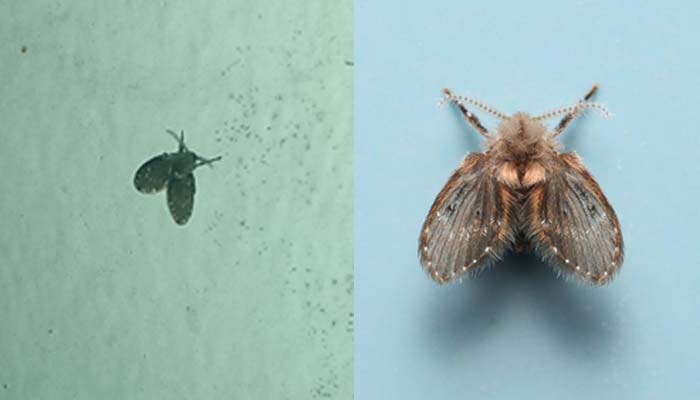 After comparing with some pictures on Google, we believe that the insects we found were something called a drain fly. So we theorised 2 possibilities on why we didn’t see mosquitoes:

So what did we do next? We asked Mr Lim whether or not they were mosquitoes, and here’s what he told us…

All the mosquitoes are already dead!

“The Klang Health Department came and killed all the mosquitoes already.” – Mr Lim Thai Kwang, in an interview with CILISOS

So according to Mr Lim, he actually shot his original video on the Monday before Raya. And after seeing how bad the car park looked, he quickly got in touch with the Ministry of Health, which in turn transferred them to Klang Health Department. The Klang Health Department actually said the car park was the responsibility of Majlis Bandaraya Shah Alam (MBSA, because Kota Kemuning is actually in Shah Alam).

But Mr Lim tells us that when he sent over the videos and pictures he had taken, they came to the car park on that same day itself to fog and poison the crap out of the water. Mosquito larvae begone! Cos those are apparently dead mosquito larvae. Image from Mr Lim.

We didn’t mention that the water was actually really smelly, like the smell of a thousand wet socks that have been left in a washing machine for centuries. So while the mosquito problem had been dealt with, there was a still a large mass of water in need to being….disposed of.

But as we were writing this, Pei Chyi, (our guide from earlier) told us that when she went to the car park on Thursday morning (14/7/16) the water was almost all gone! Image without sparkles from Pei Chyi.

Mr Lim told us that after the Klang Health Department came and got rid of the mosquitoes, they told him that the water was now the responsibility of the Majlis Bandaraya Shah Alam (MBSA), and the next day he met a few people from MBSA preparing to do just that.

At time of writing we’ve been unable to reach MBSA to confirm if they’re the ones who cleared the water, (and hopefully MBSA would get back to us soon), but the point is the water is no longer there and Pei Chyi even told us that the stench is gone.

So despite it taking 5 years to this issue to be solved (or semi-solved), at the very least now there is one less breeding ground for mosquitoes in Kota Kemuning.

What to do when YOU find similar legions of mozzies in your taman?? Cos you know, mosquito paradises like this exist all over the country. Image from The Star.

Unfortunately at time of writing, we were unable to get a hold of MBSA to clarify these things. But we did get in touch with someone from another city council, Councillor Sean Oon from Majlis Bandaraya Petaling Jaya (MBPJ).

He told us that in the event there is a large volume of stagnant water in the area, or a building that ends up becoming a health hazard, it is the responsibility of the city council to deal with it, EVEN IF the property belongs to someone else.

“One of the options is to demolish the building. We could also bring the property owner to court and get a legal notice for the owner to do something about it.” – Councillor Sean Oon from MBPJ, in an interview with CILISOS

He also tells us that if it’s mosquito related, their policy is that they would have to take action within 24 hours. And seeing how this situation was dealt with fairly quickly after Mr Lim made the report, maybe it does pay off to report things like these to the authorities after all.