So, the Covid-19 vaccine is finally here! Just in case you’re not aware, we’re currently in the first phase of vaccination since the 24th February 2021. Yea, that was when Muhyiddin went on national TV to get himself vaccinated. But how can we talk about Covid-19 vaccines without acknowledging those chain messages we’ve been receiving on WhatsApp or Facebook claiming this and that about the vaccine? Y’know those messages from conspiracy theorists claiming that the vaccine is agenda Illuminati/Yahudi or that the vaccines have microchips to stalk and control us.

While these messages seem silly to most of us, there are some people out there who fell for them. So, that got us thinking – what kinda data will anyone get from tracking Malaysians?

Disclaimer: this is a SYOK SENDIRI article, so do NOT take any of these points seriously. Except for the conclusion part la, ok?

After scouring Twitterjaya, we found some really interesting answers on what the Yahudi/Illuminati/person who owns the microchip will find when tracking Malaysians. 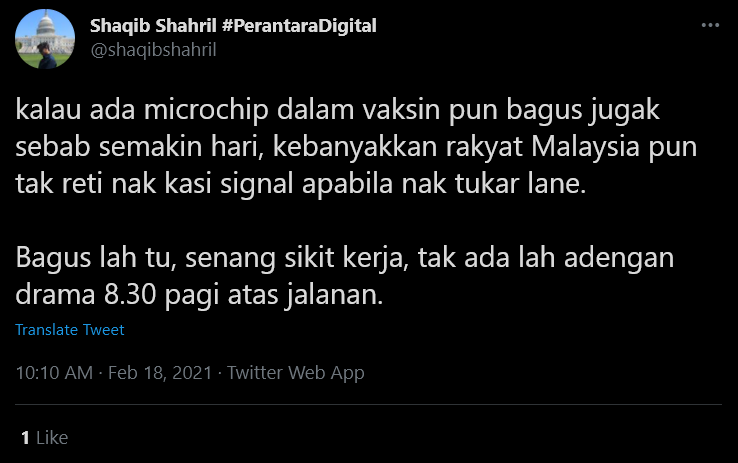 Apparently, he’s not the only one on Twitter who says this. A few people on Twitterjaya said the same thing too and they’re probably among the 77% of people from our previous survey who get annoyed with drivers who switch lanes without signaling. In the same survey, we also found out that those who don’t give signal are abang-abang who drive locally-made cars. 2. Everyone in Malaysia is FAMILY!

That’s one way to confuse the Jews/Illuminati. Screenshot from @thenamesivory Twitter

3. But for some reason, Malaysians always gaduh online 😤 4. Don’t be ashamed to order the WEIRDEST food combo ever 5. Meeting at 9am? Just come in half an hour later

It’s either that or Malaysians are always OTW. Screenshot from @thenamesivory Twitter

Aside from the Malaysian timing, the Jews/Illuminati would also learn that Malaysians are hard workers… or overworked people(?). 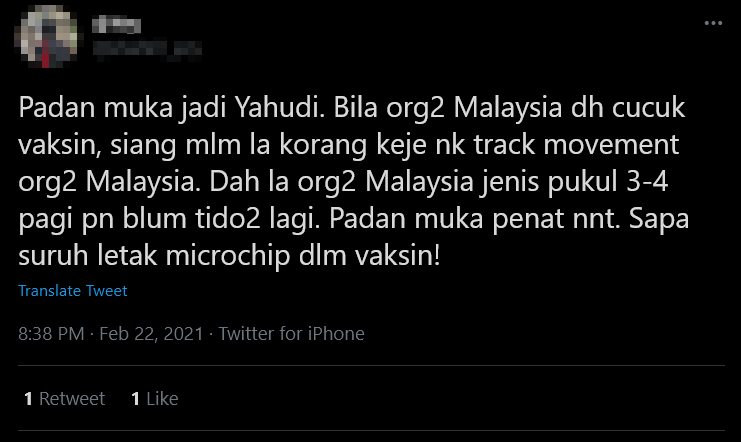 6. Malaysian moms can be pretty scary *yahudi has left the chat* But to be fair, Malaysian moms may be scary for a good reason la, especially if you’re a couch potato. 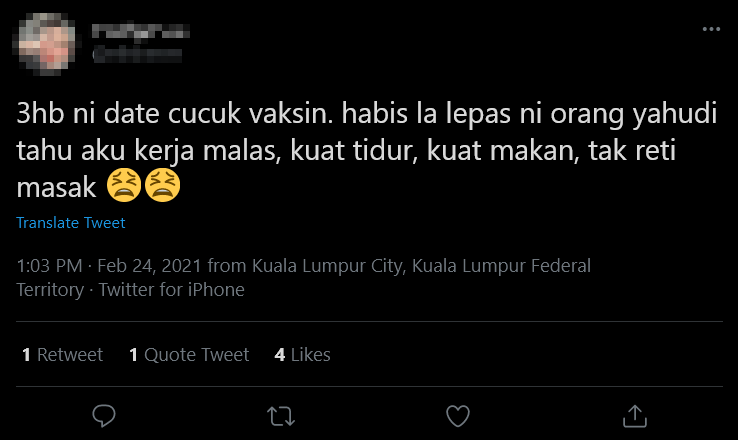 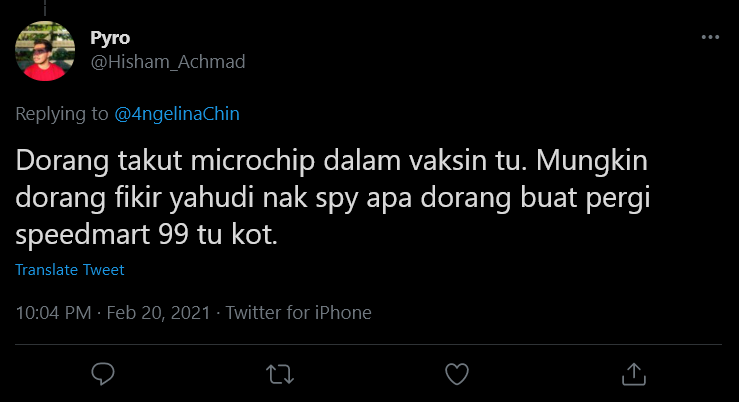 We got in touch with Hisham (the guy who posted the tweet above) to find out what he meant by his tweet. Although he said it was just something that crossed his mind, it also seems like he came up with his own uhh… stonks theory??

“Maybe when the Jews see how cheap the prices are in 99 Speedmart, they’ll export cheaper stuff to Malaysia. Many investors will then want to invest in Malaysia by opening stores that sell items cheaper than 99 Speedmart, creating more job opportunities and increase the purchasing power in Malaysia.” – Hisham to CILISOS. This is probably how Hisham felt after explaining his tweet to us. Img from Know Your Meme

NAH, BACA:
[UPDATE] Who is this angmoh whose viral video was featured by BERNAMA? If you’re wondering why your fellow Malaysians are counting buses, that’s because they’re participating in the latest TikTok trend called the #10buschallenge. It’s basically a challenge where you count (in Malay) 1 bas, 2 bas, 3 bas up to 10 bas without saying sembilan belas or dua puluh. You can give it a try if you wanna.

But Malaysians aren’t only good at maths.

9. Jews find out we know their EVERY move

As you may have already known, Malaysians are a bunch of detectives. Remember that time when Malaysians found deets of Kiki, the girl who went MMA Fighter mode after she attacked a car with a steering lock?

So it may not be surprising if the Jews/Illuminati would discover how Malaysians will know THEIR every move before they even think of it!

Hol’ up. Aren’t they the ones stalking us? So, who’s stalking who now?? But that’s not the only thing they will find out about us. The Jews would probably find out that, just like some people, some Malaysians are fans of conspiracy theories. Assuming you’ve gone through all the points above, you would realise that it may not be worth anyone’s time to stalk Malaysians.

Besides, if you’re scared of being stalked by the Jews/Illuminati/random person who allegedly puts microchips in vaccines, then you might wanna throw your phones out. This is considering how we discovered in our previous article that WhatsApp and Facebook might be hearing your conversation.

But jokes aside, y’all really gotta stop spreading fake news about all these theories. Not only would it scare people off from taking vaccines whilst making it hard for the govt to ensure that we achieve herd immunity in our society, but you can also be punished for doing so! The Deputy Inspector-General of Police Datuk Seri Acryl Sani Abdullah Sani reportedly said that the police won’t hesitate to open up investigation papers on those that create and spread fake news about the Covid-19 vaccination. And this includes your exciting conspiracy theories too.

“Investigation papers will be opened should police receive reports on the issue. The case will be investigated under Section 505(b) of the Penal Code and Section 233 of the Communications and Multimedia Act 1998.” – Acryl Sani to NST.

If you’re found guilty, you can be prisoned for two years or fined, or both. So, the next time you wanna convince people not to take the vaccine, you might oughta take a step back and think before doing so.

In the meantime, don’t forget to practice social distancing and verify your news on sebenarnya.my to stay safe from both viruses. Yes, we’re talking about the Covid-19 and fake news.

Tweets are compiled by Ivory Anne and Sabrina Noor.