While we were enjoying our city lives and getting outraged by the latest thing our politicians can say, there was a major showdown happening in the deep jungles of Sabah that was about life and death. The life and death of these guys. Image credit to horizonhotelsabah.com

In the north eastern part of Sabah is the Lower Kinabatangan Wildlife Sanctuary which is one of the last natural homes to a large population of orang utans, pygmy elephants, and other endangered animals such as the hornbill and the proboscis monkey. Key word…ENDANGERED. Often called the ‘Corridor of Life‘, it was gazetted as a wildlife sanctuary in 2005 to become a natural habitat for these animals, as well as to prevent illegal poaching and human encroachment.

So when news of a certain bridge was going to be built got around, it was called by local conservationists ‘A bridge of extinction‘, and it got the attention of local and international conservationists, including Sir David Attenborough. If you don’t know who he is, we’ll you’re bound to know his voice… He’s one of the most popular documentary narrators of ALL TIME:

And you will also recognise Sir David Attenborough’s brother as the guy with the mosquito walking stick in Jurassic Park.

So why is one of nature’s biggest, and often silent, advocate care so much about a bridge being built in Sabah?

What is the Sukau Bridge all about? (and seriously… another bridge?)

Back in 2008 as part of the 9th Malaysia Plan, a RM232 million project was included to build a network of roads and a bridge in the Sukau area close to the Kinabatangan river. The project was split into 2 phases, with a bridge costing RM67 million, followed by additional ramps and road to the bridge.

The bridge is expected to join Sukau with the coastal villagers at Litang and Tomanggong, some 40 kilometeres away where about 1,000 villagers live. Other than to stimulate the economy of the area, the bridge is meant to improve the connectivity of the people living there to a vital infrastructure; healthcare!

According to Sukau’s assemblyman, Datuk Saddi Abdul Rahman, the villagers had to travel for 2-3 hours to get treatment from the nearest towns of Lahad Datu or Sandakan. This has caused the deaths of 10 people, including pregnant women, who were unable to receive medical attention on time. With the Sukau bridge, it is possible for them to get help from Sukau’s medical clinic in less than an hour. Sound familiar?

It kinda reminds us of the story of Dashrath Manjhi, an Indian man who chiselled away a small mountain, so people didn’t need to travel 70km to get around it. Why did he do that? Because his wife had died because she couldn’t get medical care on time. Dashrath Manjhi and the mountain he chiselled.

Eh, but if it will save lives, why are environmentalists don’t want the bridge?

The problem lies in the proximity of Sukau to the Lower Kinabatangan Wildlife Sanctuary. Sukau is considered as a hotspot for 300 pygmy elephants on their migration, thanks mainly to the plentiful food and water there. Researchers based in the sanctuary have noted that if the roads and bridge were built, it would pose a threat to one of the largest populations of pygmy elephants in the state.

The Danau Girang Field Center (DGFC), which is a research center that has been observing and monitoring elephant activity since 2008, noted that the location of the bridge would CUT into the last uninhabited migration route of the 300 pygmy elephants. This not only endangers the elephants, but also humans alike as interaction between them is bound to increase… Trust us, it’s NOT like Disney’s Jungle Book, where man and elephants sing and march together :-S Elephants have attacked humans when they come into contact, particularly when a male is sexually active, which not only resulted in crops being destroyed but also human lives lost and elephants that are too aggressive could be put down.

For years, elephants have been killed for their tusks by hunters. One of the most notable case is when an elephant with a rare sabre-tusk was found dead and its tusks removed, five months after it was fitted with a satellite collar to track its movement. 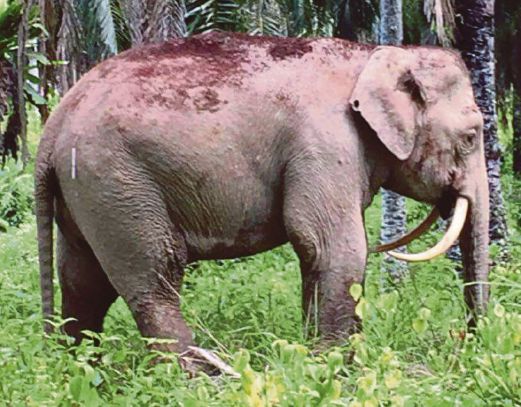 According to DGFC Director Dr. Benoit Goossens, based on the data collected from 14 of those elephants through satellite collars, and even from data in the past 12 months from 2016, he firmly believes that the bridge would have an impact on the elephant population.

“Looking at eight years of data collected from 14 elephants along the Kinabatangan, I can already predict massive conflict in Sukau where elephants will be killed, people will be killed, and the government will lose millions of ringgit mitigating these conflicts.” – Dr. Benoit Goossens, quoted in The Sun Daily There are reasons to protect the elephants. Not only does the bridge make it easier for poachers to enter one of the largest congregation of the elephants, but it will also hurt the eco-tourism of Sukau, should the elephants be compromised.

According to the state’s Ministry of Tourism, Culture and Environment, Sukau has the most successful homestay programme in the state which earned more than RM25,000 a year for the villagers. The eco-tourism along the Kinabatangan alone is able to generate RM160 million a year.

So how did environmentalists manage to put a stop to this? If you’re familiar enough with protests against developments, you’ll know that they don’t always end successfully. Such was the case of the protesters who fought to no avail against the East Klang Valley Expressway (EKVE) in 2016. In a separate case, TTDI residents are also currently fighting tooth and nail against a high-rise development near the much-loved Taman Rimba Kiara.

So how did environmentalists succeed in putting the Sukau Bridge development down?

Local NGOs such as WWF -Malaysia, eco-tour operators and local elephant experts went on to voice their objections against the bridge, started petitions and gaining media attention. Although it managed to delay the project for a year, by February 2017 the construction was about to go ahead, pending an approval of its environmental impact assessment (EIA) report.

As news of the bridge and its potential damage continued to spread, it gradually attracted the attention and criticism from environmental NGOs around the world from the United Kingdom, Honduras, Argentina, Zambia, Ecuador, Armenia, Chilie and even Vietnam.

Then in March, Sir David Attenborough and another wildlife presenter Steve Backshall were reported to have written a letter to Sabah’s chief minister to voice their disapproval of the bridge and urged it to be scrapped.

“I have had many encounters with the magnificent and unique species with which your state is blessed. […]

If this construction is allowed to go ahead, I am left in no doubt that the bridge will have significant negative effects on the region’s wildlife, the Kinabatangan’s thriving tourism industry and on the image of Sabah as a whole.” – Sir David Attenborough, as quoted in The Guardian The bridge not only had environmental groups concerned but also private companies. Upon hearing the news of the Sukau bridge, the Sime Darby foundation began considering if it should pull out from further conservation investment in the region! The foundation had already spent RM8 million in various conservation projects in the Lower Kinabatangan, including restoring riparian forests with their partner, Nestle.

Lastly, there was even objection against the bridge that came from the state government itself when a minister from the state’s Ministry of Tourism, Culture and Environment was also convinced that the bridge would be a bad idea.

“The scientific evidence is clear, the bridge will follow a route through the Sukau area which has the largest concentration of elephant movements…It will be very irresponsible of the authorities to knowingly brush off these facts,” – Sabah Tourism, Culture and Environment Assistant Minister Datuk Pang Nyuk Ming, quoted in The Star.

To build or not to build? The hard question is whether the human life that could be saved by the bridge is worth the economic, reputation and animal lives that could be lost if the bridge was built. Sigh! Sukau assemblyman Saddi Abdul Rahman had called out on the environmental NGOs on their objection to the bridge:

However, the DGFC had questioned whether the completed bridge and roads would have benefited anyone at all.

“For the past 20 years, residents of the villages of Lintang, Dagat, Parit, Tomanggong and Seri Ganda (all located south of the Kinabatangan) have been using the Jeroco road to go to Lahad Datu…

It would be wiser to upgrade existing roads than to build a new one that will primarily benefit plantations. About 95% of people living in Sukau township already have direct access to the Sandakan highway without the need for a road bridge.” – Dr Benoit Goossens, quoted in New Sabah Times.

Although an alternative was proposed to build a RM150 to RM170 million viaduct over the elephant’s migration route (similar to the one in this CILISOS article!), the proposal was met with skepticism by environmentalists for its effectiveness and waste of funds to build something that was unnecessary.

A viaduct is when roads are built on raised columns over the animal’s migration route rather than paving them on the ground that could break the animal’s route. By April 20, during the South East Asia Rainforest Research Partnership (SEARRP) dinner at the Royal Society in London, it was announced that the state government had decided to scrap the Sukau bridge project altogether!

“In making this decision, Chief Minister of Sabah Datuk Seri Musa Aman has taken into consideration all the concerns and opinions expressed related to the bridge, including those from Yayasan Sime Darby, Nestle, scientists and NGO groups and also the opinion of someone who knows the territory better than anybody else – Sir David Attenborough,” – Sabah Forest Department chief conservator Datuk Sam Mannan, as quoted in The Star.

While this is one victory for those who believe that environmental damage should not be the price to pay for human development, but it only marks that this is and will continue to be a never ending fight for those who want to preserve Sabah’s wildlife treasures.

It is not up to just the environment NGOs to fight for them, but it takes a concerted effort from all local stakeholders (private companies and state government) and also global support behind them to win these battles.