Everyone loves a good murder mystery. Well, we here at CILISOS are no different, and we love having ourselves a bit of korek-korek detektif™ every now and then to distract us from the drama that goes on in our country. Whether it’s Canny Ong, or Nurin Jazlin, or Altantuya, we Malaysians are always invested in murder mysteries that the media sells us.

However, no story engages any aspiring korek-korek detektif™ more than Jack The Ripper, the granddaddy of serial killers. Jack The Ripper’s version of ‘drop the mic and walk away’. Image from: tntdownunder.com

Jack The Ripper is the guy (?) who was generally believed to be the culprit behind several gruesome murders in London in the late 1800s. All of his victims were working-class women and their bodies were severely mutilated. The most intriguing part? He was never caught or identified.

Yes, that’s right. Even till today, people are still trying to figure out who did it. Countless theories have been thrown around. Some say it was a doctor, some say it was a butcher, and the Netflix series ‘Penny Dreadful’ came up with this cool narrative that Jack the Ripper was actually a werewolf played by Josh Hartnett. But in reality, no one is any closer to solving this baffling crime than they were in the 19th century; there are actually over a hundred hypotheses about the Ripper’s identity!

As luck would have it, a WEEK before we launched the article, scientists were able to somewhat confirm Jack the Ripper’s identity as prime suspect, barber, Aaron Kominski, but DNA evidence has been shown to often be wrong….

Besides, we already found another reallyyyyyy interesting theory, which says that…

Jack the Ripper may have been… a Malay cook.

Disclaimer: Okkkk so before ugaiz start putting on your tinfoil hats and going all ‘konspirasi Yahudi/Freemason/Illuminati/*insert political party here*’, keep in mind that to this day, no one really knows who actually did it, and we’ve only got circumstantial evidence-based theories to go on, so take all of this info with a pinch of MSG yeah?

This theory has been running its rounds around Reddit, and has actually gathered quite a huge following among Ripperologists (people who spend time investigating the Jack the Ripper case).

Sounds random, we know, but what really caught our eye was THIS newspaper article: Why is this article significant, and what does this have to do with Jack the Ripper? Well, to answer these questions, we first have to look at another serial killer mystery in Austin, Texas, that happened before Jack the Ripper’s. This unknown killer was sensationalised in the press as ‘The Servant Girl Annihilator’, and was America’s first real ‘serial killer’. Some of the headlines about the Servant Girl Annihilator from the 1880s. Image from: Mental Floss

Our story begins in November 1888, in Austin, Texas…

… when the editor of a local Texan newspaper received a curious letter from someone pointing to a Malay cook named ‘Maurice’ (possibly angmoh lingo for Mat Rais or Mat Deris, according to this Singaporean news columnist) as the culprit behind the Servant Girl Annihilator killings, which had terrorised the citizens of Austin, Texas from 1884-1885.

According to that letter, this Mat, who had somehow found his way to Yee-haw country, was signed on to work at the Pearl House hotel in Austin, Texas in 1885.

Around the same time Maurice was hired, a young black cook named Mollie Smith had been found dead in the snow near her tauke’s home. What drew public attention was the state the body was found in: a gaping axe wound in her head and stab wounds in her chest, abdomen, legs and arms. It was so gruesome that she ‘appeared to almost be floating’ in her own blood! 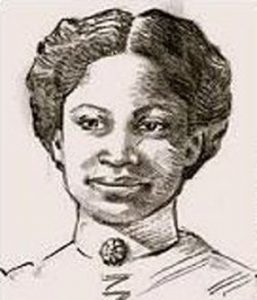 Artist’s rendering of Mollie Smith. Image from: Under The Lone Star

And it didn’t end there. Soon, Eliza Shelly, another black cook, was found dead with her head nearly split in two with an axe. The killings would continue in this fashion, mostly targeting lower-class black women (with the exception of one upper-class white woman), and all in all, 8 people were brutally murdered and left in various forms of disfigurement, similar to Mollie and Eliza. The unknown killer was given the name ‘The Servant Girl Annihilator’.

Meanwhile, Maurice suddenly found himself as a prime suspect in the Servant Girl Annihilator killings because of the timing of his employment, and the fact that all the killings happened within the tiny radius of the Pearl House hotel. However, he left the job and disappeared about 3 weeks after the last murder.

The weird thing is that when he left, the killings stopped, and The Servant Girl Annihilator case remains unsolved to this day.

The police actually had Maurice under surveillance right before he disappeared, which could have prompted him to cabut lari. According to several newspapers of the time, Maurice, who usually worked on ships, had allegedly told associates that he was headed off to London for a fresh start (remember this bit, because it’ll come up again later).

… when a sailor named George M. Dodge met a Malay cook named ‘Alaska’ (possibly ‘Laskar’, an old Malay word for ‘sailor’) at the Queens Musical Hall at Poplar. The following is what he claimed Alaska told him:

“… (he said that) he had been robbed by a woman of bad character, and that unless he found the woman and recovered his money he would murder and mutilate every Whitechapel woman he met.” – quoted excerpt from ‘The Encyclopedia of Unsolved Crimes’

He also claimed that Alaska was about 35 years old, 5 feet 7 inches, weighed 10-11 stone (around 63-69 kg), and sometimes carried a double-edged knife, which he showed George. On the 31st of August 1888, Jack the Ripper would claim his first victim: Mary Ann Nichols, a prostitute who worked in Whitechapel.

And, similar to the Servant Girl Annihilator, ALL 5 of the Ripper’s victims would follow a pattern: lower-class women within the radius of Whitechapel, deep throat cuts, severe body mutilations (except in the case of Elizabeth Stride, presumably because Jack heard people coming and fled in a hurry), and organs removed.

NAH, BACA:
The strange story of a M'sian MP who allegedly killed his rival with black magic in 1982

With each body found, the mutilations got more and more gruesome, and the body of the last victim, Mary Jane Kelly, kena chop kao kao until like daging masak merah (don’t click this link if ugaiz have a weak stomach!). In October 1888, Mr. George Lusk, who was the President of the Whitechapel Vigilance Committee (basically their version of Rukun Tetangga), received a crudely-written letter from an unknown source, widely suspected to be Jack the Ripper. It read:

Mr Lusk,
Sor
I send you half the Kidne I took from one women prasarved it for you tother piece I fried and ate it was very nise. I may send you the bloody knif that took it out if you only wate a whil longer
signed
Catch me when you can Mishter Lusk”

Aaaaaand, attached with the letter was a preserved piece of an actual human kidney.

Previously Scotland Yard had received several letters from people claiming to be Jack the Ripper, but this was one of the few that actually received serious attention, cos, well, human organ included. 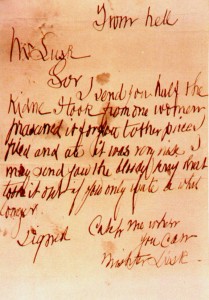 The ‘From Hell’ letter. Image from: Wikipedia

A poorly-written letter mentioning a cooked kidney, and accompanied by a piece of an actual human kidney. Could this have been Maurice/Alaska the Malay cook? No one has the answer. But what we do have are several witness testimonies describing Jack the Ripper.

Did Jack the Ripper actually look like a Malay cook/sailor?

No one actually saw the Ripper doing his haram work, but there were witness testimonies of sightings of the alleged perp talking to Elizabeth Stride right before she was found dead, which described him as:

“… a stout man of about 5 feet 6 inches tall wearing a black cut-away coat, dark trousers, and a cap that was “like something a sailor would wear”… ” – William Marshall, witness

“… the man had a dark complexion and a dark moustache, wearing a cutaway coat and dark trousers and carrying a parcel wrapped in newspaper.” – PC William Smith, police constable/witness

“… he shouted ‘Lipski’ to a second man… he had a full face, was broad shouldered, and wearing a dark jacket and trousers with a peaked cap.” – Israel Schwartz, recent immigrant/witness 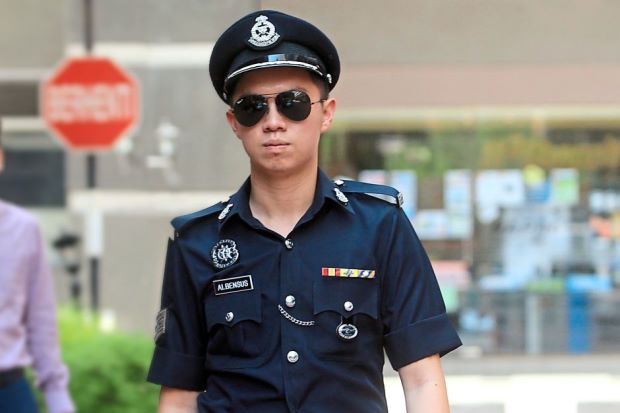 That’s a peaked cap, in case ugaiz were wondering. Typically worn by sailors, military officers, and of course, our own abam polis. Image from The Star

(Note: No one is sure what ‘Lipski’ means, but when we first saw it we thought ‘cepat sikit’? Dunno, just a guess :p)

Remember that bit of info about Maurice heading to London that we told ugaiz to remember earlier? Back in Texas, the author of the Statesman actually follow-ed up on that same lead and tried to contact Maurice in London. Before he could reach him, however, he discovered that Maurice had cabut lari-ed yet again!

And yet again, once Maurice had disappeared from London, just like with the Austin killings, the Whitechapel killings stopped too…

But… this theory could actually have been born from racism

We’ll be really honest: we still don’t know who did it. No one does. There’s no way to know if Maurice and Alaska are indeed the same person, OR if they even did either of the killings, OR if any of these testimonies are 100% reliable, despite the consistencies.

It’s also possible that the whole Malay cook theory could’ve stemmed from racist stereotypes, as the Malays of the time were thought to be keris-wielding gengsters who used to terrorise local angmoh populations. In fact, we found out that the English term ‘running amuck’ actually comes from the Malay word ‘amok’ (i.e. ‘mengamuk’) cos apparently that’s what crazy Malay dudes in those days used to yell when attacking people! And their perception of Malays was pretty bad. Just check out this quote from the Pall Mall Gazette, dated 10th of October 1888:

“The Malay race are extremely vindictive, treacherous, and ferocious, implacable in their revenge, and on the slightest provocation, or imaginary insult, will commit murder… A Malay thinks himself wronged by society, or he is bankrupt and cannot pay his debts, or otherwise. He will be revenged; he grasps his Kris handle and stabs a man in the heart, and runs on, stabbing at everyone he meets, until the cry of alarm and warning, ‘Amok, amok!’ being raised, he in turn is stabbed or otherwise despatched. Hence it is called running a-muck. Which is, in fact, the Malay fashion of committing suicide. He knows that death must be his immediate lot, but he only wants to score as many victims as possible to his own steel before he is killed on the spot fighting, and not reserved for death on the gallows.” – Pall Mall Gazette, 10th October 1888 (click here for full article)

In any case, no matter how plausible or implausible this theory may seem, because of how long ago it was, a lack of forensic evidence, plus the fact that there’s no one alive who can verify these claims, we may never know for sure who Jack the Ripper really was.

But in all honesty, it would be pretty cool if Jack the Ripper turned out to be a Mat from Malaya who decided to run amok in Britain.