“If you don’t do that (vote for Pakatan), in three years’ time, Sarawak will go bankrupt. This year, Sarawak’s state budget is RM11bil. Every year, it’s RM11bil, in three years you have nothing left,” – Lim Guan Eng, as reported by The Star.

Okay, maybe we need a little context on this. First off, that was said at what we assume was a pretty lit DAP fundraising dinner in Kuching. Second, he was talking about the Sarawak state gomen planning to spend a whopping RM11.91 billion for its state budget this year, the highest ever in the state’s history.

Third, the budget was drawn up by Sarawak’s ruling coalition, the Gabungan Parti Sarawak (GPS), made up of Sarawakian parties who left BN after GE14.

Fourth, Sarawak has RM31 billion in reserves, so a simple projection of RM11 billion a year would show that Sarawak would run out of money in about three years.

All good? Great! Now on to the fifth: the quote, coming from Malaysia’s Finance Minister, caused quite a bit of an uproar for several reasons, and the first one we’ll be looking at is…

Just nudge the wheel a little if you’re a state. Gif from Gfycat.

So, we put ‘bankrupt’ in quotes because it’s not quite the right term to use.

Just as a person can go bankrupt by not being able to pay their loans, a state/country can face the same situation and go into default, like what almost happened to Greece. Much like your own finances, a state’s budget, is a matter of balancing between income (revenue) and spending. Within a year, if a state

It’s not uncommon for our states to be in deficit: as of last year, Perlis has a deficit of RM71.99 million, and Lim had claimed that Pahang’s debt had reached RM3.18 billion (with RM1.27 billion in arrears).

As of the time of writing, both states have yet to go Mad Max.

Tryna get some ikan patin masak tempoyak at Temerloh be like… Gif gtom Giphy.

Even Malaysia had been running on a deficit for several years already, according to University Malaya’s Economics and Trade Expert Dr Fatimah Kari, and ain’t nobody calling Malaysia bankrupt. And while there are disadvantages to being in deficit…

“If this debt grows, it can pose dangers on two fronts. First, it must be paid with interest and secondly, inability to control budget deficit will lead to difficulty in raising funds. Eventually this points out to further increase in interest rates that will indicate riskiness in any economic system.” – Dr Fatimah Kari, to the Borneo Post.

…it’s not the end of the road for a state as long as it’s managed well. Dr Fatimah pointed out that even if Sarawak went into deficit, they could keep adding the deficit to the state’s debt for a long time, and it would still be manageable as long as the interest remains low.

So unless say a meteorite wiped out Sarawak and they had to borrow massive amounts of money to pile land into the crater and rebuild it from scratch, they probably won’t go ‘bankrupt’ within three years. As for Lim’s calculation based on Sarawak’s remaining reserves… Sarawak wasn’t even planning to touch their reserves in the first place. If you look at Sarawak’s budget speech (on page 41), you’ll find that they plan to earn RM10.51 billion next year, which is more than their planned expenditure of RM10.39 billion. But where will all these money come from? Here’s a simple breakdown:

It’s pretty much the same as the previous years, except that this year they’re planning to earn an extra RM3.897 billion (almost 40% of the total revenue) in a new category: sales tax for petroleum products. And this new category popped up shortly after the tabling of Malaysia’s 2019 budget.

See, despite Pakatan promising to give Sarawak a more fair share of the national budget, when it was eventually announced Sarawak only received a RM10 million increase from previous years. That probably won’t go very far towards the huge state’s development. For perspective, this expensive bridge near the Sultan Ismail LRT station cost RM14.2 million. Img by Choo Choo May, for Malay Mail.

Several Sarawakian politicians and activists (naturally) voiced out their disappointment on the matter, and some from the gomen (naturally) retaliated against them. Among others, Anthony Loke, the Transport Minister, had said that those criticizing the Budget should remember their part in it.

“Though facing a huge amount of debt, the central government today maintains that Sarawak receives the same allocation with an addition of RM10 million… However, I want to remind those who criticize the extra RM10 million that they (the state government) is also part of the reason the country is damaged, for supporting a corrupt Prime Minister,” – Anthony Loke Siew Fook, translated from Berita Harian.

We’re not sure how much aloe vera sales went up after that, but several days later Sarawak announced a new way to increase their income… by imposing a 5% sales tax on their petroleum and its products, starting 1 January 2019.

As it turned out, Sarawak and Sabah have a special, totes legit power to impose a States Sales Tax, and since Sarawak had already imposed it on things like palm oil, lottery tickets and tyres… why not petroleum products as well?

NAH, BACA:
New species discovered in Sarawak is being called the "World's Most Beautiful Spider"

The move and the resulting increased budget was lauded by many from Sarawak, with some calling it as the beginning of Sarawak’s financial independence, and others calling it a ‘daring and courageous move‘ on Sarawak’s part.

Since then, there had been a little back and forth between Sarawak and the Federal Government, with Lim saying that the new sales tax will make Sarawak’s petroleum products less competitive and Sarawak’s Chief Minister Datuk Patinggi Abang Johari Openg standing firm on the sales tax.

“Why should we sacrifice ourselves and our right to impose sales tax? Under the constitution there’s no capping (on the sales tax rate). We can even impose 10% but we consi­dered the economic environment and just impose 5%,” – Abang Johari, to the Star.

Ooh shots were fired. But anyway…

Even before the sales tax, Sarawak seems pretty stable, money-wise

So far, despite having a reputation of being underdeveloped, Sarawak seems to be handling its finances well. As we’ve mentioned in earlier paragraphs, while some states are struggling to bring down their deficit, Sarawak managed to save up RM31 billion in their reserves, despite claims of being shortchanged by the Federal Government.

They were ranked third in terms of investments last year, having managed to bring in RM8.6 billion, only falling behind Johor and Selangor. Agencies like Standard and Poor’s and Moody’s Investor Service was said to have ranked them even higher than Malaysia for the past decade.

People from other states listening to Sarawak blowing their own blowpipes be like… Gif from Tenor.

Sarawak’s Deputy Chief Minister Datuk Amar Awang Tengah Ali Hasan had mentioned that things are looking good for Sarawak this year based on the many MoAs and MoUs already signed with interested parties. With the new sales tax in effect and more sources of revenue on the way (like plans to sell electricity to West Kalimantan), it would seem that Sarawak’s days of depending on the Federal Government for development funding are coming to an end.

With all these being said, why does Lim make the bankruptcy statement? Since it was said at a DAP fundraising dinner, it may just be part of a speech aimed to hype attendees into supporting Pakatan…

“That is why it is important that you all work hard and support Pakatan. Let us win the Sarawak state government and return power to the people,” – Lim Guan Eng, as reported by the Star.

It should be noted, however, that Chong Chien Jen, Sarawak’s DAP chairman, had told the state government to take Putrajaya’s warning seriously, saying that Lim, being the Finance Minister, knows a lot about financial matters of the country as well as its states, and that Lim has “certain ways of giving warning that the state government should heed”. So maybe there’s something more in that comment after all. At the risk of slander, no, he didn’t really say this. Img by Lim Huey Teng, for MalaysiaKini.

As of the time of writing, Lim himself had not released any statement to address the issue, so guess we’ll never really know for sure why he said what he said. Still, he shouldn’t leave us hanging, as…

A Finance Minister’s quote can be very influential

Let’s face it: politicians are people too, and from time to time they got caught saying weird (and often controversial) stuff. Some, like Maszlee’s black shoes fiasco or Teresa Kok drinking palm oil, turned out to be a goldmine of lulz and kept Malaysian internet trolls entertained for months on end. 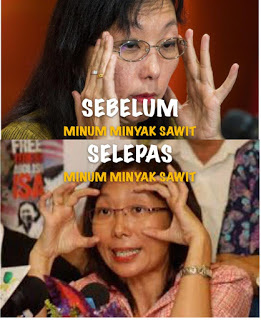 Oh lawd there’s a full page of them at The Antics of Husin Lempoyang.

But other times, like in Lim’s case, it’s apparently important enough for us to write a whole article on it. For one thing, according to the Sarawak Business Federation (SBF), an umbrella body representing key organizations and industries in Sarawak, such an ‘oversimplistic’ and misleading statement from Lim may impact Sarawak’s market outlook towards investors.

“While SBF notes that Lim was making a political speech at a political event, we feel very uncomfortable with such a sensational statement. His bankruptcy statement directed at Sarawak is irresponsible and much regretted,” – part of a statement from SBF, as reported by The Star.

Besides potentially hurting Sarawak’s reputation, it may be hurting his own reputation a little too, especially since a year ago Lim made a whole speech about being resolute in not telling lies, even white ones, when it comes to the country’s finances. And for a minister, especially one in charge of finance, reputation is something to not take lightly.

Unless… he wasn’t lying, and it’s actually a subtle message that the federal government would stop Petronas from paying the 5% sales tax and revoke all annual royalty to the state, as theorized by a GPS MP. Dun dun dunnnnn.