Ok. You guys know United Malays National Organisation (UMNO) right? Indeed, the grand old party has been around quite literally even before independence, and while there were a few scares, it would be hard to imagine a time where UMNO wouldn’t exist anymore.

….UMNO might be in a bit of danger.  There’s been quite a bit of speculation going on that the party may be disbanded, and it probably doesn’t help the situation when senior party leaders such as Johor UMNO chief Hasni Mohammad began calling for a new-and-improved UMNO in case the current party ends up like this:

“If the government dissolves Umno, what they will have done is get rid of Umno, but what they can never do is silence the party’s spirit among our members. We will make sure that the three million members we have will not become a party-less group,” – Hasni Mohammad, UMNO Johor chief, as quoted by Malaysiakini

How did UMNO get into this literal existential crisis anyway? Now some of you would probably say “when they lost GE14” buuuut we feel that for a more direct link, we might wanna turn the clocks back to last week, when…

Alright so last week, Latheefa Koya and the MACC dropped a huge bombshell by naming 41 companies (click to read who got how much), individuals and groups that have received money from 1MDB in a civil forfeiture lawsuit. According to the MACC, UMNO got the largest slice of cake from the RM270 million that Latheefa Koya and co are trying to get back, totaling RM212 million. In response, UMNO’s acting president Mat Hasan argued that even if UMNO did take money from 1MDB it wouldn’t be possible to return any of it as it’s already been used, and the current money frozen by the govt is clean. 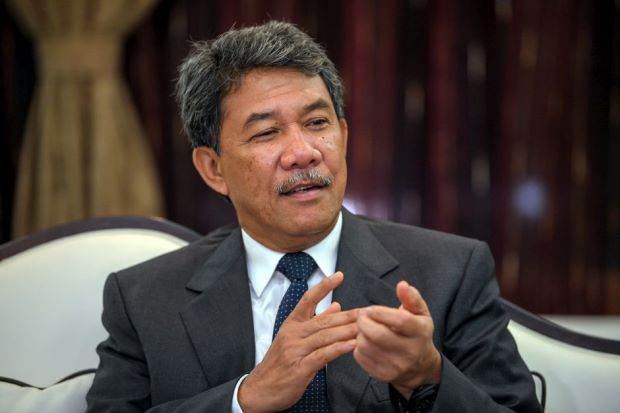 Now here’s the part where the Registrar of Societies (RoS) gets involved. Amid all the buzz surrounding UMNO and the MACC forfeiture suit, Pakatan Harapan Youth filed a complaint against UMNO to the RoS for taking RM212 million of 1MDB money. Leading the complaint is Pakatan Harapan Youth Chief Syed Saddiq, who also added that they want the RoS to take stern action against UMNO for taking illicit money.

“In the past, Bersatu was forced to disband by the ROS in the last moments before the 14th general election because of technical issues… As such, on the principle of rule of law, the ROS must mete out stern punishment to Umno for receiving RM212 million in illicit funds as attested to by the MACC,” – Syed Saddiq, Pakatan Harapan Youth Chief, as quoted by Malaysiakini Dramatic recreation of Syed Saddiq reporting UMNO to the RoS

For this case, the RoS is referring to Section 13 of the Societies Act that would matter to UMNO, which states that they may cancel or suspend any society if it is found to have been used for ‘unlawful purposes’. Whether or not MACC’s allegations are unlawful enough tho remains to be seen laa.

Oh wait, Syed Saddiq’s Bersatu was on the receiving end of an RoS dissolution order before too. Days before the Dewan Rakyat was dissolved for GE14, they were given a dissolution order after failing to submit some documents requested by the RoS. Once Pakatan Harapan won, the case was dropped.

Going back to UMNO tho, following Harapan Youth’s report to the RoS, Johor UMNO chief Hasni Mohammad would make the aforementioned statements about UMNO either joining an existing party or starting anew if the RoS does dissolve UMNO. Zahid Hamidi, the UMNO president who’s currently on gardening leave, meanwhile said that he’ll leave the decision to acting president Mat Hasan about whether UMNO will be dissolved or not. Home Minister Tan Sri Muhyiddin Yassin also gave his two cents into the matter, stating that he has no control over the matter. Instead, it’ll be left to the RoS as tho whether or not action will be taken against UMNO. Former UMNO leader Rahim Thamby Chik however wasn’t so calm tho, saying that the current UMNO sins are a lot worse compared to UMNO in the late 80s, when they did get dissolved.

And yes, for those of you avocado-eating millennials, UMNO had indeed been dissolved before.

The UMNO you know is actually UMNO II Ku Li in the middle shaking hands with Mahathir. Image from Utusan

Let’s go back to the 1980s real quick, a time when the Proton Saga was the new hit ride in town, a McDonald’s value set only cost RM2.70 and Boy George’s Karma Chameleon was all over the radio. It was also the decade that UMNO – and Malaysia as a result – would see one of the worst political crises ever. We weren’t kidding about the McDonald’s. Image from Lowyat.net

It began in 1987, when for the first time in his presidency, Dr M was being challenged for the spot in the UMNO elections. The challenger? His former Finance Minister, Tengku Razaleigh Hamzah, better known as Ku Li.

The elections would prove to be divisive, with two camps being formed in UMNO. Mahathir had trusted men by his side in the form of Ghafar Baba and Anwar Ibrahim, while you had big names such as Tunku Abdul Rahman and Tun Hussein Onn supporting Ku Li. Despite that, Ku Li lost. Mahathir won the UMNO presidency again thanks to a margin of just 43. Several top UMNO positions also went to Mahathir’s supporters.

“Very sadly, I have to make a finding in law that, at the material time, UMNO was an unlawful society,” – Judge Harun Hashim, as quoted by Malaysian Bar

This decision would lead to a huge domino effect for Malaysia, such as the formation of UMNO Baru to replace the illegal UMNO, a Chinese Acting PM and the supposed end of judicial independence in Malaysia. Our takeaway from this episode in relation to the topic of this article is basically this: there’s precedent. UMNO as a party has been deemed illegal under the Societies’ Act before, and could again be deemed so in the future.

In any case, as for the current UMNO, regardless of what the RoS decides to do, it should be done with transparency in mind. When the RoS issued Bersatu a temporary dissolution order just weeks before GE14, some viewed it as an attempt by the then-govt to weaken the then-opposition. This time round, whatever the RoS does will be heavily scrutinised by a watching public, and so they and the govt should be clear and transparent about their actions, especially when dealing with their main opposition party.

Worst come to worst, and UMNO dissolves again, we might get a threequel. Share this article:
NAH, BACA:
8 things Malaysians immediately do when they get a new car... Which one have you done?